4.4 pentaconn outputs from Zen dac and Zen Can

I have used my Sundara on the 4.4 output of the Zen Can and i had no problem.
The cable that i was using came from OpenHeart ( Aliexpress ).

Today i received for my iems 2x 4.4 jack cables from OpenHeart i when i inserted the jack there was no sound. When i pulled like 2-3 mm on the jack i got sound again. This was both iem cables.

Then i took my Sundara and with normal full insertion i got no sound on both the Zen Dac and Zen Can, only after pulling the jack 2-3 mm i got sound.

I have checked both outputs for dirt but it is all clean.

Are both my 4.4 outputs broken on the Zen Dac and Zen Can ? or are any differences on the jacks and is it ok to use the jacks with no fully insertion.

sounds like an issue regarding left / right channel separation and what the headphones the cable doesn’t work with need something different. I get confused by this stuff, but I’m referring to TRS TRRS TRSS blah blah blah specs for single ended and balanced cables.

perhaps some headphones can’t do a balanced connection? I know that is a thing as my NAD HP-50 can’t run balanced.

@CarterK_iFi Hey buddy any thoughts on this problem?

I know this issue. The OpenHeart 4.4mm to 2x3.5mm and some of the 4.4mm to 2x2.5mm cables with the golden 4.4mm plug are not really built according to the pentaconn specs; they are longer. My ZenDAC and ZenCAN shows the same issue with these cables but its not really the fault of the Zen* devices - you are simply connecting the wrong parts of the TRRRS plug in the socket if you fully insert the plug.

If you look up the product page on aliexpress of the OpenHeart 8 core cable with the golden plug, they explicitly state that their cables do NOT work with the ifi ZenDAC.

I helped myself with some heatshrink around the part that of the plug that you grab with your fingers (I don’t know the English word for it). The heatshrink extends a bit in direction of the connector and fills the space between plug and socket creating a kind of 1mm thick spacer… it looks a bit odd but it works on all 4.4mm sockets of my amps and dongles (Topping a90, singxer SA-1, Hifiman EF400, … and the ZenCAN and ZenDAC of course). When I am home, I will upload a picture. 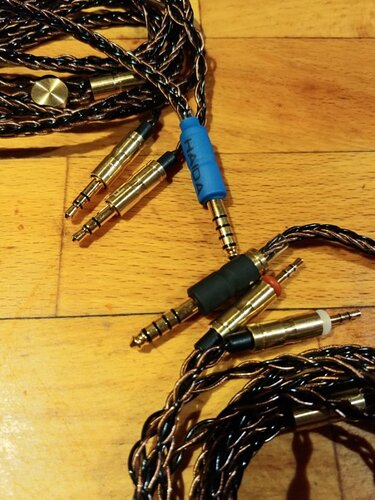 I had the same issue with a openheart 4.4mm headphone cable they blamed the zen dac but when I sent a vid showing other cables working aliexpress gave me a partial refund

guess thats why you should never buy a clone…