Here’s a little background. I currently have a LCX+SDAC unit which I really like, but the lack of single ended performance and a truly balanced dac is bothering me, so I’m returning it since I’m still in my return window.

I currently have a budget of $500-$600 to spend on a amp + dac setup. Can be a stack or a AIO, I can do either. It has to be both balanced amp and dac. I will mainly be running 6xx, 58x, and 4xx all with balanced 4pinXLR on this unit, and will probably be picking up a pair of Sendy Aiva and Neumann NDH20 in the very near future.

I’m currently debating between the Monolith THX 788 and the Aune S6pro. Everyone says THX is mind blowing but I’m doubting whether it really sounds that much better than my LCX. The S6pro just looks really aesthetically pleasing to me and on paper it seems like a beast, there’s really not that much to go on it tho since it just came out and I was only able to find one review, which was very positive on it.

Disclaimer: Aune S6 PRO was sent to us free of charge in exchange for our honest opinion. We thank team Aune Audio for this opportunity. My video review is right here: At München High-End Show 2019 that was held just few days ago Aune Audio...

Whatever I get is gonna be my endgame for the foreseeable future, so i can then just focus on headphones. Any recommendations are appreciated.

I had considered the Topping DX7S and the Aune X1S/X7S stack before buying the Monolith 788 Desktop.

For features the 788 is great, the sound quality is great too, but the reason you get it is for features with a great base of having a good amp and dac built in.

I decided on the 788, seems like the best bang for you buck when it comes to balanced amps+dacs right now… plus there was only one left in stock on amazon today when I checked so yeah… panic FTW!

I’m sure it’s amazing and I’ll love it, it has too much positive feedback to not deliver.

I think you made a good decision, fwiw.

A tip from consumer to consumer: if you have been watching an item on Amazon, had it in your cart, or “saved for later” list, both Amazon and the company selling the product get analytics on your shopping stats. They can manipulate the amount of items in stock to make you panic and buy the item you’re looking at. I’ve been bamboozled into doing that too many times now. I started to see a trend. I would save something that I was interested in, but on the fence about. But after a few days, the stock would suddenly plummet and I would buy the item out of fear that it would not be on amazon for a long time. Then, a day later after I bought it, the stock would return to normal levels. It’s not just my experience either, it’s a factual thing that goes on behind our backs as the consumers. Just a warning to your future purchases on Amazon. I checked the stock of the 788 just now and it says “14 in stock”. They tricked you too. It’s not a conspiracy, it’s just business.

Hahaha that’s ridiculous. I never knew that… Wtf I guess it worked out in this case tho, it made me stop. Being so indecisive

Yeah sometimes a push is good. In this case it didn’t matter as much because you ended up with a great product well worth $500 anyway. But I personally don’t like to be manipulated and I want as many people to know as possible because Amazon is still a business who needs to make money. Sometimes we all just get caught up in thinking at businesses are all about us and making us happy. When in reality we are being used to hand over our money and we don’t even know it. 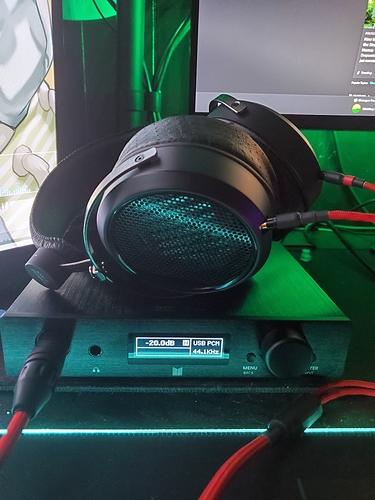 Looking pretty slick, got a few hours of listen time so far and can definitely tell a bit of difference between this and the LCX+SDAC. For me it seems like the LCX was darker than the 788. This sounds brighter and just a bit cleaner in comparison, even though the LCX was a really clean sounding unit to begin with. With some burn in time (yes I believe in amp burn in to an extent) it will be interesting to see how the 788 comes into its own.

I haven’t really messed with eq or Dirac stuff too much yet, I didn’t really buy this unit for that stuff… I’ll probably check out Dirac application though when I’m gaming to see how it affects positional awareness.

With the right headphone it is majestic with dirac and gaming, also dont discount its effect on movies, it sounds really good with movies too.

The LCX is known to have a little warmth to it.

Glad you like it so far, I’ve had no complaints with mine.

I have messed about with DIRAC for music, movies, and YouTube. I think it do like it with movie and some YouTube more so than music.