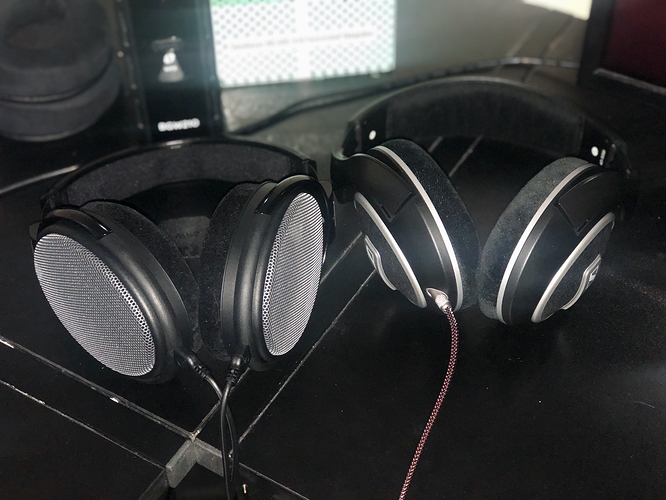 KwyafTY.jpg2048×1536 1.01 MB
Build and Comfort: 58x are better built with better plastics and more use of metal. This style has been known to last for years. 559 might break in the long term as the plastics weaken. You’ll most likely get failures on the adjustment sliders since those are also made of plastic. The 559 is more comfortable because my ears have more room to breath in there. 58x are still comfortable its just that my ears touch the foam that covers the drivers and that just bothers me. Both clamp pretty hard. The headband padding on the 559 is softer and more comfortable to me.

Sound Comparison: The 559 sound very similar to the 58x. 559 has slightly less mid bass emphasis and slightly more forward treble. Bigger sound stage but not as good rear imaging (noticeable when listening to Letters by Yosi Horikawa). The 58x is a bit more detailed and more even. Both I would say are very smooth and relaxed sounding while still maintaining excellent clarity. Never tries to hurt you with sibilance. 559 might have a slight hollow sound to the mids which isn’t noticeable until you hear the 58x. These are tiny differences though. The only real noticeable one was the mid bass response.

Gaming: Kinda a toss up. The 58x is a bit more accurate with its imaging, more specifically its rear imaging. I could easily hear where people were coming from. The 559 gave me more space which added a bit more immersion. The rear imaging was a bit vague though so when someone was sneaking up behind me I can barely tell where exactly he was coming until I turn around then I could accurately pinpoint where that sound is coming from. The 58x didn’t have this problem.

Conclusion: The 559 are a great buy at $100. You’ll get similar performance but if can afford the 58x then I’ll get those instead because its a bit more refined and slightly better built.

I have Dekoni Fenestrated sheepskin pads for the 58x. I’ll talk about how those are sometime on the official 58X thread.

Sweet, thanks for the review. I was wondering about the 559. Sennheisser has so many headphones lol. you can get lost in there.