A new type of cable that could potentially be a game changer for audio?

I just saw Linustechtips put up a new VIDEO on the new Corning optical thunderbolt 3.0 cable. It’s priced at $360 for 5 meters and $480 for 50 meters. The neat part is that it’s optical, so emf can’t affect it. The main cost contributor is the manual labor portion due to the high level of care needed to assemble the ends.

I think this is super rad and can’t wait for it to become more widely used.

If I remember rightly, the issue with optical is that at the moment it carries lower bandwidth, as well as being much less sturdy than other types of cable. That being said, I saw the video Linus did and it uses USB C, no optical that I know of uses USB C on audio devices as of yet so we will have to see if it improves sound quality in anyway, unfortunately Linus didn’t mention it; he just spent 10 minutes running cable around his warehouse to put his GPU 50 metres away from his computer

It’s a Thunderbolt only cable, it does NOT support USB-C at all.

For the first time I’m actually impressed by a cable and don’t think the price is totally out there. Granted I wouldn’t have a use case in my own setup, but that’s pretty damned neat.

Unfortunately it’s still converted to USB. This is great for location of hardware but I’m not seeing much in the way of benefit from an audio standpoint.

USB for audio suffers from two things, 1) USB noise which can be helped to a large degree by quality USB converters, UNISOM et al. 2) The time domain which is muddied by USB audio signal needed to be converted into I2S to communicate with the DAC.

It’s this second problem that this cable doesn’t address and why getting off USB and cleaning up the time domain (with a DDC) that goes a long way towards improving your audio quality.

Yup. Thanks for the correction.

aside fro the fact USB 4 and TB4 are standards that include TB3 over the USB C connector, with USB 4 being a bit fragmented as not iterations ‘will’ support TB3.

USB to SFP(+) Adapters have existed for a while. 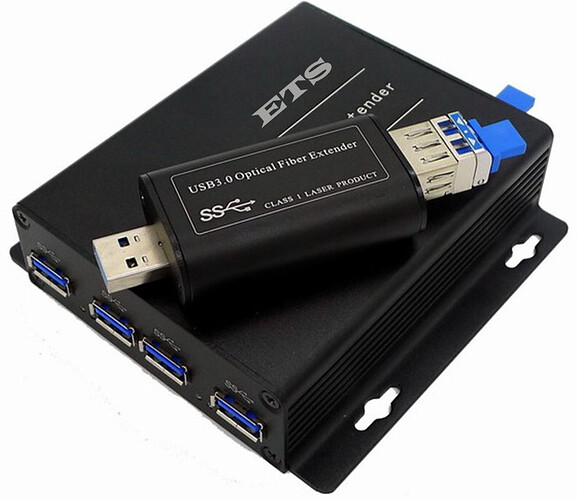 Looks cool! What’s it gonna cost? This of course is the biggest downside of fiber connectivity. Not so much the fiber itself, it’s the SFPs that drive the cost of the solution.

In that respect, I see it the same way as Usb cable.
Forwarding ones and zeros with relatively few advantages.

I would put more emphasis on shielding the cable against electromagnetic fields and possible smartphone interference when it is close by.
And you can get that for 30-100$/€ and it’s enough. And also these cables can transmit 40 Gigabit.
Anything else is, in my opinion, snake oil to sell.
In the meantime, you can almost say that a good standard cable from Audioquest is enough.

It seems as though the price is set pretty high currently. Around $400 or so. Hopefully the price can come down to a reasonable level. As some users have pointed out, it seems as though my excitement was a bit premature. The usefulness in the audio world seems a bit limited and due to the existence of already established standards, there is little use for it . For those of us who only have thunderbolt available, this seems like a neat option. Still a bit too pricey though.

What does it do for audio that you can’t already do with existing cables? Serious question, as once a cable does it’s job of transmitting the signal with no signal degradation which affects audible quality then what more is there for it to do?

When I originally made this topic I was under the impression that it could replace traditional PCM connections. Due to being thunderbolt and optical combined. The lack of EMF interference coupled with a high transfer rate was what got me asking the question. Turns out it’s not so groundbreaking and is really not so great for audio. So to answer your question nothing is special about these cables haha