About the Placement of the Power Switch

Before you read this thread, I would ask you to answer this poll:

On your Headphone Amp, where should the power switch be?


I am aware how order in which arguments are presented influences perception. For more info on Biases, click here.

Take the typical building blocks of an amplifier. You have a power supply, power filtering, input/gain stage, volume control, pre-amp stage and the output stage.
While you could put those into seperate boxes and task the user with figuring out a setup, most companies instead opt for an internal layout similar to this here: 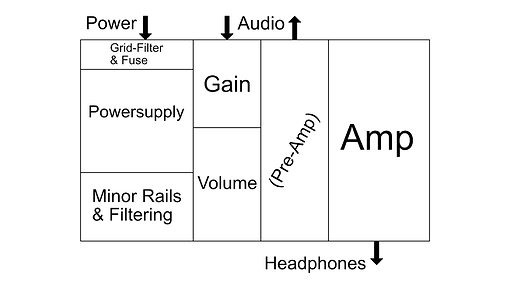 From the above layout, it becomes pretty obvious why a power switch in the back is easy and clean to implement. The power comes in there anyway, so why run it to the front just for the switch?
I’d like to note at this point that input filtering, PSU and ouput filtering could be reversed from the above layout, so no need to run the power back to front and back again.

As the components of most signal chain have controls in the front and connections in the back and may be situated in a component rack or under a computer monitor, forcing the user to reach behind the device to switch it off may be less desireable.

This issue is compounded for devices that can be rack-mounted in 19" racks. In those cases, the back may be impossible to reach due to back walls and longer devices blocking access.

Layout Considerations
There are electrical components that can be left in circuit (= connected to power) without any concern, like fuses and ferrite cores. In the UK for example, every socket has to have an appropriately sized fuse for the device it connets to the power grid. Those fuses are connected to power constantly. The danger with so called live fuse sockets is the shock hazard.

“Computers have Power Switches in the Front”
Except for some very old or specialised machines, they actually do not. The “Power Button” in the front (and on most laptops) works purely through software. It tells the BIOS and from there the PSU to start up.
The true power switch of computers is located on the PSU next to the power input.

Mechanical Extensions
Instead of running wires/cables/traces to the front, it is possible to run mechanical links to the front. Some high-end Amplifiers have their volume pots situated where they fit best electrically and then run axels to the front panel. Just like industrial cut-off switches run physically seperate the operator from the switch contact, this could be done for devices like headphone amps.

With these arguments presented, I pose the initial question again:

On your headphone amplifier, where should the power switch be located?


Did you change your opinion after reading through this thread?

Thanks, @MazeFrame. I agree the power switch on the back makes logistic sense for the amp’s layout. I don’t think that overrides the ergonomic needs of a human user, though. However, I can see why additional wires/traces from front to back for PSU and switch creates additional work. There are materials to buy and additional EM fields to account for because of those longer wires. I also don’t buy that it’s a meaningful cost saving measure (which you didn’t say buy I’m assuming given how companies typically behave) to put the switch on the back. Now dirt-cheap units like the Atom and Liquid Spark have front panel power switches and sound great too.

Engineering wise yeah sure put it in the back. But when its in the back it now becomes a hassle that prevents the switch from fulfilling its purpose. A customer should not be inconvenienced by the manufacturers trying to save a single dollar. With that said I will never buy a Schiit product.

I am in favour of the rear because it looks more aesthetic.
I’m already annoyed by these glaring led dots, here I shine like a traffic light.

If the switch does not light up and there is no LED, I could possibly live with it in the front.
Just like the old stereo units as an example.
There will come a time when Dac/amps will have a Led panel See Rme Adi,Matrix Audio mini Ipro 3.

Apart from that, the panel should be dimmable and switchable, so that you are not unnecessarily forced by the lighting.

Certainly for racks you have to mount it at the front if they are permanently installed.There is no question.
Of course, the other side is that some people don’t have the space to get to the back when they set up their dac.
So you almost have to think about it before you buy.
I don’t care how the current flows as long as it sounds good to my ears.

the power switch on the back makes logistic sense for the amp’s layout. I don’t think that overrides the ergonomic needs of a human user

Another something to consider: Inductors and transformers vibrate, LDOs get warm (hot). So internal grid-voltage cables need to be properly routed, tied down and preferably double insulated (even though it is internal wireing).
Running 230V (or 110V) on PCBs also requires some care.

I’m already annoyed by these glaring led dots, here I shine like a traffic light. 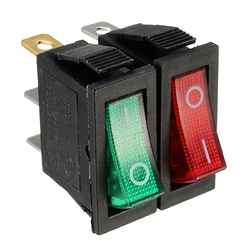 The “Power Button” in the front (and on most laptops) works purely through software.

It might be possible to use a pushbutton-controlled relay sort of like a computer power supply. No software required with a toggle (or push-on-push-off) switch.

Ill be honest, im in the i dont care camp. I accidentally put in front for the first vote but thats for the thought of convenience. Tbh i have it on a surge protector i shut on and off at the end of the night so it doesnt matter. I can see it being on the back a pia for the hot tube amps.

For PCs you can also alter what the power and reset buttons do. And if it hangs too much those buttons are unresponsive. A few times i had to flick that psu switch.

Many guitar amps have a standby and on/off. One to cut audio but let tubes still be warm and the other to go live. Would standbys be needed for audio? Maybe r2rs that are said to need days to warm up.

Last point is the obvious correct answer is on the side