Are any of the KRK speakers and subs any good?

KRK isn’t talked about much and the price varies from being quite affordable to the upper reaches like the KRK V6 S4 and KRK V8 S4 while all their subs are $500+.

My cousin has a pair of KRK Rokit 7 G4s in his computer room that he really likes as an affordable pair of monitors. I haven’t made it over to his pad to try them out since he got them (he lives in another state), but he generally has decent taste in headphones so I can’t imagine that they’re bad.

any idea how much he put down for them? pricing is confusing as some are listed as single and then some don’t have anything to clarify if they are a pair or a single and just forgot to specify. <_<

if a pair, $370 is fair…if single, even at $640 for a pair is decent but that puts them in with a lot tougher competition to provide a value proposition.

I think he got the pair for $400-something, IIRC. I’ll shoot him a text to make sure, but when he talks about them ge always mentions affordability and great value and I don’t think he would if he had paid $640+ for them.

Usually the better monitors are single pricing. Price per unit.
I heard and listened the KRK RP8 G3 short time in pretty bad/hard wall room and location of speakers was not god so the bass definitely needed calming down but they pretty decent price wise.

Depends of use or purpose mainly but ok starting point if starting like small DJ things or just music stuff. Listening etc. Monitor size also plays a role, what purpose and sub things.

The G4 series seems to have 25 x Graphic EQ so it maybe better for placed/fitted in rooms (room app) than the older Gens.

RP maybe bit large in cabin size. Less features and not as detailed or smooth as the world leaders but they also in very different price range.

The better models have more features and are bit better in every way.
Like auto power off, amps and overall performance is just better.

My cousin texted me back. He says he got them on sale for $209 per monitor and they came with a pair of stands. Normally he believes the Rokit 7 G4 are anywhere from $249 to $279 per monitor from what he has seen.

I have noticed that KRK are being sold with a different Bundle kit (stands).
Floor, desktop, table. 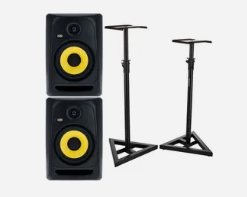 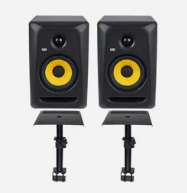 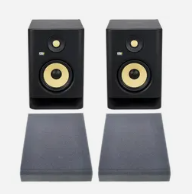 Some with volume mixer and cables. 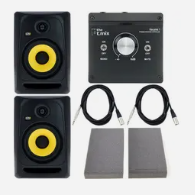 Pretty much plug&play stuff.
Those are in Thomann and seems Sweetwater has some to.

For the money there are better pure fidelity options (in my personal experience but YMMV) however it’s feature set for the price is good to leading - built in but very limited EQ. It does appear that options at this level seem to be more limited in the US than what I am used to in Europe…

The KRK you see absolutely everywhere for electronic bedroom producers & DJs as for the money it provides a far more powerful speaker (100watts v 70watts as the norm at 5" or 150watts v 100watts at 7"-8") than say the price bracket leaders like the Adam’s and is generally priced like 1”-2” smaller Yamaha models like the HS5. It’s a perfectly fine desktop speaker for the price at lower volume - however it does have significant hiss / noise floor issues and distorts wildly at higher volumes. Some of this is covered below if you enjoy graphs:

This is a review and detailed measurements of the KRK ROKIT 5 Gen 4 active studio monitor (speaker). It was kindly purchased new by a member and drop shipped to me. It costs US $176 each from Amazon including Prime shipping. I think these yellow...

If you can stretch to $700 I would go for - the Yamaha HS8 (around this price on sale & pretty much production industry standard for playback checks) or optimally a second hand pair of Genelec 8030C or Neumann KH120 which usually hover around those prices in Europe.

The Sound of Science