I’m using my pioneer elite recever with my little bear and I think is sounds amazing, has anyone else tried this before?

I would say that it depends on the receiver and how you are using it. If you use it’s line out into an amp, no problem. I don’t practically like the headphone outs of modern receivers, as they are usually an afterthought, even on some high end receivers 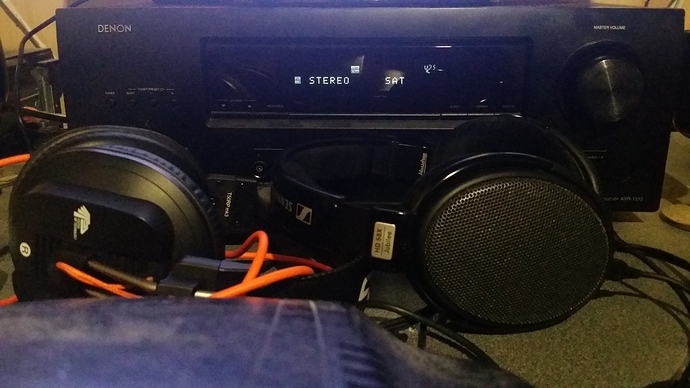 My Denon AVR-1312 headphone out sounds great. Way better than my home studios’ Edirol FA-66 audio interface (but pro audio interface DACs, ironically, seem easy to beat). (EDIT: Uh, after verifying, no, but, close enough.) Clean? Probably not. And the AVR don’t seem to power my T50RPs properly, but 60% volume is way more than enough.

Well it’s all really simple isn’t it? If you’re happy with what you have - fantastic! If not, perhaps a dedicated HP amp is in order. My opinion: don’t waste your money if you’re happy.

my Pioneer was pretty high end back in the day, its 13 years old now, back then they put a lot more money into the amps instead of adding more channels and Atmos features. A lot of home theater guys think that the early 2000s where the glory days as far as amplification was concerned.

I was kinda talking about the headphone portion of the receiver, as from the 2000’s and beyond they kinda stopped caring about that. I feel that you can still get some great receivers on the high end, but I agree that the amps in most mid range and entry level receivers are not that great anymore. For some reason I think of outlaw audio rr2160 as it’s a current receiver that sounds great but looks like its made in the 2000s lol

Ya there website looks like it’s from around that time as well LOL. The headphone out on my VSX-84TXSi seems to be pretty decent to me, it provides painful levels of amplification for my HD6xx. I am looking at upgrading once I get a 4k TV, but for now I don’t need to since i have a 3D samsung from 2012 still, I can’t believe they thought 3D TV was going to be the next HD tv back then, its so gimmicky.

I was playing COD in 3D last night, it made my eyes hurt after about an hour of play. i’ve had the TV for 3 years and never used the 3D feature till yesterday. do you have any recommendations for modern AV receivers that aren’t $1000? they are so freaking expensive spending $1000 on STAX seems reasonable once you start looking into home theater stuff.

Personally, I’m not too much of a surround sound person (and don’t watch many movies or tv), as I just like 2 channel stuff

If I were building a surround system, I would just buy a processor and a separate multi channel power amp (or multiple 2 channel amps), and if the surround sound possessor ever had issues I could switch it out and keep the good power amps

I don’t watch TV or Movies ether, I mostly use my surround sound system with my PS4, surround sound really shines with video games because you kind of get to control the sound since it’s moving all around you, its too bad boomers don’t like video games, because for me it’s way better than any 5min scene in their favorite action movie. and I’ve been looking at doing separates but I need a 7ch amp (expensive) and I don’t really have the space for it since I live in an apartment and have a girlfriend that won’t let me live like zeos.

You could get a killer amp setup with something like the Emotiva A-700 with a surround sound processor and have a nice setup. That way the power amps will never get outdated, and if something stops working for you, you can just get a new surround processor

You can also typically find some great marantz stuff used for a good price.