My understanding is that for headphones with low sensitivity and a low impedance the more power the better. That is, the MW per ohms of the amplifier is what is important…

but, in those with higher impedances that have medium sensitivities? The amplifier gives less power the higher the impedance. In addition, impedance is dynamic, there may be a variation depending on the frequency range.
Would giving more volume help to solve the problem?

Volume is just the attenuation of available power so really volume plays little involvement accept the save your ears and drivers. If you have an amplifier that has a good power supply and can handle the voltage/current swings all of your headphones will work great with it regardless of sensitivity and resistance.
Hopefully this helps drive your question into a good conversation.

It’s mostly low impedance HP that need amperage, so lots of power in the 32ohm range and high impedance HP need voltage, so less power drop in the 300ohm range
But clean power and a good power delivery mostly tops all, so a high quality amp may only have maybe 1w into 32 ohm but has more power reserve because of beefy caps than a 6w amplifier that’s build to Hope that explanation makes sense XD

TLDR answer to your actual question- no turning the volume up on the amp will actually make it more likely that you encounter clipping. There are some rare cases where increasing or decreasing the volume of your source may have some impact, but that’s going to be pretty rare.

Ok so where do ohms come in? Those are a measure of the impedance (aka resistance) of a circuit. This is basically a measure of how difficult it is for the current to move through the circuit. This is roughly analogous to the size of the pipe in our previous water analogy. The most important thing here however is that the voltage, current, and resistance are are related to each other with an equation called ohms law. That equation states that voltage is always equal to current x resistance, which means that any change in one of the three properties will impact one or both of the others. More info available here going back to our earlier amplifier operating at 2 volts and producing 3 amps, using a bit of algebra (or a calculator)we can easily calculate that it must be connected to a circuit with roughly .66 ohms of impedance.

Most (not all) amps are going to essentially provide a fixed voltage, so an increase in the resistance of that circuit would necessarily mean a decrease in the amount of current flowing through the circuit.

Ok now that we’ve gone over some of the terms here we can relate them a bit more concretely to audio amplification. Your amp will have a signal coming in from the dac that is typically 2 volts if you’re using a single-ended setup. It’s then going to increase that voltage by some amount determined by the amount of gain and where you have the potentiometer (volume knob) set to. For the sake of simplicity let’s say those end up equaling 10 volts. From there the impedance of your headphone will determine both the amount of current your amp needs to provide, and by extension, the power that will be delivered to the headphone. So let’s say you plug in a 50 ohm pair of headphones, since the amp is producing 10 volts we can take the voltage, 10, divided by the resistance, 50, and determine that you’re now drawing .2 amps of current. From there we can multiply 10 x .2 and work out that we’re delivering 2 watts to the headphones.

Why does all this matter? The first reason is that it tells us that an amplifiers ability to produce power is defined by the limits to the amount of voltage and current it can produce, and by the impedance of the headphones it is driving. For instance, if the amp can produce a large amount of voltage, but struggles to create a lot of current (an OTL tube amp would be a good example here, but many amps will struggle below 30 or so ohms as the current demand for a given power level becomes quite high) will respond better to a high impedance headphone because it will be able to provide that higher voltage without running into limitations due to the amount of current it can produce. These rules also explain why most amplifiers generate progressively less power into higher impedance headphones, as the impedance rises the amount of power generated for a given voltage drops. The last reason I’ll mention this all matters is that when talking about very low impedance headphones is that producing large amounts of current is rather more difficult than generating high voltages, and in many amps will generate significantly more distortion than a typical load even if they can technically supply the amount of current being demanded.

Going back to your original question, increasing the volume on the amp is essentially increasing the voltage being applied to the headphones, this increases the amount of power being delivered, but has no impact on the amps ability to deliver current. For our final example, let’s say you have an amp capable of delivering .1 amp of current connected to a 200 ohm headphone with its volume set to halfway up the scale, and that this hypothetical amp is producing 14 volts in that scenario. This would mean that the amp is producing .07 amps of current and just a bit shy of 1 watt of power. Raising the volume to the point that it was producing 25 volts would mean that it would need to make 1.25 amps of current, which is beyond its capabilities, and would cause the amplifier to “clip” which is a severe distortion effect created when the amp can no long produce the entire range of the waveform representing the music.

Hope that helps to clarify what these various terms and stats refer to.

Long and tedious topic. I am reading slowly.
To give some concrete information.
Headphone 300 ohms and 105 sensitivity. How much do I need?

Your phone can get those loud enough to make you def. But to get the best out of headphones I usually recommend an amp that produces 1W of clean power that’s from a reputable manufacturer.

Can a mobile phone handle that many ohms?

Yes it’s just resistance value. I’d never drive something like that off of a phone as you’ll lose all the dynamics and it’ll sound very thin. But it will be loud.

I’ve used my LG V20 with ADX5000 with 420 Ohm plenty times.
I plugged your given numbers of 105dB/mW and 300 Ohm into the headphone power Calculator 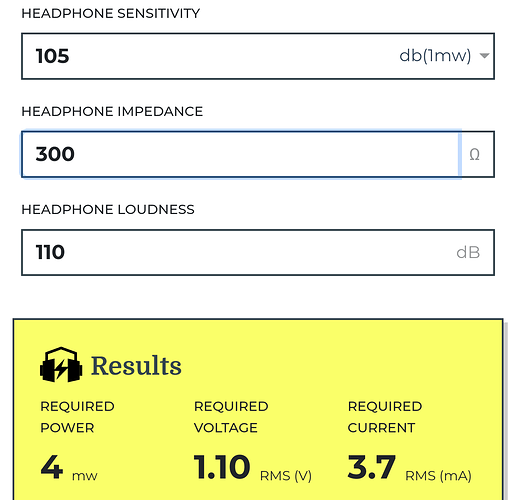 Screenshot_2022-12-20-12-45-05~21440×1397 107 KB
1.1V should be achievable with any Phone if I am not mistaken. And the current is negligible. So you should be more than fine with a phone for that theoretical headphone. Not that it’s for 110dB peak Volume which is stupid loud.
The other advice about 1W is probably meant at 32 Ohms and should yield in enough “reserve” to eliminate any notable edgecases.

But in general the necessary voltage or power for most headphones is just fine with a mobile phone. Will it sound better out of a stronger amp probably yes.

Thanks but I think that even if they are cheap headphones, it is always good to amplify and/or use a dac. Laptop dacs in particular are very bad. In mid-high range mobiles, well.

The problem with even the best cell phone amps is their inability to handle voltage swing and increasing current demands as impedance increases and sensitivity decreases. Now your 105 db/mW sensitivity rating is actually pretty efficient and helps to alleviate one of those issues. As for the other, as others have said, you should get plenty of volume from a phone and it’ll probably be decent enough for otg purposes, but you’ll also experience compressed dynamics and decreased detail retrieval from your phone’s integrated amp being unable to handle demands on the extremes.

Phone amps are for sure limited. I don’t quite remember where but I saw some comparative measurements in voltage swing between phone amps and the “usual” phone with the SoCs integrated amp is at about 1.1V while atleast my V20 with its extra ESS dac goes up to 2V. Even that gets towards its limits with a Sundara. But that’s an Efficiency issue. I don’t really think High Impedance is a negative for drivability for phones, given the Efficiency isnt bad. But I have not used any Cans that it struggled with.
Laptops amps on the other hand are so utterly atrocious that I want to cry. I can literally hear me klicking the touchpad. Wtf.

Higher impedance isn’t necessarily a negative for drivability on a phone, but it does move the lower limit for the sensitivity that can work. For the example 300ohm set 4mw is pushing the limits of the 1.1 volts worth of swing most phones are capable of, moving to a 35 ohm set like the sundara raises that all the way to about 35mw.

When I try Sundara I can’t have high volume with the phone.

The sundara is right on the edge of what can work from a phone, so depending on which phone you have it may or may not be able to apply the required voltage.

If you spoof the V20 into high impedance mode which unlocks the full voltage swing its fine. But that’s also a very specific scenario. Otherwise I can very well see the Sundara simply being to quiet as it also is in the “normal mode”