A new and really interesting headphone coming from Camerton Audio — German company run by Oleh Lizohub. Mr. Lizohub is from Ternopil, Ukraine, but relaunched the company in Berlin, Germany.

As you can see, it is an incredibly slim and attractive looking headphone. However, it seems to be featuring a on-ear design, and this is something that I am curious about, curious about how it feels and bare against common issues with on-ear ear-pads. 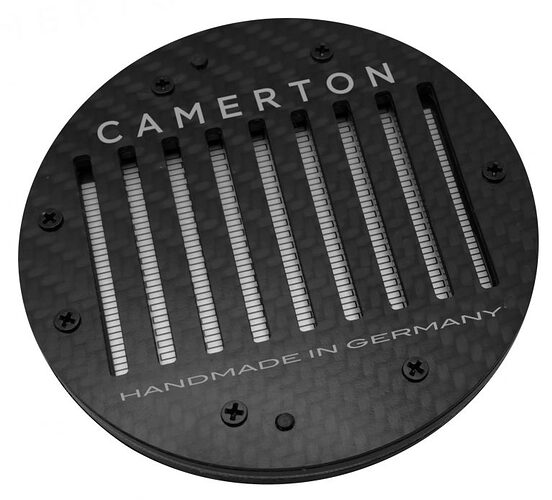 This is the driver being used.
This is the description directly from Camerton Audio’s website:

Binom-E – isodynamic driver – the perfect solution for creating the highest quality headphones. The sound in this driver creates an ultra-thin 6-micron diaphragm made of polyethylene terephthalate. Its weight is negligible compared to the diaphragm masses of classic drivers. On the diaphragm, through a special adhesive applied aluminum conductor, which occupies almost 99% of its area. The properties of the diaphragm material and the adhesive itself are optimally selected to provide the best acoustical output. Magnetic system of the driver is carefully calculated using the finite element analysis method, performed using super-power neodymium magnets. The optimal interaction of the diaphragm conductor with the magnetic field allows to maximally linearize the operation of latter, achieving unrivaled sound quality. In the driver’s design, metal parts are replaced with carbonic ones, which, in addition to the favorable effect on the driver’s sound, allowed reducing its mass by 25%. The low weight of the driver, combined with a large diaphragm area, makes possible to achieve incredibly detailed and spatial sound. The bass potential of this driver will surprise everyone. 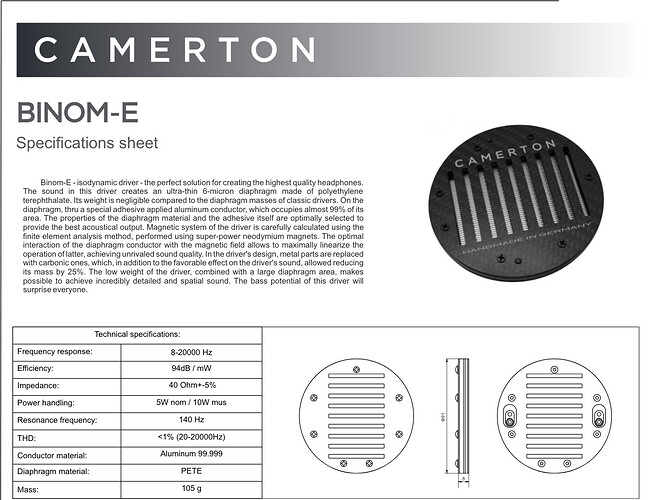 Above are some specifications for the driver.

And here is the manufacturer’s description of the headphones. There are some minor grammatical errors like saying “earbuds” instead of headband or headphone yoke.

What we know as of now is that the first batch has been sold out. 6Moons will be writing a review for these and has already published a preview about them. Mr. Lizohub already has in plan significant design changes for the second batch. It is also worthy of mentioning that Camerton Audio has lived up to its previous claims regarding specifications of their Binom-1 loudspeakers, so hopefully the buyers can share their experience under this thread.

It comes with a serious price tag of €5800 (though the headphone driver can be bought separately for ~€2000 I believe).