Hey there, finally had some spare time in recent weeks to work on some new stuff we’ve had in the works, and just launched a couple of them today!

First, a new multi-kit. The Multi-kit 6. Calling this one the budget friendly kit. 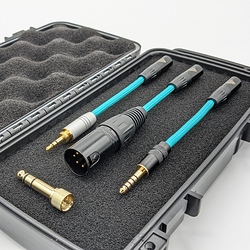 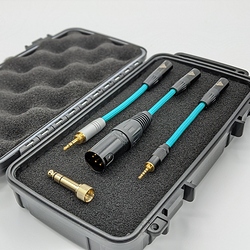 It includes a threaded 3.5mm interconnect; kill two birds with one stone type thing. Also includes the standard male 4-pin XLR interconnect, and then your choice of a 2.5mm or 4.4mm pentaconn interconnect.

The idea was to just try to get as much utility as possible in a kit to hopefully reduce any barrier to entry cost might cause for people.

Hope you dig it. It’s only available in the one color on the site for now. Not sure if this will be a temporary thing (color, product in general etc.). We’ll see how it goes!

The second thing! More embarrassingly, I’ve been doing a podcast with some friends of mine in anticipation of some other stuff in the works here, and rather than continue to bank the episodes, we’ve launched it. It’s called the club club podcast. We pick an album to talk about once a week and have a relatively short conversation about it. If you’ve emailed us, you’ve interacted with Hannah, who is on the podcast with me, as well as two of our friends, Patrick (Acoustics Engineer), and Zach (Broadcast AV / IT background).

I needed an excuse to talk to my friends more, so we created a podcast where we get together once a week to discuss an album we think is worth talking about. Very loosely audiophile or audiophile-cable-related, but hope you enjoy it nonetheless! The...

What is the RSS address for the podcast? I don’t use any of the cool kids, popular, apps for podcasts. I use a terminal app called Castero and need to add the URL manually.

Ahh yes I should’ve included that straight away! New episodes are going up every Tuesday. And I promise it gets better, lol. Gotta work out the kinks through the first ones. It’s been fun though!

I just started listening to the first episode a few minutes ago. I heard the bit where James (if that’s you) doesn’t generally like long songs or albums.

You must not like Tool then… my most favorite band of all time.

I like Tool! I like the albums through Lateralus, and then dig some stuff off of 10,000 days. I thought Fear Inoculum was not very good : (

I don’t dislike long songs as a rule or anything. A lot of the bands I like can be long-winded. We just recorded an episode on Thou’s Summit album, which is basically just four 10 minute songs. I’m just mostly not super into when bands just “jam”, which tool doesn’t really do.

And then -Time for a douchey hot take - I think Tool’s fanbase maybe pats themselves on the back a little too much for liking Tool (I’m not accusing you of this!). To me at the end of the day, they’re a pop (popular, entry-level, easy-to-get-into) band, but I get the impression that their fanbase likes to think they’re solving the mysteries of the universe or something, like people who don’t like them are just too dumb to get it. And, not that that’s any fault of the band themselves, but for better or worse it’s still a turn off for me.

As Joe Rogan said last year, I am a rabid Tool fan!

BUT, as you allude to, I don’t look at the band or Maynard’s lyrics as some kind of mystical force or anything.

I love their music but I understand and respect other’s opinions and tastes as well. Not everyone is going to like Tool, or every and any other band, singer or group out there.

You’re not wrong when you say a lot of their fan base loves to pat themselves on the back and take their fandom to an unreal level. I’m not that guy. I just really like the music and that’s about as far as it goes with me.

We all like what we like, and we all dislike what we dislike. There is no right or wrong, it’s just a matter of choice and what tickles the listener’s ears.

BTW, I love your company’s products. Y’all just sent me a shipping notification today for an XLR extension cable. Keep up the good work!