Hey Guys, looking for some advice on these DACs. Getting ready to upgrade my phone when the S20 preorders open next week, and will need some kind of device to plug in my IEMs. Also going on a trip next month and intend to use my phone as a source to test headphones. The few I’ve looked at are

They all seem to be fairly similar in price. Curious if any of you find one to perform better than any of the others. Not married to any of these particular models or even the dongle dac solution so if you have any kind of suggestion I am open to it.

Typical use case for me would be at work (office environment) and out and about while running errands, grocery shopping, that kind of thing. As mentioned above also planning to use it to test headphones/travel although that’s not a primary use as I typically don’t travel more than once a year if that.

Currently I use the blon-bl03’s. Also considering an upgrade to a nicer sub 200 IEM but am still weighing pros and cons between that and something like the sony WF-1000. Probably a separate topic altogether. Genre I generally listen to would be drum and bass, hip-hop, and various other edm, also dabble in other genres but those would be my main ones. Pretty low on priority for the device but would also be nice if I have the option to use it with my headphones on the rare occasion I would take them out of the house which are currently 660s and X00 PH. Not that important as I can’t see that being a typical use case but a good nice to have option.

All the dongle dacs seem fairly similar (and maybe they are) but curious to know if one stands out in terms of performance, build quality, or any other metric.

ok wasn’t too sure on how well the dongles pushed larger headphones. I did see zeos running the argons on the link but wasn’t sure about how well they worked for that. I would probably value the smaller size of the dongles over the ability to use my headphones unless those devices vastly out match the dongles in performance as a dac. Appreciate the input

I was in your same position not too long ago. I bought a $20 dongle dac to use with my T2s but I had to return it because although the dac was better than my phone’s, it wasn’t powering it well so the volume was too low. I ended up buying a Shangling UP2 for 80 and so far it’s been great.

might be hard to say due to the volume issue but was there a difference in audio quality between the two dongles?

Well the Shangling UP2 isn’t a dongle, it’s a bluetooth transmitter. Sorry, I should had been more clear. As for the sound quality, it’s great. It has Ldac and 67mw output power so it’ll drive a good number of things well. I’ve been using it for the gym and car speaker use. So far can’t complain. You do have to charge it unlike a dongle so there’s that though, but it lasts a good amount.

If you absolutely need a dongle dac/amp then probably go for the dragonfly red/black https://www.amazon.com/AudioQuest-DragonFly-Red-Headphone-Amplifier/dp/B01DP5JHHI/ref=sr_1_1_sspa?keywords=dragonfly%2Bred&qid=1581125265&sr=8-1-spons&smid=A3PKSUAVGUP5IE&spLa=ZW5jcnlwdGVkUXVhbGlmaWVyPUE1TlY5TVRERk9USUwmZW5jcnlwdGVkSWQ9QTEwMDk2MzcyNUZRR1A2VjRKQk0yJmVuY3J5cHRlZEFkSWQ9QTAyNTIzMjgzT1FKUzY1MTkyRUlWJndpZGdldE5hbWU9c3BfYXRmJmFjdGlvbj1jbGlja1JlZGlyZWN0JmRvTm90TG9nQ2xpY2s9dHJ1ZQ&th=1

oh the shanling is interesting. i hadn’t considered a transmitter option i could use with my car and my throw away bt earbuds i use to run. The dragonfly’s seems pretty well reviewed but i’m a little turned off by the idea of needing the dac and an adapter for c to a, part of the dongles appeal to me is the simplicity and size. Thanks for the input will have to look at some of the transmitters as well.

No problem. As for other options look into the UP4, and fiio BTR5 if you’re looking for more power/features. I looked into all of them and opted for the UP2 just cause it’s best bang for your buck if you’re not trying to power anything too demanding. In my case it was Tin T2s. Either way let me know what you end up going for

after looking into it I decided on the BTR5 good middle ground between portable with the ability to expand in the future. Thanks @BoomShroom and @M0N for your input and advice!

For future readers, the Xduoo Link is absolutely useless dongle. It has no power and sounds the same as my phone. I got it and sold it right away. ASR confirms it in his review. 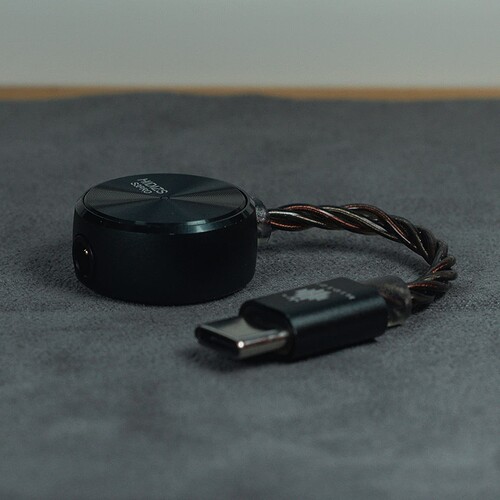 If all you are after is clean sound, the Hidizs S3 Pro is a valid choice, but I would like Hidizs to solve some of their basic issues with USB functionality before I recommend any of their products again.
My full review is up on my blog: Hidizs S3 Pro Impressions. More of the Same | by Alec | Bedrock Reviews | Dec, 2021 | Medium

Is there a dongle DAC that’s relatively safe/comfortable to use with your laptop in your lap, as in similar to what they’ve done with wireless receivers’ form factors?