Any other suggestions are welcome but I’m mostly interested in biodyna cans. As for sound , I’m rooting for massive and authoritative low end , deep and wide soundstage , decent separation and immersive sound overall. Main uses are for bass heavy music (EDM , 140 dub , etc) and casual gaming.

Hhhmmmm CFA cascade is supposed to have ridiculous bass for edm. I would also suggest the Aeolus for some of the most natural sounding bass while still having outstanding quality. After that I think you hit the bass cannons for the price point.

I had a pair of HP-3, they’re a great headphone and under $1000 would be a good price for them. However, if you’re looking for “authoritative” low end, I would check out the Focal Clear or Clear Mg. The Clear Mg on a Bifrost 2 / Joteinheim 2 stack had crazy fun bass; EDM sounded awesome on it.

If you don’t mind a somewhat chintzy feel in-hand and a slight amount of sound leakage due to the headphone being semi-open, the Fostex TH-900 Mk2, in my experience, is the king of bass-heavy electronic music. However, as bassy as the pair is, they are also bright sounding (can be nice for EDM), and will not be suitable for the treble-sensitive without a hint of EQ. I’d look for a jack-modded pair if that is something available.

(Also, if money is no object, transplanting the TH900 drivers in an ATH-adx00X chassis and pad-swapping to ZMF lambskin BE2 pads is open god-bass TOTL. I haven’t heard the AB1266 Phi TC though)

The Campfire Cascades are another option. They aren’t as technical or wide compared to the TH900 but have them beat in the mid-bass department… to a fault. I find them to have almost a bit too much mid-bass, with slam like a freight train. The earcup size is also quite small due to its emphasis on portability and small pads. They’re fun, especially EQ’d to bring up the sub-bass, but I wouldn’t suggest the blind-buy.

The TH-900 Mk 2 Pearl White Edition is really fun. They respond well to EQ and the Dekoni pads flatten out the V shape a little.

The Cascades were on sale at my local store for 570$ in April (sadly I was not looking for headphones back then). I will wait until black friday and see if they fall under 600$ again. They don’t seem to be worth at full price (selling for 900$ right now which is absurd).

The Cascades were on sale at my local store for 570$ in April (sadly I was not looking for headphones back then). I will wait until black friday and see if they fall under 600$ again. They don’t seem to be worth at full price (selling for 900$ right now which is absurd).

You’re right on the money with that last point. I snatched up a pair for $450 on Head-fi not too long ago, and I would say they’re a decent deal at that price range, but I wouldn’t pay more than $500 tbh. You might like it or hate the somewhat intimate ultra-bass.

As for the TH900, I would try and gather some prices on Head-fi classifieds of the same headphone in similar condition that have already been sold. I feel like you could bargain that price down a hundred-or-two.

Now before you go out spending dollars - let me put this out there. I’m going against what some others may have said here, but this is what I’ve found.

I’m an EDM lover myself, and a basshead turned bassophile, for a lack of a better term.

If you’re looking for ABSOLUTE bass authority, I can’t help but say that only biodynas (Denon/Fostex/EMU/Klipsch) will take you there. That’s beyond my Focal Elex’s capabilities, and pretty sure Clear’s capabilities as well. It’s as simple as that, no competition.

However - as an overall headphones, with more detail, better imaging, separation, vocal clarity, airiness etc - that’s where the Focals come in. Soundstage is a bit of a toss, but goes to Focals as well. Also, the biodynas may be a bit of a V.

So you really will have to decide.

What I ended up doing is modding my EMUs to open back. That way, there’s much lower fatigue, less V curve in the end. But these biodyna drivers are kind of brats as they don’t open up things with even no cups at the backend.

Somehow, I see recommending the Klipsch to you. Focals can’t go too low, or authoritative enough in comparison. Yes, they ARE quite the cans compared to most other open back headphones when it comes to bass.

Campfire Cascades - I don’t know, but I’m not satisfied with the drivers on those. Haven’t tried though - Call me pre-biased. Also, modding those and/or pad-rolling, if desired at any point in time, is going to be a byiatch. 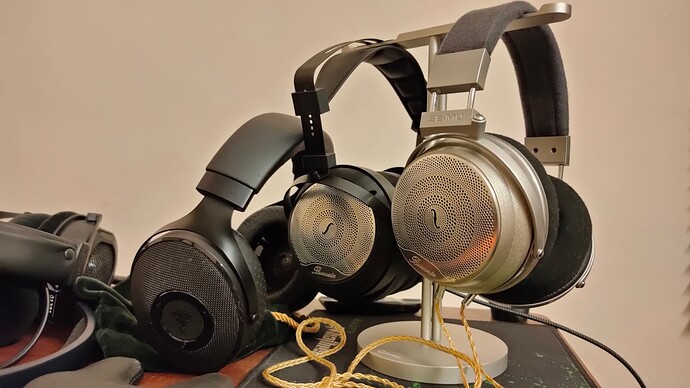 I appreciate your input , the Klipsch are definitely the most wanted on my list purely based on looks and packaging alone. TH-900 come second based on the praise (or hate for some) it receives when it comes to the sound: excellent bass quantity to quality ratio and great soundstage/imaging for closed cans. I also heard it’s possible to tame the fatiguing highs and bring life to mids a bit more by swapping pads , EQ and some other mods.
Out of the box , the HP-3 might be a more convenient purchase if I find them under 1000$ but hopefully I don’t miss out too much on the low end presentation compared to TH-900. I’ve seen some comparisons here and there but they weren’t detailed enough to help me decide. It was basically TH-900 > HP-3 for EDM but that’s not enough to justify anything for me.
Also , I assume the Cascades fall short in terms of bass quality compared to any biodynas. They might atleast compare in quantity and slam but lack in extension , resolution/detail (one note tone?).I’d also assume that they don’t come close to the TH-900/HP-3 when it comes to soundstage/imaging and overall coherence. I guess the Cascades are more comparable to the TH-X00 overall.
Correct me if I’m wrong , I’m only describing this based on what I’ve read about other people’s experiences from various forums and threads.

Yes I think the Klipsch may deliver up to the 900s performance, if not at that level. Yes, the 900s Achilles heel is the issue with the highs (from what I’ve read) where people end up actually appreciating the EMUs or some other Fostex instead. Sometimes I wonder if the value of the 900s is like primarily and predominantly in those pretty ass cups. But that must be the most of it, really.

What you will get with the klipsch is a much more balanced sound. I think they may have fixed the issues Fostex may not have quite addressed - until the 909s that is. So again, with the semi-open back on the HP3s, you’re looking at good stuff. Might even not require any modding to be done from your side either. And pad swapping should be very convenient too.

TBH these seem to be built the best too, I don’t think any Focals or any of these other options come close to the build quality of the HP-3. Heritage stuff: oh fosure. And damn if they don’t look sick!

Anyhow so this is my advice.

What are those cups? Are they custom? They look familiar but I can’t make out the name at the bottom. If they are custom that’s an amazing job.

Yes Bobby, the name you’re looking for is Burmester.

I 3D printed these open/semi-open back cups for both these cans and I settled for the burmester grills for the finishing touch. The paint job on the EMU came out nice - doesn’t even look 3d printed until you look real hard and real close. The m1060 isn’t even painted, looks well as is, with a matte finish. I like the pattern as was in the design. 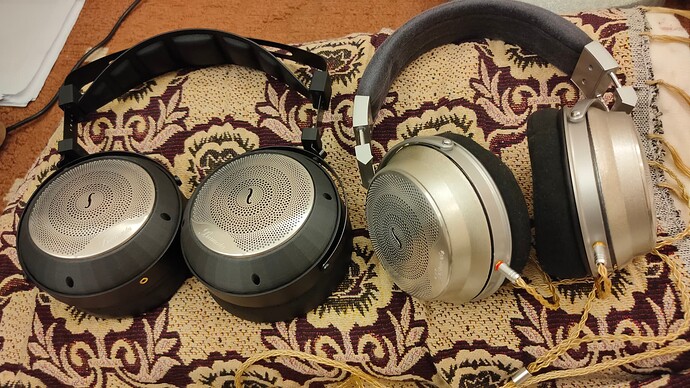 Found some used TH-X00 Mahogany selling for 400$ in my region.They come with an extra pair of Dekoni sheepskin and detachable cable. User claims they’ve been used for less than 100 hours but they seem to have a scratch on the right cup. Any thoughts on this? Do they even compare to the TH-900/HP-3?

You mean a TR-X00. Worth considering in my op. Saving on some bucks with 90% of the sonic performance, open to modding.

HP-3 may be better, but so is the cost then, to consider, so there.

Man the are beautiful AF! I’m practically foaming out the mouth.

They often refer to it as your Holy Grail rather than endgame. Yes, may be expensive, may be economical, big or small. But they hit the spot for YOU, and that’s what matters.

Here’s a very interesting article I read that guided me in the right direction: I've Found My Holy Grail of Headphones: The AKG Q701

You have to find the one headphone that actually satisfies most, if not all your desires, and puts you in a state of serenity and contentment. Otherwise, there’s no stopping.

I’m currently waiting for some answers from the TH-900 owner. Do you guys think 1050$ is a fair offer for a new pair? It’s too hard to decide between these and the HP-3 after all the reading I’ve done about them. I might even end up buying both , but I’m trying to resist the temptation since I also need an amp/dac upgrade as well. Apparently these cans need to be fed atleast 1W to get the best sound out of them (one of the reasons why the owner is selling them besides having too many pairs of hps).

First - yes more juice would be better - did you mean 1 watt? That’s understandable.

But these are 25 ohms headphones. These are VERY EFFICIENT headphones. Yes, a good DAC/Amp will surely give them more oomph and control, but you could run these off a phone. I remember trying my EMU with a cousin’s iPhone 4S (yes an iPhone 4S) and the output being OVER THE LINE for my EMUs. DAC/Amp = surely recommended, but definitely not required.

Second - buy both? Why’d you wanna do that now? That’s silly. You really want to lose lots of money and time over trying to sell one off after? Nah bro. The 900s, ironically, do have ‘heritage’ value to them. The HP-3 seem to be better built and maybe even sound (remember, the 900s are a delicate headphone in the end. All of these Fostex TH/TR/Denon 2000/5000 etc are - the frame does have a failure point, and some unfortunate pairs have snapped off at the pivot/swivel screw - the weakest link. Anyhow, shouldn’t scare you off, that bit. But HP-3 might be the pick here. Or again, you could simply skip on this whole charade and grab the half priced fostex 00s.