So I was looking for an entry level OTL amp for my 6xx and the options that I found were pretty limited (considering that I’m in Austria):

until I saw some posts from @M0N that the Eufonika H7 is a valid alternative in Europe.

So after some Googling I ordered the H7 from Etsy.

While my experiences with Tube Amps are pretty limited (until now I only got a Loxjie P20) I can say that the 6xx really sound amazing on the H7. The sound is fuller, more lively and the lowend has more texture, impact and punch to it. Really amazing what the tubes can do for that headphone.

So next step I also tried my other headphones (Zeus, Sundara, Elegia) on the H7. While for both Zeus and Sundara it didn’t add anything remarkable, they sounded ok! No distortion, though the Sundara feel a bit lacking - but I wasn’t expecting much here since everyone says that low impedance planars do not work well with entry level OTLs. Still the H7 achieves passable results here for me.
Surprisingly the Elegia sounded very lively and enjoyable on the H7 - very nice experience.

In addition to the sound the build quality is excellent in my opinion. The case is wood, everything feels solid it has some heft to it. Really beautiful thing! 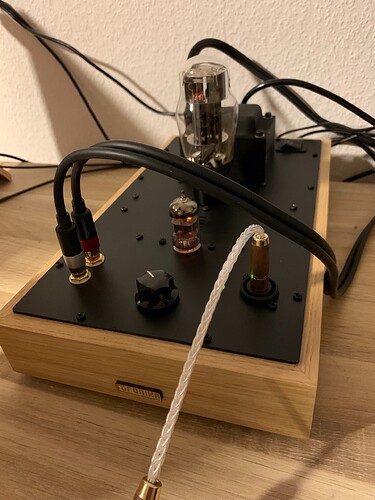 TLDR: for those looking for an entry level OTL in Europe, I think the H7 deserves much more love and attention.

Sweet, glad you are enjoying it, pretty great amp for the price

While we’re at it… @M0N do you have tube suggestions for the H7?
I’m afraid that I can’t help myself from trying different tubes

I took a look at your link and saw the maker put some rolling suggestions down:

yes I was more referring to certain brands of these tube types … or should I consider any of them being actually from the same manufacturer, independent of the brand?

So I’m not really one to ask for that, I’m not super familiar with what’s going to work best with that amp, I think I’ve only heard it in stock form (or the friend had already swapped and settled on something but I have no idea what they were). I would generally look for NOS for those tube types (if any still actually exist lol), but I can’t really advise on what to try out in there. If you just got it I’d honestly just use it for a few more weeks before deciding to swap anything out so you can see if you are already happy with it, or know what aspects you want to change/improve

I see - np.
And ofc the plan is to spend more time with it. But I started reading and … well you know how it is.

It’s a permanent conflict between 2 voices in my head: “oh that sounds nice, you need to try that!”, “no you don’t! You are good with what you have!”, “But it seems this improves it even further!”, “Just because some random guy on the internet says that, means nothing!”, “Ok then let’s look for other opinions and experiences!” …

Do you happen to know which capacitor was installed on the 6as7g socket?
Depending on which one is installed, the 6as7g can mask something or be good.
But I have to say that the tube is dying out.
They are only available from Svetlana and Rca.

The situation is different with the 6080 tubes.
General Electric tube tends to be analogue and a bit slow, you have to try it, it’s really not bad, plays a bit more forward in the midrange.
Could push the Sennheiser a bit.
Mullard is sweet and plays quite low but will probably overwhelm the 600 Sennheiser in the treble range because it goes down quite low.
Tonally typical British sound.
Try a 6080 Sylvania instead, it’s on par with the Mullard.
It has a bit of bite in the bass range and doesn’t play as low.
In other words, the opposite of Mullard.
Also goes in the direction of a British sound, but a bit more in the direction of an Us sound.
A Gec if you can find one but will probably be too expensive.
Mullard is not cheap either.

Ecc88 is nothing else than 6922, you can take it, the market is well saturated with new productions that are quite good.
As far as Nos are concerned, I am not up to date on the genre, but if you find something, it may be worthwhile.

What always works well and is very good is a British tube like the Mullard and a Japanese Ecc88 if there is one.

Otherwise it’s a nice amp you have there.
With the Eufonikas, it is advisable to have them converted to Milfex capacitors, as the range is mostly very well covered.
I don’t know what Wislaw installs as standard.

@M0N do you have any thoughts on the other Eufonika amps?

I’ve only heard the H7 so I can’t say

Here they are again – these voices in my head. The reasonable one telling me to enjoy what I have and the suggestive one making seductive suggestions.

@Deleeh thanks for your suggestions! The GE, Sylvania, Svetlana and RCA seem easy enough to get here, also for more or less reasonable prices (if you consider that most of the time the shipping costs about as much as the tube itself

Do you happen to know which capacitor was installed on the 6as7g socket?

What always works well and is very good is a British tube like the Mullard and a Japanese Ecc88 if there is one.

Interesting, thanks for that input. I’ll read into it.

With the Eufonikas, it is advisable to have them converted to Milfex capacitors, as the range is mostly very well covered.

Hello,
No problem.
My suggestion is to give the amplifier time, lots of time.

It takes a while for the tube to melt.
This can take up to 400 hours.

I don’t know exactly what the Milfex do with the Eufonika.
There is always more to it than that, such as the transformer circuit, etc…
I’ll try to generalise.

If it’s a good circuit and a good transformer, it’s often half the battle.
Sometimes a capacitor can be more worthwhile than an overpriced tube to achieve similar results.
But it doesn’t have to be.
There are capacitors that have proven themselves in tube amplifiers and some that have not.
The market is big when it comes to capacitors.
From cheap to expensive, from lies to truths.
Just has to be said.
And of course their construction, capacitors with oil, Teflon to nothing special, as well as with paper without copper/silver foil ect ect.

You always have to do a bit of googling to find out which ones have proven themselves.
To name a few, Vcap Odam, TFTF, TF CU, some Duelund, Milfex, Audio Note.
Audio Note and Vcap are more the crème de la crème and cost a bit even if their results are very good.
Let me put it this way,with such capacitors you have another good opportunity to push the tube like General Electric,Sylvania a good bit to their limits and exhaust them.
The similar and very close performance comes close to the limit of what an “expensive” tube can do.
Without pretending anything, it is of course subjective to the listener and may not be pleasing after a capacitor change.
Which is rather rare.
The other thing is that there are also expensive tubes that are less good.
And people only speculate on the name.

In the end, this is more a step for connoisseurs, or if you are prepared to go one step further, once you have bought 3-4 tubes, tried them out and listened to them.
And you don’t have to change the capacitors.
Much more what you should keep in mind.

Unfortunately, there are manufacturers who like to save a little in this respect and you also pay a lot of money for it and then find out that the capacitors used are standard market ones.
And sells the amplifier as totally neutral or something similar.
There is also only a small part that is willing to change the capacitors.
Either because they can or because they have the money.

As I said, go slow with the Eufonika, take your time, try out two affordable tubes.
Everything else can surely help Wislaw to take the next step.
And also to find something suitable for you.

@Deleeh thanks for your explanations. I guess that’s exactly why this hobby is such a rabbit hole. It’s about experimenting and discovering things that you like. And in general everything is mostly based on one’s personal preferences and taste.
But I guess that’s what so fun about this.

Anyway – I just found a Mullard 6080 for 85€ on ebay and couldn’t resist. The little devil won again.

TO LIES AND TRUTH!!!

My point is that you can do some experimenting without breaking the bank. Or even 6AS7G’s, if they are cheaper/more available in your area.

further to what Shane said, you can even get adapters so tubes that wouldn’t work will.

word of advice… get some socket savers.

actually that was also something I wanted to ask … so it is possible to put on adapters for other tube sockets? But I guess i would still need to pay attention on the details like power delivery / consumption, right?

Yes, this is generally possible but not recommended.
Because the amplifier was not designed to drive other voltages/ampere.
This has become a trend in the forums.
It can also destroy the amplifier if you overdo it and that has happened before.

I would discuss this with Wieslaw beforehand, as you still have a warranty.
In my hybrid amplifier it would be possible to go to 6922 with an adapter and it regulates itself.
Not every amplifier has that.
My amplifier is not from Eufonika.

You can use socket savers with the usual pin assignment to save the socket in the amplifier, i.e. 8 pin to 8 pin without anything, but that’s okay.

Does anyone know how the H5 w/ Miflex stands up to the crack + speedball?