I remember that there are actually a few people here that are EQ experts! But i can{t remember exactly who atm lol. Either way, i use an elegia and love it but i eventually want a warm forgiving headphone to pair with it. because i listen to alot of kpop, and generally alot of modern music has a tough SSSSS region there r times i want to lay knowing that it bothers me lol. Much music like Monseir Periné and Orishas - Atrevido is totally fine with the S region because it’s recorded very well but alot of music like 키썸 - 심상치 않아 can be tough lol.

Basically, what regions do i EQ to remove that? And in particular i found the 58x to have one of my favorite sound signatures and most forgiving. Plz help whizzards!!!

Here is the frequency response graph for the Elegia with the HD 58X pasted in above for comparison: 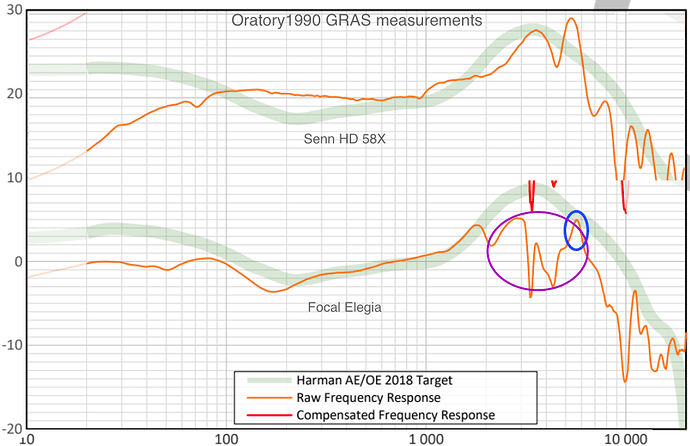 I’ve circled in blue the likely problem area causing the S/sibilance you’re hearing. The simplest thing would be to do a negative gain EQ of -4 dB or less at 5750 Hz. This is assuming your particular unit of the Elegia matches the one Oratory1990 measured. But the unit Head-Fi measured shows exactly the same peak location, so yours is also likely to be consistent.

Another approach would be to bring up the broader area between 2000 and 6000 Hz that I circled in purple to come closer to the elevation shown by the wide green line of the Harman target curve. This is because the 5750 Hz peak is not actually too high but instead the areas before and after it are dramatically too low.

But that suggests an obvious solution. Simply follow Oratory1990’s entire recipe for EQ’ing the Elegia to the Harman target at the bottom of this PDF:

The Harman target is designed to be a good compromise between warm/bassy, relaxed, and neutral/accurate. After you’ve input that you can raise or lower the bass shelf (his band 1) or the upper mids shelf (his band 5) to match your taste and hearing. If you want a simpler recipe to get very similar results, use this one.

Alternately, I could provide you with an EQ recipe to turn your Elegia’s frequency response into that of a 58X. If any of this stuff is unclear, just ask.

let me try to lower the gain at 5750hz then! because i DESPISE the harman curve lol. ill hit u up in a bit after testing some songs with rough SSSSs. thnx alot!

Alternately, I could provide you with an EQ recipe to turn your Elegia’s frequency response into that of a 58X

So first of all, here is a screenshot of my EQ atm 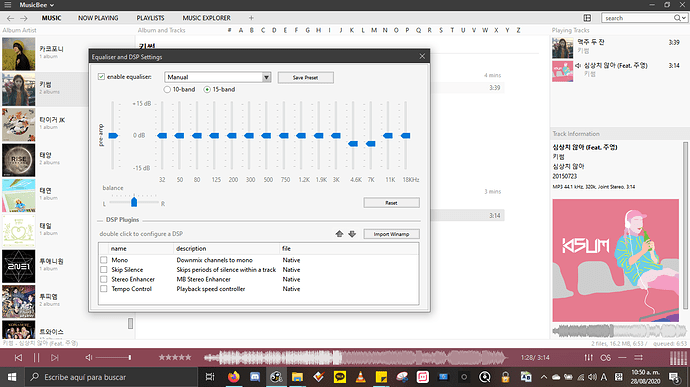 I had to lower the 4k and 5k region because my music player only uses a 15 band eq. This works surprisingly well! It lose a bit of clarity for the highs, but that’s to be expected when trying to smooth out this region. Thanks! i would however really really appreciate if you could indeed provide an eq to make it more like a 58x, mostly out of curiousity to be frank since i do this that the negative 4 decibel thing helped alot!

What music player is that? That’s a surprisingly useful selection of 15 bands. I assume you want the Elegia->58X EQ to use those bands?

BTW: if you haven’t already, try reducing how much you’ve lowered the 4.6 kHz slider to see if you can get by with less and reduce the effect the EQ has on the rest of the Elegia’s treble FR. Then try the same but with the 7 kHz slider.

What music player is that?

I assume you want the Elegia->58X EQ to use those bands?

Yessir! Altho it dosen’t really matter, i know that some people use a program with more bands that affects the entire system, i could download that too if u think it’s better. I will also use it with my phone if i like it.

BTW: if you haven’t already, try reducing how much you’ve lowered the 4.6 kHz slider to see if you can get by with less and reduce the effect the EQ has on the rest of the Elegia’s treble FR. Then try the same but with the 7 kHz slider.

Mkay, let me mess with that real quick!

Yeah ok sure just keep telling yourself that lol

Ah – thought by music player you meant DAP. I’ll have to pass on MusicBee since my listening computer is Mac.

EqualizerAPO with Peace GUI. Very powerful but sadly can only be used on Windows.

On reflection I’m going to pull a bait+switch (grin) and let you create the 58X simulation EQ yourself: 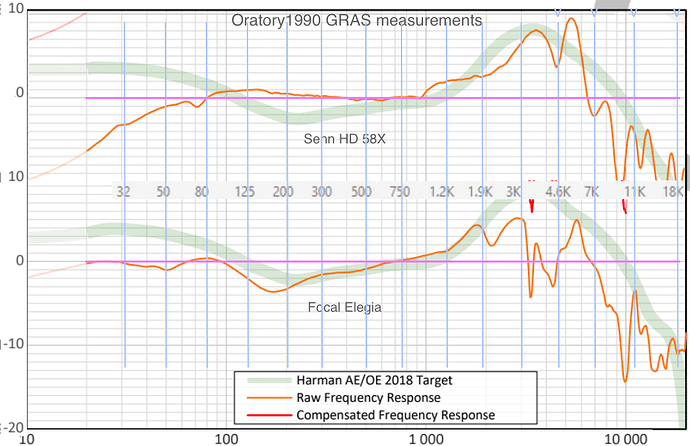 Musicbee makes it very simple. On the new graph I’ve added blue vertical lines to match each of your 15 bands, plus 2 purple horizontal lines to clarify the 0 dB centre line for each headphone. All we want to do is record the difference between the 58X and the Elegia at each band.

Once you do the same for the other bands post a screen shot of the resulting EQ in Musicbee if you want me to double check it. Also, you could cheat and leave out the -3 dB drop of the first band, since it would be a shame to cripple the Elegia that way.