Another budget IEM offering from Fiio. This time a “high-end” beryllium plated single dynamic, according to their site. I wonder how these stack up against the JadeAudio EA3 and FH1s (hybrid 1DD / 1BA). The FD1’s are going for $80.

Hmm interesting. They available for purchase? I don’t see an option to buy.

does beryllium make it a bio-dynamic?

No, biodynamic is a biocellulose material. Totall different from Beryllium.

I only found a few on sale on AE. I’m waiting for them to pop up on Amazon.

on the aside then, are there bio-dynamic IEM’s out there?

Looks like they go head to head with UrbanFun’s both being bery and the same price point that is.

Not too sure…IEM drivers aren’t my area of subject matter expertise…though I’d imagine there are biodyna IEM drivers.

Yes, you just have to look for them. They are slightly more common than the bery drivers in the sub 200$ price category.

I’ve had these on my Amazon List for quite a while, but never pulled the trigger. If they’re anything like their headphone counterparts, they may need quite a bit of burn-in.

So i picked up the Fiio FD1, I think it has a less offensive sound compared to the FH1s and sounds pretty damn good with foams. It has decent punch, but does lack some bass quantity that is hard to EQ up. Wide bore silicone tips help the bass, but give the treble a sharp edge that makes them more unpleasant so not without flaws, but better IMO than the other at 60$.

Have you tried Spinfit CP145 or Final E tips yet? usually help with bass and cool the treble a tad.

Sure, I’ll try the a tips, I just really like the foams LOL the reecho peacock foams have me spoiled lately, I’ll check it today

I returned my FD1 immediately. It’s a treble cannon. Horribly sibilant. I was heartbroken because the cable is beautiful and I’m a big fan of beryllium dynamic drivers and the Fiio fit. I love the FH7. 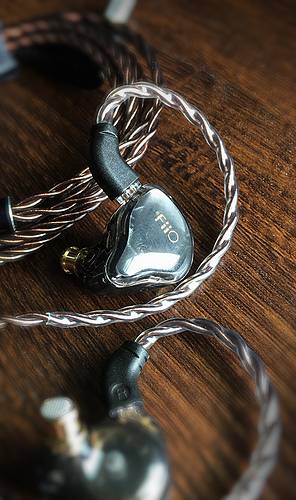 Ok, so they do get a little more bass with final tips, not a bad combo. I’m happy with them either way. They are harsh with stock tips outside of the foams they include. Just like the FH1s, but less so.

These look lovely. Now I’m torn on what to get, I’ve been eyeing the Moondrop Starfield for a while, but these seem pretty nice as well. Sadly the official retailer doesn’t have them in stock or listed. So it’s going to be an Amazon or Aliexpress run for me if I decide to get either.

Has anyone done any direct comparisons between the FD1 and Starfield, or have experience of both?

Has anyone done any direct comparisons between the FD1 and Starfield, or have experience of both?

I had both the Starfield and the FD1. The FD1 went back and I still have the Starfield. If you don’t want to spend the money, for 60 bucks, you can get the beryllium dynamic driver Urbanfun. I prefer it to the Starfield, but they have had quality control issues in the past.

Of all the IEMs I’ve purchased, the FD1 is the only one I returned. It is that bad.

I was looking at the Urbanfun for a while too but decided against them. I just wanted something “more” if that makes sense. Besides the Urbanfun are too similar to the BL-03 in shape and look. The BL-03 actually fit me perfectly, so it’s not a shape issue. But visually the Moondrops just speak more to me. I just hope they sound as pretty as they look.

I’m fairly sure I’ll dip into the Starfields at the end of next month, they look amazing and the reviews are making me want them even more.

I didn’t expect to hear anyone slam FiiO this hard on a pair of IEMs though. But maybe this set is just the odd one out of their lineup. I’ve had an interest in FiiO for quite some time, but never pulled the trigger because the ones I’ve wanted have always been a bit too expensive to justify (FH5, FH7). I might dip on the FD1 just for curiositys sake later, but for now it’s going to be the Starfields.

I’m fairly sure I’ll dip into the Starfields at the end of next month, they look amazing and the reviews are making me want them even more.

I hated IEMs until I heard the Starfield. It made me fall in love with them. It’s a fantastic IEM. It’s one of the best fitting IEMs I have.

I didn’t expect to hear anyone slam FiiO this hard on a pair of IEMs though.

Ha ha! Honestly not trying to be a bad guy, just trying to help others not make the same mistake I did. I’m not bashing Fiio. I have the FH7 and consider it one of, if not the most detailed IEMs I own. I also own a Fiio Q5s.

Here BGGAR compares a bunch of IEMs. You can hear what he thinks of the FD1… https://www.youtube.com/watch?v=Rhh_CSTtLXo