This is the official thread for the Eclipse I get his “fuck you, bass” argument, but he would so rate this a C+ if it came from someone else…

I get his “fuck you, bass” argument

IEMs aside, I laughed more than I should at the vid.

Opinions and tastes aside, I love Crin videos

let’s launch it at the price the FH5 usually goes to when on sale because it has a youtubers name on it lol
still curious what other reviewers will say about it
Edit:

IEMs aside, I laughed more than I should at the vid.

Maybe we should start a reviewers review thread in off topic?

That’s why he chose not to rate them

And idk, I’m pretty sure if the bass is as non-bloaty as he claims, I could see him rate it B

Crin’s a businessman, and if doing business means launching (and liking, as he says in his video) mid-tier IEMs… Well, there goes his ranking list’s credibility.

At this point, graphs are his only contribution to the scene that can be seriously appreciated. Rest of his game is just for funz.

Same can be true for other reviewers/salesmen as well, this is not exclusive to Crin but everyone who has a vested interest in pushing a product over others.

I don’t think that argument holds up when he doesn’t rank his own product.

He can’t, for example, review the Moondrop Aria 2 and rank it under his own so you’d buy his own… because he didn’t rank his own. Of course when in the review he says ‘but I think the FHE sound better’ or whatever, then THAT review is no longer valid.

It does not however

It can but does not need to:

It does however immediatly:

All these remarks you made are correct.

However, I don’t think the argument of not ranking his own sets due to “conflict of interest” is enough to justify his ranking list being valuable for purchasing decisions.

I mean, based on his preferences as those have been formulated over the years, would he ever rank a “f**k you bass” set as S or A+ tier? I’m really doubtful.

So, this is say a B or C+ tier set in his rankings (even if he never ranked it, but still he should be able to compare it to other products I guess). Still he loves it, as the man tuned it.

In this scenario, B/C+ tier sets are not “boring/average” enough not to be worth considering, the man might just have proudly tuned one.

Now the question is will the FH3 retune of the DD add a F ton of bass body and decay to the point where bass details are being obscured all for the sake of that heavy one note punch and how does it compare to the tri meteor.

I really do hope it gets tuned well but I’m couscously optimistic considering how crin tuned his prevous 2 colabs.

It’s an opinion based list. He’s always made that clear… So who cares

I don’t get how people are upset about this product affecting his credibility. Like you guys do know he already made a pair of IEM’s before right?

The Eclipse seem quite similar to the Thieaudio Clairvoyance. The difference is clear in the bass, more elevated on the Eclipse, but not that much. However I am not super expert reading graphs, just that difference in the bass will be so noticeable?

I have the Clairs, I like them, but they lack bass for electronic music. I am using EQ right now, and they sound much better for me when I pump up the bass and reduce the treble. (at this point I think that I should have bought the Monarch…)

I pre-ordered the Eclipse because I want a bassy IEM. If it was just for the graphs, I don’t think that I would push the trigger. I trust Crinacle, if he says they are bassy, I expect a fuck ton of bass…

mmm…will the bass bleed into other mid-bass and mid-range?

No expert on graphs, but that’s one of the main obsessions on any fine tuning, and I am sure they are taking care of that.

In any case, it does not differ too much from the Clairvoyances, and they are very very far to have the bass bleeding into the mids. In fact I would appreciate more bass to give music more body, even at the expense of less clean mids… 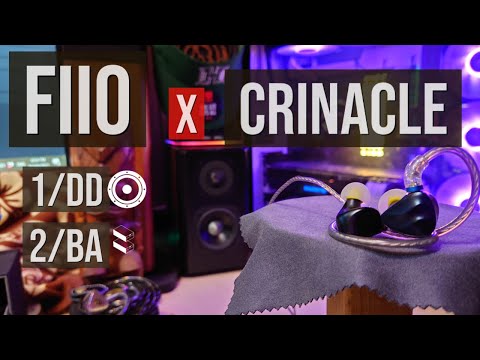 FiiO partnered with Crinacle for a re-tuned version of the popular FH3 triple-driver hybrid IEMs. The FiiO x Crinacle FHE:Eclipse is a bass-emphasized set with better in-ear resonance compensation, extended treble response, and the goal to be a fun,...