Hello everyone! I’m searching for my first pair of speakers for my desk. I know quite a bit about headphones but absolutely nothing about speakers, so I’m looking for some help.

My current setup is a Motu M2 sound card as a DAC (mainly used for my mic) in my Atom to my DT 1990s. I would prefer passive speakers and use my atom to power them if possible.

I would like to be able to use them when I’m not using my headphones when gaming and listening to music, but I would also like them to be able to work in my whole room since I have a couch further. I also want them black, aesthetics do matter, after all. I wouldn’t want to invest more than 700$ in this, but wouldn’t mind only spending 200$.

desktop speakers take more juice at different ohm’s then headphones do. you would also have to create, or have someone else make, an adapter to hook speakers up. and you could do all of this and drive certain speakers even. but the list is very small for efficient enough speakers to do so. and they are pricey.

that being said. you have lots of options available, both passive and active. active just means the amplifier is built in. many of them do not have dacs built in.

what genres of music do you listen to? are you happy with the atom/dt1990 combo? is there anything you would change or improve upon? helps us figure out what might be best for you.

I don’t believe the atom can drive passive speakers without a separate power amp - most headphone amps can’t. It should work just dandy as a preamp, however.

I would suggest you get a used stereo receiver to drive your speakers. Late 1980’s through mid 1990’s units can be had very inexpensively, and some of the better ones from Japanese manufacturers can really sound great. Pioneer, Kenwood, etc. stereo receivers have the power for a basic speaker setup, and can really sound fantastic.

If you want new passive speakers, in black, the Sony SScS5 comes quite highly recommended, and the aforementioned receiver should drive them beautifully. A stand alone powered sub would provide a lot of support and fullness, but shouldn’t be strictly necessary.

I wouldn’t mind getting an amp for speakers or directly going for active speakers. Whatever is the most versatile down the line. Eventually building a 5.1 setup could be a possibility.

I do love them, but I run Oratory’s EQ. I’ve been wanting to test them with other pads, but they’re so expensive in Canada.

I mostly listen to hip hop, rock and metal, some classic music too. But really, I lsten to anything.

While I have absolutely no problem going into the used market (I bought my 1990s used), I have absolutely no idea of what I’m looking for. Most of the things I see are HUUUge and wouldn’t quite fit a desk detup. They also have big AM/FM receivers lol. Could you link a couple models that I could use as a reference?

If I was to go new, what would be my options?

Also, is there a difference in sound of a speaker when you take of the grill? I prefer them uncovered visually.

if you plan on going 5.1 one day, or are potentially interested, then i would suggest a 5.1 receiver. as Dzaw stated, you can use the atom as a pre-amp. that allows you to put the reciever anywhere in your room and not on your desk.

the used market is a good point to look at as you get better value. you can get really good older models that dont have hdmi, for cheap.

10" subs can be had for 100-150$. model or brand doesnt really mater as they all mostly sound and perform the same at that price point.

if you want to avoide a sub, i would avoide the sony’s as they dont have much bass.

edit: grills add extra baffles for sound to reflect off of. removing them removes those reflections

edit: all of those have decent bass extension. the miccas and kefs having the most. there are chinese companies that are making clones now of popular designs that look quite promising. they skip middle men and inflated prices because of it.

I always say vanatoo t0 or iloud micro for desk, the ilouds do struggle if you plan of having them filling a room tho, for your budget you could even go with the T1 or t0 plus a cheap sub.

Yeah, stereo receivers are pretty big when compared to headphone gear - in the pic below, the stereo receiver is in the center of my desk, with the topper from a monitor stand between it and the base of the monitor to help ensure sufficient ventilation. To the right of the stereo is my dac, and my headphone amp is on the left side. The shelf is built so the bookshelf speakers have the center of the tweeters at ear level (speakers are on it “upside down” to keep this height alignment), and when I am in my chair with the keyboard drawer pulled out, the speakers are about 8” to 1’ further from each other than either of them are from me.

Subwoofer on the floor to the left, ox opposite that on the right, and battery powered UPS under the desk, next to PC 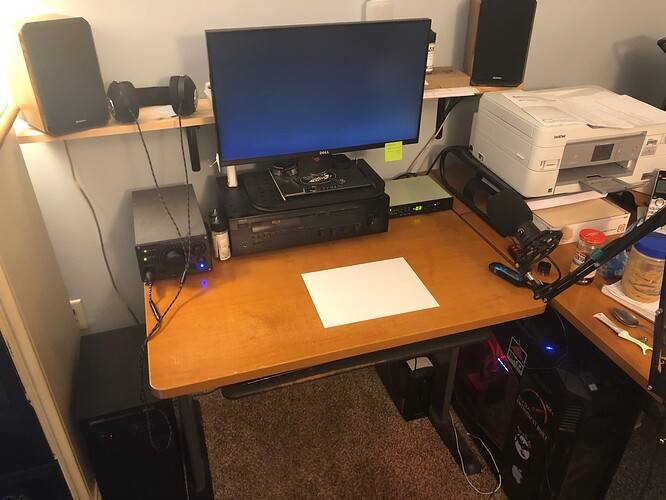 If your desk doesn’t have room for a big receiver like that, you could put it somewhere else - it’s fine living on a shelf or some such, you just need to plan your cable lengths and runs ahead of time.

As far as what to look for? The following listings should get you on the right track:

Unrelated but, really did enjoy my Soekris dac1541 and vio v281 combo when I had them.

Cheers my guy - I just need a headphone worthy of the combo, and I’m pretty much set for life! This is my endgame for sure, but I really want something nicer than the Elegia for my cans. These do for now while I recover after the expense of setting up so far

For the money they can’t be beat, & they’re an ideal size for desktop.