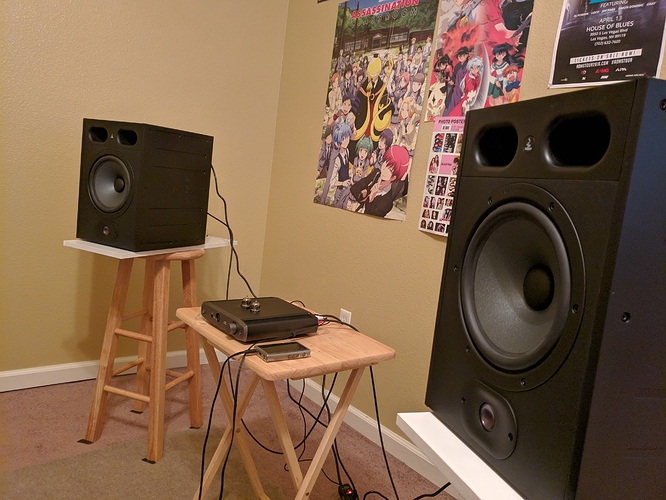 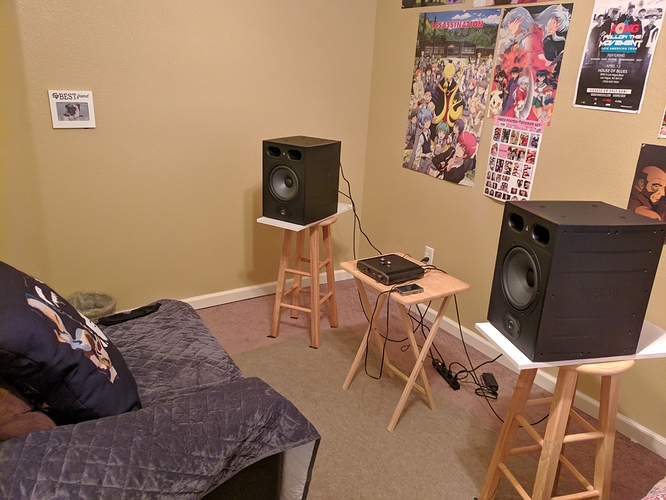 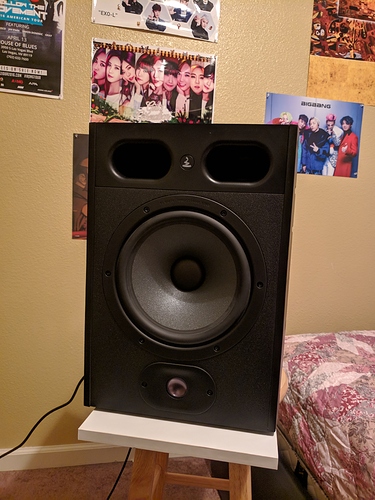 IMG_20201222_0848453024×4032 1.71 MB
I’ve had the focal alpha 80 for only 8 days or so so I’m just gonna put my impressions, specially since there has been a big learning curve for these Boyz. First of all these have the capabilities so far to be both a very fun oriented speaker set to also bring mid city with outstanding sweetness in the vocals only matched if not surpassed by the lcd 2 ime. The reason is that at the back of the speakers there are LF and HF shelf switches that can increase our lower the bass and treble allowing u to change the frequency as u wish and maximize fun and beauty. In the stock form these speakers sound very accurate in terms of how something was recorded not necessarily in terms of real life. The dynamics, speed, detail, sonical differences in speed between instruments is pretty spot on in what I would assume like the recording was meant to be. Warm when the recording is more warm, more thin and analytical when it was meant to be thinner etc. It just seems to be dead neutral. They may sound less fun than stuff like the Ilouds and Micca Rb42 but at the same time it doesn’t sound dry like the ilouds do and it doesn’t sound as buttered up as the Rb42 UNLESS the recording calls for it, like Stella Jang - Stella I and also Kim Suyoung etc and it definetly sounds thinner in recordings from artists like DJ Okawari. But here’s the kicker, low shelf at 0 and high shelf at -1 the vocals sweeten up a bit, and mostly due to the more recessed treble the the beautiful mids stand out, all of my favorite vocalists just SHINE with thick, lucious and sooooo sweet with rich bass standing behind everything. It’s just perfect. However when it comes to Kpop like Red Velvet, Chungha etc I really really adore sparkly fun treble with outstanding bass and so the other configuration I’ve been really really enjoying is low shelf +2 and high shelf +1 due to how phenomenal the mids already are in the speakers they still sound amazing thru much more forward treble and bass while still maintaining a super balanced fun sound with bass that rumbles and shakes the room and sparkly treble that is just so engaging. Again with both configurations in when playing with the shelves the sound becomes a bit more forward, the second configuration is most forward and most balanced while the first configuration is mids city with the best vocals.

Long story short, the timbre, tonality are outstanding and maintain the ability to sound oh so sweet and also depending on the recording can sound as digital as kanye west’s newer albums (like a gay fish). The speed is outstanding, impact is amazing, separation is pretty great, imaging is ridiculously good. The imaging is definetly the best imaging I’ve ever heard, pianos sound amazing, string instruments sound amazing. Honestly it’s just reminds me of the LCD 2 in the way that it just sounds real, as real as possible and does everything well.

I’ve played around with the lower end focal headphones including the Elegia and Elex, both are what brought me here as a Focal Shill and both also guided me to buying their two channel brother. If there’s something ive learned about Focal in terms of stand out things it would be their Impact, speed, dynamics and timbre really make up the beauty of the focal sound signature. But the Focal Alphas really are the most balanced and mature sound signature ive heard, unlike the Elegia and Elex. It’s weird to start this review out with comparisons but i really need to point out the differences within their own lineup because even if the difference itself is small there is a major impact that comes with those changes. First of all, the faults of the elex, too dynamic, engaging and mid forward that lead to a very fun but more specialist sound that dosen’t allow for relaxation and is something that i consider to sound slightly unrefined. The elegia has the more refined sound signature where the mids aren’t too forward in comparison to the elex, dynamics are more realistic and accurate to where it allows you to enjoy more relaxed music and properly play it however it loses whatever soul the elex managed to have. The upper mids sound so clean and sharp that it sounds fake, sounds too clean when listening to very organic music like 스텔라장 (Stella Jang) - Bourgeois Emotion it just wouldn’t let me get into it, it sounded fake. The Focal Alphas however ive owned now for 5 months or so, no honeymoon phase and no tricking me into sounding better when i first owned them and disliking them after a while (looking at you Elegia).

My first impressions were strange, because the Focal Alphas were unlike the younger siblings in terms of the speed and dynamics seeming just right. They didn’t seem exagerrated in any way, the speed on cymbals from stuff like 낯선아이 - 섬 (Oddchild - Island) seemed very appropriately fast and no excessive in the least bit. Dynamics too are something that i’m used to being very good, and the Focal Alphas as expected from the focal line of products have amazing dynamics that really stand out when listening to some of my favorite tracks like Cafe Tacuba - El espacio where it begins very slow and quiet instruments and builds up to an intense orchestra after my boi explains what the big bang felt like in first perspective. This song is one of the best i have for dynamic range, which is very befiting considering what the song is about lol the personification of such an explosive and dynamic even like the big bang. But again, not matter who i put, fun and punchy Orishas - 1999 witch sick bass and punch or music more focused on fun sparkly treble like 러블리즈 - 그 날의 너 (Lovelyz - That day) it just feels like it really changes the pace depending on the music so damn well. Never too punchy, never too fast and never too slow or soft. Saying so, this must sound like a boring description lol but it’s the beauty of these speakers. A word that kept on popping up when i thought about these speakers was the word “Classy” timeless even. It dosen’t have weird but fun tunings like the Nighthawks and LSA Hp2s do and it’s a bit more neutral than stuff like the sundara, ksc75 etc but it’s exactly because of that reason that i enjoy these so much. And in some ways would consider them to be perfect in what their purpose was, recreating the music as well as possible. Sounds cliche, specially since i’ve never heard most of the artists i listen to live and even less in the recording booths but after listening to so much gear you get an idea of what you consider to be neutral or accurate and the Focal alphas are the ones that have gotten closest.
Imaging is another stand out feature, besides the Tia Trio the alphas have the best imaging i’ve ever heard that help create an experience when listening to fun recorded stuff like Injury Reserve - S on ya chest (anyone else thought this had something to do with feces???) where you just hear vocals going in and out left and right in addition to simpler stuff like Iskander - Me puede la vida and you hear what sounds like water just going accross from left to right back to left throughout the song here and there. In particular in the beginning, just a nice little detail i noticed.
When it comes to the tuning, balanced dead neutral. GREAT subbass and has been one of my favs for bass as you just feel the shaking inside of the room lol, mids are sweet when needed and more cold when the song calls for it. I enjoy vocalists alot with these dudes unlike gear like the ilouds which kinda remove some of the human timbre from most singers. Treble was interesting to say the least, because it felt like it did not have treble at first. I was used to alot of treble, or at least some in the room because i came from the ilouds and those have fairly prominent treble but after getting used to the speakers i got accustomed to not needing that extra treble and now it feels just right. Never feels like anything is even overpowering anything else, not the bass not the mids and not the highs. Everything has a pretty even representation in the playback.

Very long story short because i’m getting sleepy, the Focal Alphas are still king of the hill for me and i would take them over anything else ive ever heard. Schiit Bifrost 2 is an amazing pairing with them since it really brought some of their punch out and gave the Focal Alphas the separation, space that they are capable of pulling off. They carry the soul of the singers, the intensity of the violinists the rumble of deep bass and treble for chimes of alot of kpop. They do everything just right, never feels excessive. Some people might think my descriptions of them sound boring and they probably do sound boring but the Focal Alphas are the classiest setup i’ve ever heard. Something that i only appreciate because i’ve been around the block listening to all kinds of gear and have developed the appreciation for a mature, refined sound signature that covers all of it’s bases. These are my favorite method of recreating music, over the LCD2pf, LSA Hp2 ultras, Tia Trios, Iloud Micros, Micca RB42s because these do it perfectly and do everything i like in gear to a very nice level. If the elex gives you a fun ride that you enjoy because it’s different and energetic the elex is a pricey whore but the Focal Alphas are marriage material. Someone with that something that you enjoy, find peace in and want to commit to because of an unexplainable love and sense of comfort.

Speakers, are something that’s irreplaceable to me and continue to be something that i thoroughly enjoy. The recreation of a stage inside the room, the physical vibrations going accross the air and the enjoyment of having the stage distanced from you singing to you. It’s something that when you give it proper space to exist it manages to recreate it insdie an actual room and comes to life imo. Headphones are something that i’ve been able to enjoy as much as speakers at times as long as im in the mood for them, but the two channel format is too alive to where i end up coming back to it all the time haha. 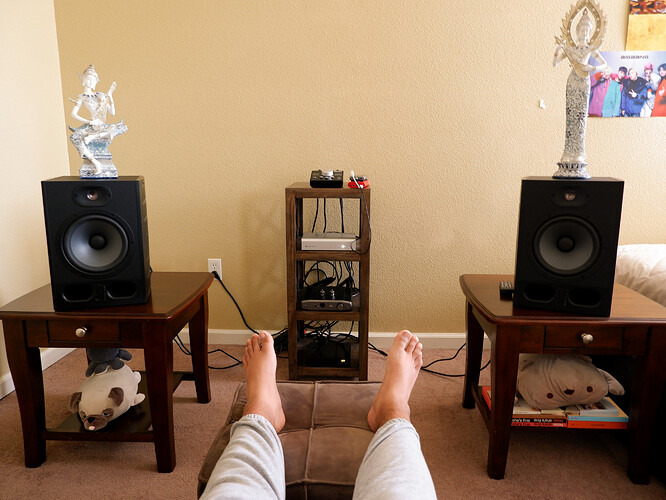 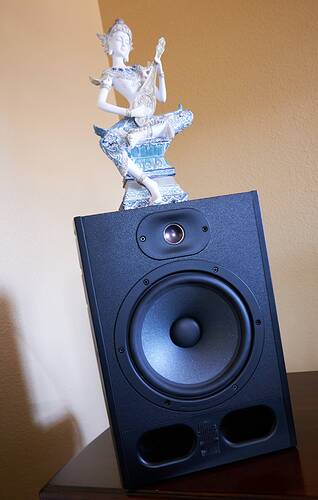 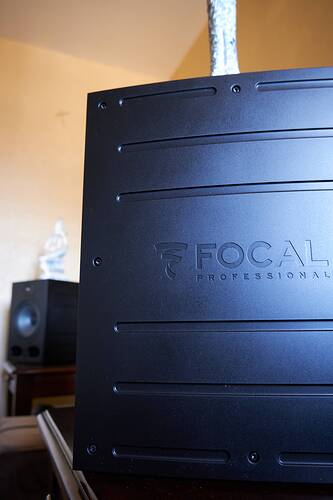 VllCfWJ4000×6000 1.54 MB
Yes, that’s black tape between the bass ports. Because they have the most annoying light, suuuuper bright shit.
4 Likes