New here BTW. I’m looking for headphones specifically for competitive games such as Rainbow Six Siege and CSGO. I currently have an M40x with HM5 angled pads. I got an Atom dac/amp stack. pls help me spend my money wisely.

Most of the time they recommend the Beyerdynamic Headphones for gaming here. The DT880’s 600ohm are pretty goodi hear.

I would suggest checking some of the other topics on the forums first. There have been some excellent responses already and quite lengthy. From there, ask questions as you have them.

I think you are pretty much fine with the M40x unless you’re dissatisfied with it’s imaging.

First off welcome to Hifiguides,

Completely disagree on the being fine with the m40x comment for competitive gaming I don’t find them ideal at all. What budget are you looking at here? Do you own a modmic or a seperate mic with your setup already? I also can’t recommend the dt 880s, least not yet, the reason being is I would ask first if you are sensitive to treble at all? Is this strictly for competitive gaming or do you intend to use it for other sources such as music or casual gaming I know you mentioned this is specifically for fps games but most people I know prefer to do a bit of a mixed bag so to speak.

my max budget is $300, I already have a separate usb mic, im not that sensitive to treble, and yes im mostly gonna game on it.

Alright, so in the case of FPS, depending on just how serious you are, you will want a headphone that doesn’t have a lot of bass or rumble to it. The reason behind this is that bass and rumble get in the way of fps cue cards such as footsteps, breathing, etc meanwhile the brightness livens up the ingame sounds allowing you to easily pin point them. You generally want a headphone with neutral or recessed bass with mids and highs being forward and highs being raised since it helps alongside a larger and accurate soundstage and imaging.

As already suggested one of the headphones in this category is the Beyerdynamic DT 880. The dt 880 has less bass but it lacks body which may sound off to some however it has a large soundstage is semi open back and is a very great all rounder. The 600 ohm sounds the best but tends to be relatively picky. Pick up either a 250 ohm or 600 ohm while the 250 ohm would probably sound better on your current setup if you plan to upgrade to a stronger amp in the future of the $200+ range buying the 600 ohm may be the best investment here. You can swap these to the DT 770s if you feel you need a closed back of course however these will definitely come with more bass as is natural with a closed back it can be equalized down though which is fine.

Another suggestion would be the AKG K702. This headphone again has less bass but more soundstage. It’s a little bit innaccurate but is superb in fps. In this list, the k702 is known for it’s fantastic sound inside of competitive gaming. mids and highs are forward with highs being slightly raised and not bassy alongside an analytical sound and good seperation. This headphone is incredibly nice to have but not for everyone due to just how analytical it is and the bass is definitely not very present. Needless to say this is considered one of the best for competitive fps in a top 5 list. I would rate the DT 880 over this due to sounding a bit better and being more accurate as this headphone suffers inaccurate sound placements due to just how large it’s soundstage is. Despite this the headphone is second to none in competitive fps. I don’t have a closed back recommendation here honestly k702 is too damn good in comparison

Audio-Technica AD-00x series: This gets a bit hazy as a recommendation. One of the things I noticed for audio technica is quite a few of their headphones have a recessed bass. In the case the ad700x this is a super budget friendly headphone and one of the budget gods of the competitive gaming world. The reason being is that this has the most recessed bass large soundstage mids and highs forward and raised. The drawback? It feels cheap, the headband leaves much to be desired, suffers from seperation in sound issues. AD900x addressed some issues here as the next in the lineup however it wasn’t until the AD1000x that this headphone became good as while it still has it’s build quality issues and headband issue all the sound issues were fixed and has proper seperation and is even brighter making it one hell of a good gaming headphone. A closed back alternative here would be AD1000z and its previous variations

Sennheiser Lineup: Alright so this is more for a balanced setup but I can’t just ignore the Sennheisers they are too good at practically everything. HD 598/599 though discontinued are reveered in the gamer genre for their balanced yet wide soundstage nothing really stands out too much in the sound they are a perfect balance. The next step up sound wise is the ever popular 58x Jubilee from massdrop this sorted out some issues people had with detail and compression and the like in the sound but at a small cost to soundstage. These headphones are immensely great for just an all-round use as they have a very close to balanced neutral frequency. While the m40x has more bass and raised treble V signatures due to their bass aren’t as good. This would be a step in an all rounder good direction for a much more balanced setup. No closed back recommendations to speak of.

Phillips SHP9500. Bright and not as bassy alongside a wide soundstage this is a very comfortable budget friendly option and known well amongst gamers. It’s budget friendly to the point of like $80 but absolutely fantastic for competitives. If you feel this headphone has just a touch too much bass you can equalize it down a couple points in a program called Peace Apo(its free but requires two small downloads and some configuration by downloading the driver to your current dac or onboard). Personally, I love this due to just how budget friendly it is and how great it is inside competitives. No closed back alternatives to speak of.

The headphones here are probably your best bet in that budget for competitive gaming. @Antpage2 provided one of the more extensive guides already. Here is zeos’s recommendations as well https://www.reddit.com/r/Zeos/comments/97mi5s/zguides_headphones/ bit dated but still fairly relevant. Personally, I don’t like closed back headphones for gaming in general especially FPS this is because open backs give you a more 360 degree of vision with their sound as it sounds more open instead of the sound being focused to the center of your head, despite the norm being closed backs for competitives which is primarily for the isolation open backs in gaming easily overtake closed due to the open sound unless in special cases for headphones as some closed backs sound really wide despite being closed

Damn dawg I did not expect this response. Thank you for your answer boss man, I think that I will settle for the DT880 250 ohm because I dont really plan on changing my amp/ dac but if I do it will prolly be later on. thank you very much. If you think there is something better than the dt880 250 0hm pls reply.

If it’s solely for the competitive play. That or the k702 would be my recommendation. If you wanted more bass dt 770 dt 990 for beyers and k712 or k7xx for akg. Other than that your fine. I think you will find the dt 880 fairly exceptional for competitive FPS as there really isn’t much better. At that point, it will boil on whether you actually like the sound. Try to make sure you have a return policy if you don’t like the 880s in which just switch over the k702 as the primary reason I find people don’t like the 880s is lack of body or too bright(treble sensitivity is a real thing and can cause quite a bit of pain and discomfort)

as you can see dt 880 special edition black, the red line, has more of V signature to it as it has more bass meanwhile the alternative does not. 880 black special edition sounds more like a dt 990 than it does the 880s original. Go with the regular dt 880 edition as that added bass and rumble will definitely get in the way. 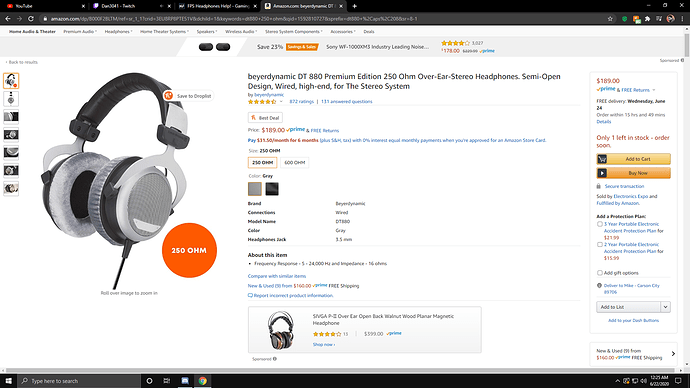 Yes, that is the correct headphone your looking for.

Just a headsup though if you order them. The headclamp may be a bit much out of the box and in some cases can be skull crushing(my first dt 880 was like this). You can fix this but placing the headphone on it’s box to kind of stretch and break in the band and let it sit for a day or so. If you have a larger head though try to make sure you have a box that is closed to the width of your head and use that. Doing this will also soften the pads more as they also need broken in they are rather stiff at first.

Feel free to chime back in on here and let me know your thoughts and if something can be improved or if you just enjoy the headphone. Glad I could help and I think you will find a lot of enjoyment out of the headphone. Happy Gaming!