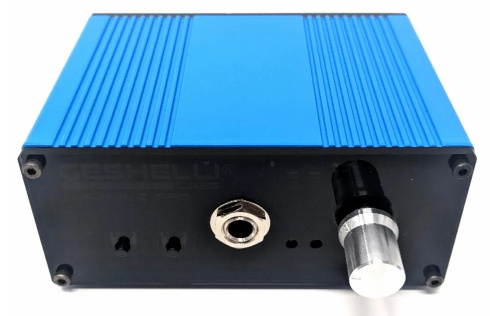 what exactly are the differences between this and the 2 Pro?

Another company I reached out to recently to begin more formally reviewing audio gear was Geshelli Labs, and they also agreed! A big thank you to Geshelli for this opportunity. The first piece I received from them is their Archel 2 GMR headphone amplifier. Geshelli has asked nothing in return so the opinions you’re about to read are my own.

ABOUT THE GMR & BUILD

The GMR is a refreshed Archel 2 and sells for 149.99USD directly from Geshelli’s website. When speaking with Geshelli they mentioned that the Archel 2 had been the measurement champion until Topping tied their work. The GMR was designed to get back to the top of the measurement game and also add a bit more power. Geshelli’s website claims the GMR has less than 0.000095% THD+N at a 2V RMS output. To put that in context, that’s very little distortion*. The same website also claims a >120dB SINAD, > 125dB SNR, and 1 watt per channel output at 16 ohms. Other notable features are an ALPS RK163 potentiometer, 2 gain stages with a 6dB difference, 2 inputs (standard stereo unbalanced RCA and a 3.5mm minijack), and internal LED lighting that can be off or one of several different colors. Personally, I didn’t think those lighting options were all that necessary at first. But, after using gear in a dark room I did see its advantages. Look at this picture: 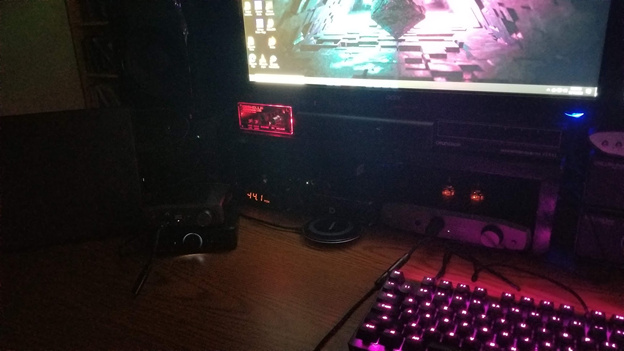 That’s a low-light photo in a pretty dark room. The internal lighting of the Geshelli not only looks cool through the clear front faceplate, it’s useful in a dark room as I found myself not fumbling around blindly for the volume knob. And if you don’t like the light, you can turn it off. Both are nice features, in my opinion.

Physically the GMR is a well-built unit. It has an aluminum shell with clear plastic faceplates on the front and back. There are different options for case color and faceplate style, too. My review unit was a royal blue case with clear faceplates. The potentiometer feels good with nice resistance and all the connections are snug without being tight. Add it all up and it’s a well-made unit that retains a very ‘a-hobbyist-made-this-in-their-garage’ kind of aesthetic. I like that aesthetic, but it may not be for everyone.

“Neutral” really is the term that comes to mind here. Listening to just the GMR for awhile it seemed that there really was not a perceived emphasis on any particular frequency range. After comparing it to a couple other amps (more on this later) I did start detecting the slightest hint of a very gentle ‘v’ to the sound, but it bears repeating that that impression came out only after directly comparing to similar amps. The bass is well extended and controlled; it gets appropriately punchy when the material calls for it. I was listening carefully to the low end early on because the rated power is not particularly high. Even when driving a 600 ohm Beyerdynamic DT880 while feeding it with an iFi’s Zen DAC (review here) with TrueBass enabled, I did not detect any bass distortion or pick up any signs that power was an issue at reasonably loud levels (I tend to average around 75dB for critical listening). That told me that the power the GMR does have gets delivered to the drivers pretty well. Mid-range was detailed and refined with fairly natural timbre. The treble was sparkly and detailed without being harsh or shrill. In fact, the DT880, which is often quite sharp with these op-amp based amplifiers in my experience, was arguably less sibilant than with many other similar amps. The soundstage is neither noticeably wide nor small and there’s reasonably good imaging and separation between sonic images. The overall sonic presentation is also very clean and clear and with dynamics that lean toward lively. There were at times some high-frequency noise that was higher than on some other similar amps, but I didn’t find this particularly objectionable and took it more as a sign of good high-frequency detail retrieval. Overall, I found the sonic presentation to be quite enjoyable. The truth is I didn’t find anything particularly lacking and everything sounded pretty good for a $150 amp.

My current headphone collection includes large open-back planar magnetic headphones (HiFiMan Edition X V2, Audeze LCD-2 prefazor revision 1), a biodynamic-driver headphone (Massdrop + Fostex TH-X00 with Lawton Bolivian Purpleheart chambers), a low-impedance dynamic driver closed-back (Focal Elegia), and high-impedance dynamic driver headphones (DT-880 600 ohm, Massdrop + Sennheiser HD6XX – 300 ohm). I did not detect that the GMR had a strong preference for headphone type. It seemed to pretty much be itself with all these headphones and did a good job of letting the headphones be themselves. Even with the big planars, I didn’t detect any power issues from being current limited that would be reasonable to expect in this price range. This tells me the GMR is a fine base to explore the world of headphones with, particularly headphones under $500. The one exception to that might be anything based on a Fostex RP driver (T?0RP, Dekoni Blue, Modhouse Argons, etc.) as the power demand for that driver is high. However, as the Zen Dac w/ bass boost and the DT880 test mentioned earlier indicates, that could still work out ok as the GMR seems to deliver what power it does have efficiently and effectively. So, I have to disappoint any reader who is looking for a specific headphone pairing recommendation. In my collection at least I didn’t find a magic combo, but I also didn’t find any notable bad matches either.

COMPARISON WITH OTHER HEADPHONE AMPS

I’m not going to spill too much ink on comparisons in this review. That’s because I had an exciting opportunity to have the GMR, Topping L30, Monolith Liquid Spark amp, JDS Labs Atom amp, Schiit Magnius and Asgard 3, and iFi Zen CAN in-house all at the same time. I’m working on a big face-off of budget amps for that group that will hopefully be out very soon. For now, please accept a very general statement that the GMR acquits itself well in that group, it’s not the best of the bunch, and it’s far from last place. Its price is the median of that group and to my ear that’s where its overall performance falls as well, with a couple of sound characteristics, namely timbre and detail retrieval, that are competitive with some of the slightly pricier models. However, Geshelli will be pleased to learn that in my listening, I found the GMR to be a stronger overall performer than the Topping L30, which is arguably the most direct competition for the GMR right now based on pricing and measurements.

I like the Geshelli Labs Archel 2 GMR. It’s a fine little amp. It delivers on measurements and has pretty good sound for its asking price. I also like the made-in-a-garage aesthetic that gives it a charm that is quite unique in its class. I do my best to inform readers of the flaws of any device but there really aren’t any big ones with the GMR. The amount of high frequency noise might appear to some as a problem but I really think that noise has more to do with the GMR showing what’s in the recording. Are there amps that do that better? Yes. Those amps are also more expensive. The GMR not particularly powerful by specification but I also never ran into a situation where I thought its sound suffered as a result. I wish I had a Fostex RP driver headphone on hand to give that a more definitive test, but is the only reservation I still have about its power output for headphones that make sense to pair it with. So, if you’re new-ish to the headphone world and want to explore under $500 headphones, the Archel 2 GMR is a solid base from which to do so.

Thanks for reading and enjoy the music, everyone.

*I know that’s not a helpful contextual statement. The point is that THD number is about 3 orders of magnitude below the level you even need to start being concerned about.

EDIT: After posting this review a rep from Geshelli Labs said that they designed the GMR “around [T50RP]” - which means odds are good the GMR will power the Fostex RP headphones just fine. I can’t confirm that with my ears yet but want all of you readers to have the best info possible. Cheers!

Very nice review, I enjoyed reading that. Especially so as I contemplate picking up one of their SE amps, but I’m not yet sure which one.

Really nice review, congrats! I’m considering getting a GMR for a living room setup next year, the simplicity of all attracts me. This and that I want to hook it to vinyl.

if you have a DAC with balanced output, get the Archel 2, as it has balanced in and a very very good SE output.

Although my taste is not in favour of Asgard 3.

I also have an Argon MK II, I can put them on the GMR and see how it goes, will report back

But 2.5 Pro only has 6.35mm output, not that in matters, for those who want an XLR output Erish is the one I think