Hart audio (shipping fees) - for people outside the US SUCKS

dunno I can’t speak to the economics of the audio cable business and associated margins… I just know that for the business I support just for domestic charges our rates are up 125% YoY and we’re not even in holiday season. We got covid surcharges starting in May then in Oct-Dec you get peak season surcharges. UPS/Fedex have colluded to extend Covid + Peak Season into 2021 even though their volume load has dropped quite a bit. If you live in a rural area or the package is a non standard weight or dimension then good night. This is all domestic shipping I can only imagine the shenanigans that are happening with international small parcel.

That’s the thing, first time i got hit by UPS (when ordering from Hart Audio), was in Jan 12th, before COVID so i know those charges arent related to COVID.

Anyway at the end of the day i think Hart Audio are doing a great job and i hope they do great, im just really annoyed that because i live outside the US i have to pay and extra 35$ of BS fees (which i have already paid twice) for a shipment of cables

May I propose a title change?
Something like: “Unexpected fees on International Shipping”

Agreed. It’s not Hart Audio’s fault, he’d get hit with the same fees otherwise… the OG title implies that Hart Audio is guilty

Might also propose it be moved to the rants thread.

USPS’ First class international - Which is cheaper but “the customer would have to accept the risk in the event that usps loses the package in transit”, basically if the shipment gets lost, you are f*cked…

They could use " Electronic USPS Delivery Confirmation International or First-Class Package International Service"?
Tracking code is the thing.

Corpse Cable automatically had a tracking code for international shipping.
Full tracing from USPS to UPS to local post system. Corpse Cable manufactures exclusive headphone replacement cables for all the top audiophile headphone brands along with sweet adapters and interconnects ready to handle all your headphone audio cable needs. Go ahead and try us – you’ll find our build...

Wow lots of comments here. Really appreciate the interest from everyone. I’ve been absent on the forum as we’ve been absolutely slammed here since Christmas.

We hate the international fees just as much as you guys. As far as our understanding of the law is, outside of committing tax fraud, this is the way it works unfortunately since we don’t have fulfillment centers in other countries. We try to be as clear as we can on the site about it in terms of encouraging international customers to understand their tax liabilities before ordering.

Frankly, I don’t know why other companies seem to be able to get around these fees, other than the tax fraud remark above or pricing them into their product, which is something we can’t do as that’d be unfair to our US customer base.

Regarding the bit about: “if shipping usps first class itnernational, you accept the risk in the event the package is lost”… Once covid hit, USPS first class international became extremely slow, and unreliable. With that service, once the package leaves our hands, we are in the same boat as the customer in terms of there being nothing we can do to make sure the package gets to you, or to have good tracking (have to choose a more expensive service for that). So when Covid hit and packages on first class international started taking months to get somewhere, or get lost, we lost a lot of money rebuilding orders and shipping them out with UPS or priority international. It’s not a sustainable thing to keep doing that on our end, so hopefully that explains why we have that disclaimer for that service.

If any international customers use a forwarding service, we are happy to accommodate that if they email us before or after their order is placed. Those seem to be the most cost effective options for both parties.

Alright, it’s very late here, and I need to go home. I hope the poorly formatted words above made some sense. Thanks guys. I’ll hopefully get to spend more time on the forum soon too <3.

Ali Express definitely commits customs fraud, I just got a $30 iem cable declared as $4. I honestly wish they wouldn’t, it just puts my package at risk (not likely for a cable, but otherwise). 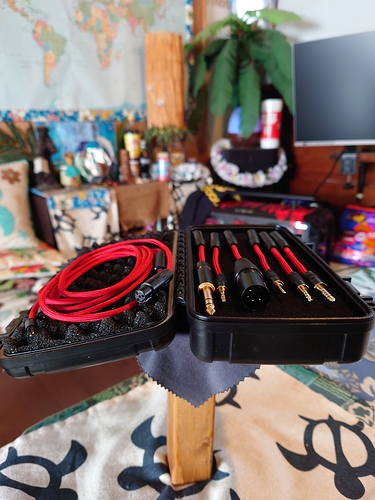 Mine were shipped to Japan. Nothing out of ordinary with shipping to Japan

Like I said initially and in further down the line, USPS losing package and that not being acceptable to you as a business owner is totally understandable but feel that might be some sort of middle ground that allows you both make sure that shipments don’t get lost and international customers not get totally screwed over, which is I raised the issue in the first place, while still stating clearly that I really like your product (Hell i bought almost every cable and every adapter from your shop)

I as an international customer have grown used to paying expensive shipping fees ( 30+$ for 500 grams is more like buying from a dealer than a shipping company) and taxes for items, what I’m not ok with is an additional charger magically appearing…

And these additional fees are NOT TAXES, they are fees that are separate, when you get an invoice from UPS there are 2 different invoices, one for taxes, as government documentation, everything is fine and dandy.

The 2nd, however, is UPS where it inserts its own additional fees that are somehow not included in the initial payment.
and you know how I know it does not tax? because you pay taxes for this transaction, after looking into the matter previously (way before COVID), these are additional “handling fees”, that somehow are not included in the shipment payment

While I know no one will probably understand this since its in Hebrew, this is the 1st invoice - the seal at the top is of the Israeli tax authorities, the red at the bottom is the costs of taxes in local currency 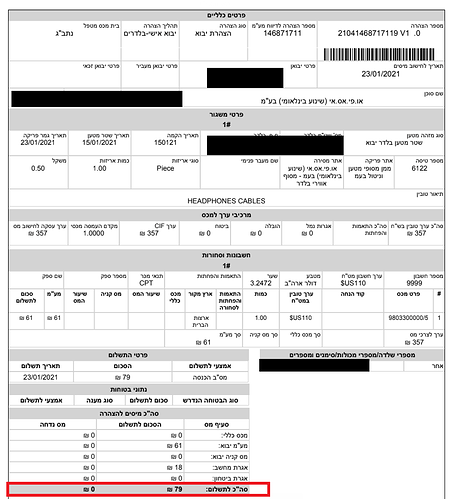 This is the 2nd Invoice - the red square is the taxes bracket, the green is UPS’s additional charges (which i pay 17% additional tax for) 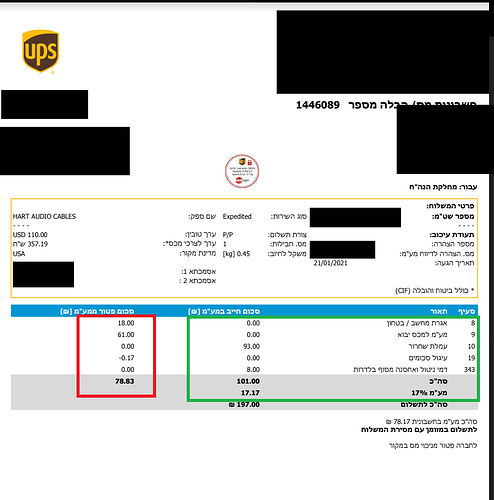 The only answers I got when I looked into the matter and my own conclusion of the matter is that these charges only appear in expedited shipping handling, which is why I said there has to some sort of middle ground while still paying taxes and keeping everything on the up-and-up, allowing costumers to not get shafted by shipping companies (like @voja said that he avoids these services due to outrages fees)

to avoid any confusion the very first thing I said was “To be clear im not bashing Hart audio, they make a great product IMO”, while the addition of the “shipping fees” that were added by mods is a good one that I should have made clear. I made clear that my problem was with the shipping service they used, not the company itself.

For imports to the EU (I imagine it is similar in other countries), you are looking at this here:

This may be their cost, and since only the shipper is insured, they could possibly declare their cost to get around higher taxes/fees. Not sure that’s how it is intended to work, though…just a theory.

The Chinese companies always under report the value. That way the sales tax is not collected. I think the golden rule is $100.00 and above for collecting the 15% taxes (here in Canada). Below that the paperwork is probably not worth doing.

You save on the purchase price with the Chinese stuff, but if you need servicing, that will be more difficult.

the 49th parallel is a bitch / bugger to those north of it.

USPS is the only affordable way to ship to Canada if you don’t have volume to use one of the big three and a brokerage service. it takes longer, especially now with COVID-19, but anything can be insured, just at the customers cost. Hart needs to find out what the insurance threshold is and then what percentage is charged once that threshold is reached and what the tiers are for the next level. with Canada Post, the threshold is $100 CAD after which you pay approximately 2% of the declared value, rounding up to the next tier if needed. my memory fails to recall if the tiers go by $50 increments or $100 increments though. additional fees are added when you go with insurance though, as then you need a tracking # and signature, so that tacks on another $2.00 to $4.00 there.

Thank brux for the response!

He mentioned “Priority international”, which from my experience is not much different (if at all) from first class international in terms of cost. Priority has tracking during all the trip, and I believe it has some insurance, although I don’t know if cover the full value.

I f*[email protected] hate this fees UPS and DHL charges, mainly because they are very hard to find specification on it; and their value is not presented at any part of the tracking, just in the delivery. It really feels like a “surprise fee” and it’s value should be clear from the moment you contract them. It’s a misleading tactic at best.

Also, on the subject of chinese goods, at least in Brazil they have a kind of “bilateral agreement” for small parcels, so that’s why they are the only import it isn’t taxed. Don’t know the limits in this agreement, but I’ve payed for a $40 package from the US and a (declared) $200 IEM wasn’t taxed.

Definitely avoid Corpse Cable - they are a disaster to deal with within the U.S. (can’t even imagine international) and are deceptive, not to mention that their products are overpriced for the quality and ship in a plastic bag. Avoid the marketing gimmicks and stick with more known companies.

Care to elaborate what happened with them?

I don’t want rag on them too much but the short story is they said a cable would work for my setup, I received it and it didn’t and asked to exchange or return. They aggressively told me that I couldn’t return the item since it was on sale (their policy is anything on sale is 100% no returns, amongst other vague archaic rules hidden in fine print).

The communication was rude and included them basically telling me I was an idiot (in bold underlined caps). Outside of that, I was not impressed with the cable - stiff, kinda looks and feels like a cheap stock cable. I just threw it out.

I’m sorry to hear that. Asking customers to respect certain policy is one thing but being rude is another. Thanks for sharing your experiences. Not exactly high end, but I’ve had good experiences with Cosmic Cables, CustomCans and Oidio in the UK. They are all very soft and customer service is very good.