Goodmorning everyone!
I would like to buy headphones and a dac / amp (if needed) for a total budget of € 300, maximum € 350.
I would use them mainly for playing games and listening to music.
Both open and closed back are fine, as long as they are comfortable, especially with glasses.
I tried the DT 990s and found them pretty comfortable, but buying them it remains a budget of 200€, that is the twice that i would spend on headphones, that seems to me a little bit too overkill, so something comfortable as them, but better (?)
I would buy from Amazon.it
Thanks to everyone!

Quite opinionated huh… To each their own but rather subjective remark here. My first beyer right there… not for everyone, but I wouldn’t say they are terrible… there are many headphones out there that are far worse

Why are they terrible?

They aren’t… they just fit with a set of preferences and lean extremely bright. Then again, I would encourage shopping around… amazon isn’t particularly the best of choices… not since you can third party beyers and find them in practically whats mint / like new condition for around $100…

DT 990 is the sharp V signature of the three… its definitely not for everyone but there are many, myself included, who appreciate it.

(Would it be enough for a planar magnetic?)

most cases, you’ll want an amp… helps with distortion, sound quality, etc. Other cases, depends on whats driving the headphones such as if its a weaker sided motherboard or something

Really depends on the kind of signature your looking for, types of games, genres of music… that sort of thing… As recommend 6xx up there… thats more neutral leaning so it performs well in many areas… but to some people it can seem rather bland and boring(people like bassheads and what not). “neutral” isn’t everything… despite some more common conceptions in the hobby.

He is mentioning the prices in Euro, a 6XX is not so easy to get in Europe or you pay a lot for shipping and VAT.
by the way…

Hm for what kind of music would you want your HP?
What version of the dt 990 do you have ( how many ohms ) and what do you like about it and what would you change about them ?
The more info we have the better we can help you

bass is fixed on those headphones by EQ or things like tubes, yep extremely intimate soundstage… not for everyones preference, well… not all of them have the 3 blob imaging… only some of them… I wouldnt say like the 660 has that issue as an example as that one is pretty damn solid in imaging… absolutely agreed on the aftermarket pads though…

The more info we have the better we can help you

Why are they terrible?

Quite opinionated huh… To each their own but rather subjective remark here. My first beyer right there… not for everyone, but I wouldn’t say they are terrible… there are many headphones out there that are far worse

Apologies for my extremely late reply on this.

The answer is simple its auitory masking is insanely high. The successive scoops at 4k and 6 k followed by a peak at 10k means you’re going to be plagued with being unable to hear those frequencies with absolute certainty infront and behind its a disaster.

Not only that but extremely painful this peak is huge and 10k peaks sound like you’re being stabbed. The distortion is also terrible in the mid bass and adds to muffling and issues with explosions, hearing foot steps, or if during music a kick drum or light percussion is played ruining clarity and midrange infront of it [See below] 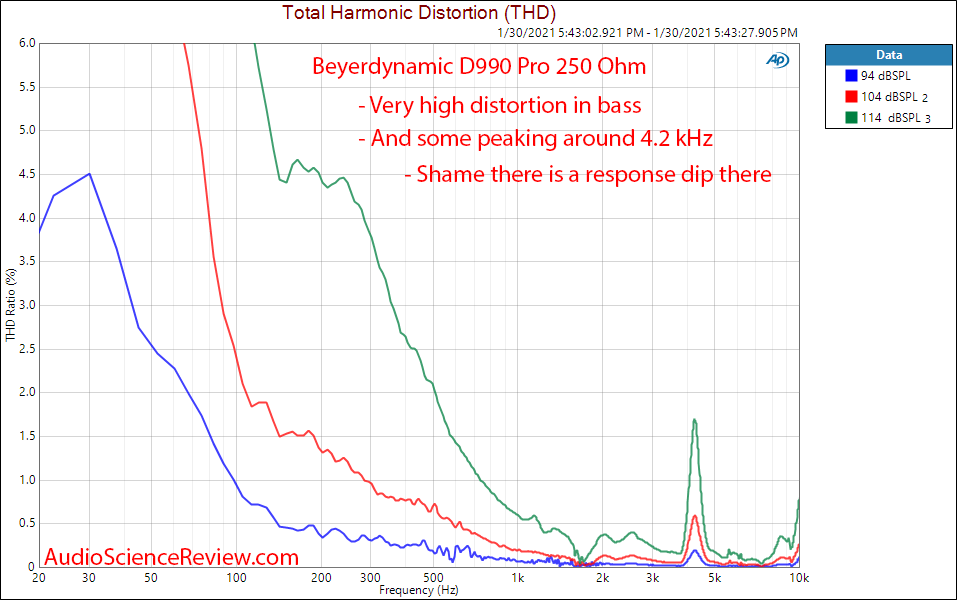 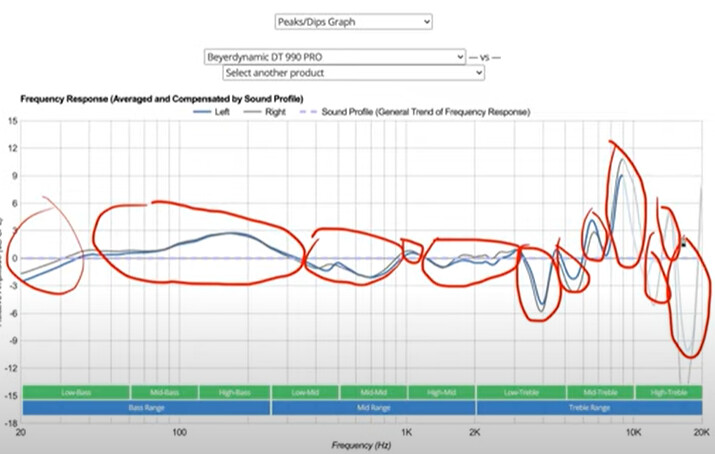 This image above demonstrates everytime theres masking going on.

Masking isn’t just that you can’t hear something well or muffled. If that part of the frequency response is played then frequencies behind and infront are reduced to either being very hard to hear or will be unheard. [See below] 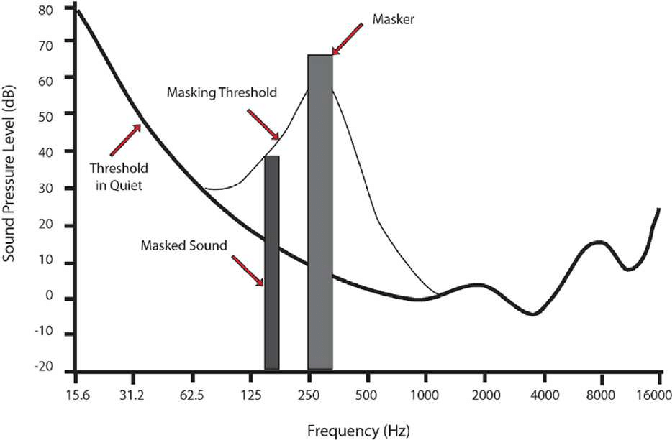 In summary there is no reason to purchase a DT 990 at all when the DT 880 32 ohm exists or even the 250 ohm. The response is significantly balanced for barely any masking in comparision to the DT 990 offering up way more detail and clarity during busy passages or hectic music or gaming. [600ohm is a different story]

You can salvage a DT 990 250 ohm with this EQ but man… look how much those peaks are being pulled down by… -10db at a time almost. Its a mess and the clarity and distortion saves this headphone.

HD6X0 line is terrible.
No bass, no highs

I couldn’t imagine being this delusional.

It has sub bass roll off. It isn’t gone. Plus has some of the most pleasant mid bass bloom out there.

It does have high’s it’s just a slightly darkened headphone but adheres to realistic timbre better than almost any headphone and certainly planars.

If you want a brighter experience tubes can be had to lift up that treble and air.

I couldn’t imagine being this delusional

I mean, rude? Im sorry but i agree with his statement… the bass on sennheisers are usually lacking same with the highs they are usually quite the neutral headphones… a persons preferences do not make them delusional. Please refrain from insulting others

has sub bass roll off. It isn’t gone. Plus has some of the most pleasant mid bass bloom out there

Have had zero issue of this outside of needing to eq the bass. Granted it has issues ill admit.

imo timbre is the ONLY thing the 6X0 line has going for it. i straight up hate the 600, 650, and 6XX. if you EQ that veil away they’re ok at best, to me at least, but i’m not one to get distracted by tuning enough to let all of the flaws go. no soundstage, no detail, sloppy imaging and separation, no bass and what is there is super loose. the 600 series (with the exception of the 660) reminds me of a tube dac, fed into a tube preamp, fed into a tube amp and everything comes out oversmoothed and sounding like you’re artificially forcing a mushy sound that’s 100 yards out closer with grainy gain. all this being said, it’s pleasant. i do like it, but they do nothing specific other than nice tuning that stands out to me whatsoever. i don’t think they’re a hard pass or anything but they are just nothing special or anything that is even close to "wow"ing me.

Huge differences in opinion here though… i personally love the 990… has a special place to me. Granted 880 is better in almost everyway

I have enough fight more or less close to me at the moment. Actually just wanted to throw the easily said “A is terrible” ball back with “B is terrible”.
In short, I kind of liked the Dt990 and was immediately unimpressed by the HD650.

Did we help OP to find the right setup so far? Think not.

With DAC and amp 350 Euro is not too much especially because we don’t get the common 100 Dollar amps (Magni, atom) here easily. Next priced thing would be like the topping L30. Or maybe an Topping e30 with a mt-602.

But my pick would be the topping dx3pro plus (the plus is important) DAC/Amp combo in combination with the DT990.
Alternatively, for more neutrality, the dt880 or HD560S. All of them have some bright spots in the treble though, with the Dt990 being the fun one because of the midbass bump (guess that’s why I liked them)

I’m not sure if Italy is in the zone that beyerdynamic sells B-stock, but that would be the first thing I check.

That looks to be a 40hz and below down tilt rolled sub bass with a 2 dB boost from 50 to 200hz. Sennheiser seems to be one of the few headphone manufacturers understanding to emphasis a frequency range you only need a small boost to get desired effect without horrendous masking or other resonances in the response.

It does not bleed into mids and doesn’t mask.

Adheres to a neutral target better than nearly any headphone till you hit the Dan Clark Audio Ether CX. For the price it is so excellent it wipes the floor with a lot of competitors.

The best OP could get is some DT 880 32 Ohms or second hand 6XX’s even any entry level dac and amp will do the trick pretty much done.

Interesting conversation. Not really answering the OP’s question though. Their budget (including Dac/AMP) is max €350. So the Sennheiser HD6XX series are out on budget. The Sennheiser 560s is €165 on Amazon.it.

I have the 560s, and wear them with glasses. They are perfectly comfortable, light, zero comfort issues. The sound is good, detailed. The 600 series (in my opinion) have better timbre, and as such I prefer the HD600. But it doesn’t matter, as they are out of budget.

The Phillips Fidelio X2HR would also fit the brief in terms of comfort (the clamp force is high for me, but I’ve got a big head) and budget. €99 on amazon.it. However, I would not recommend them above the 560s.

With regards to Beyer, my only experience is with the DT770, and I wasn’t a fan. But they were also mostly comfortable, though I did have to buy a ZMF pad for the headband, as they gave me a hotspot on top of my head. YMMV.

OP - I think you absolutely should invest in a dac/amp (a single device with both dac and amp). Probably something by Topping or SMSL would fit in your budget and be available on amazon.it. However, I think you should investigate specific models, because they are not all equally good. I’ve had some good and bad experiences with SMSL. The topping dx3 pro (mentioned above) is €199, so with the 560s would go just over budget. There would also be other options outside of amazon.it.

If it’s still not sold, there’s an ESP95X on headfi classifieds for 250. I don’t think there’s much out there that can touch it at that price. I think you need to have a 6 month old headfi account already though.