Sounds like Japan is going to stop accepting packages posted through EMS. If you recently ordered something from Japan there is a good chance it’ll get rejected and returned to the seller. Read that shipment by ship is still being accepted but could take quite a long time. 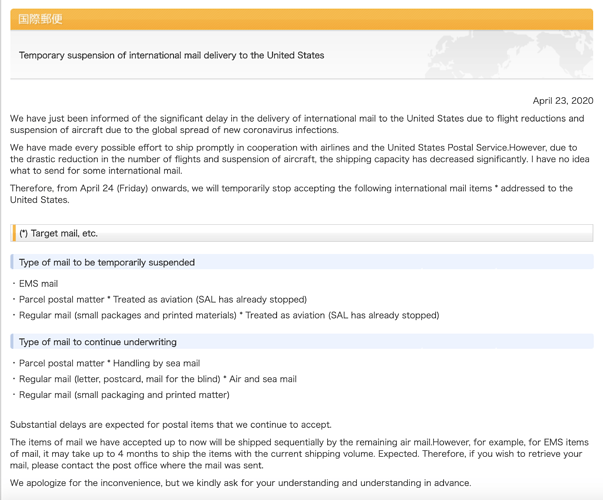 Damn dude and my figure habbit is forcefully stopped

We’ll have to see if my package from Shenzhen ever makes it… According to the AnserX tracking number I was given, it has not moved since being accepted on the 14th.

Hmm yeah it looks like my package is also returned to sender, even though I ordered it a month ago and I don’t live in America. Well there go my Yaxi pads I guess…?

Yeah I have a package shipping from China hasn’t moved simce the 12th, but my understanding is they are de-prioritizing none essential international shipments.
I also have a shipment from the soviet union that’s done pretty much the same thing.

We just placed A large order of PPE from the orient, i’m not sure exactly where it is shipping rom, last i heard it was Hong Kong but that is not verified. What i do know as fact, that was an additional $65,000.00 US was tacked on for shipping charges Which no-one was expecting, including the vendor. This caused much consternation and grief along with a Convoluted series of events seeking approval and additional funding In order not to lose the order to another agency which was happy To step in and take the shippment off our hands…

Lots of fucked up actions going on world-wide currently In reference to shipping and receiving.

Apparently Yaxi switched to DHL for sending their pads abroad. I got a message saying DHL received them today and expects to have them on my porch by next Wednesday. That would be some serious impressive shipment if they manage to get from Japan to the Netherlands in less than a week.

That would be some serious impressive shipment if they manage to get from Japan to the Netherlands in less than a week.

Can’t be train then as that takes 22 days.

one of my orders from japan just got froze lol . I ordered through SAL and not EMS

China has slowed down for me but otherwise gets to me fine. Japan just didn’t respond quickly enough to covid so they have their own issues