Trying to find a high end all rounder system so here it goes. Apologies for the never ending text.

My experience with the gear I have:

note: I understand the jump I’m doing is crazy but I don’t have time to progress slowly from 700$ to 5000$ gear, I’m sure of what I like in sound as I tried to explain above and just want to come home put on my headphones zone out feed my soul in the limited free time I have and move on. So please help me make my dream all rounder system

This is what I can recommend based on personal experience. It is clear that your wallet is open to go MUCH above the price point of the SR2.

ZMF headphones are among the best on the market, so I doubt you can go wrong with them. The Diana’s are a 50/50 headphone, some swear by it, others consider it overpriced and underperforming.

Have you ever considered Kennerton headphones?

I meant like how the nighthawk and 58x don’t feel forced while the 1990 is aggressive in its presentation.

Have you ever considered Kennerton headphones

Have zero clue about those

Well, in that case, make sure to read and research about Kennerton’s, because they are as well regarded as the ZMFs.

I still hold my recommendation for the iBasso SR2. Also, there are two sets of ear-pads with them, and the sound signature changes quite a lot with both of them. One gives you a more intimate and present sound presentation, while the other one balances everything out and makes it breathe more. I have two pairs of these, so I could AB test them with different sets of pads.

I will check them thanks

Tube your 58x. Done. Its much better on a tube. Preferably Darkvoice and ill back later and link some recommended tubes that are cheap you can roll

Thanks but I’m asking about a high end system preferably with the gear I mentioned above. Don’t want to mismatch the synergy between them before I buy.

I’d take one more stop in midFi before proceeding into the big boys:

Burson Audio Soloist 3x for sale. Here's the Soloist 3x (released 2020). I pre ordered this from Burson to use as a preamp but already moved onto something else by time I received it in December of 2020. Less than 10 hours of use o...

Selling my Holo Cyan DAC (DSD Edition) due to upgrade to a T+A DAC8 DSD DAC. I received the unit from Kitsune about one year ago. List price: $1099 plus $90 shipping. It is a terrific NOS DAC for the price, especially if you use HQPlayer or Roon to...

Maybe not perfect and you might have to wait for a deal to pop up on the Clears but this would be a nice setup… You can roll op amps on the soloist to get the sound signature a bit closer to what you want. You could get one helluva nice setup for $2500 - $3000 all in and not having to go $3k per component.

I would second the Clear recommendation. I have and love the Elex’s and I assume the Clears would be nicer.

The Violectric amps are amazing, but at that price point, I suppose they all are.

Lastly, I would never buy another piece of Burson gear, so be careful on that one.

Your set-up will be endgame, an expression that is often overused, but not in your case.

It might be worth looking at Grado. You said you really like the sound of the HD58X and I find the Hemps have similar bass and lower mids. The upper mids are definitely different since they have the signature Grado peak at 2.1k, but it still sounds very natural imo. Also the treble is a bit brighter than the HD58X but never overly bright or piercing.

The only issues are that Grados tend to have a very exciting presentation and the comfort is not the best since they are on-ear.

Though it might be worth looking at their higher end stuff since I’ve heard the 50mm drivers in the GS1/2/3000e and PS2000e are more laid back and all of those headphones use the over-ear G-cush pads.

I’m not knowledgeable enough about amps and dacs so I’ll let others help you there.

headphones.com has a run of OG Clears for $990 right now:

damn sorry you had a bad experience with burson… I had the conductor for a month and demo’d the soloist 3xp for 1 week and loved it per $ spent. It ran a bit hot which is to be expected from class A and the volume control did have a weird dip mid way. I guess it has power amp mode that bypasses the volume control and you can roll op amps which is something I didn’t do.

The only issue I’ve seen reported on the 3xP was this and Burson took care of the customer: 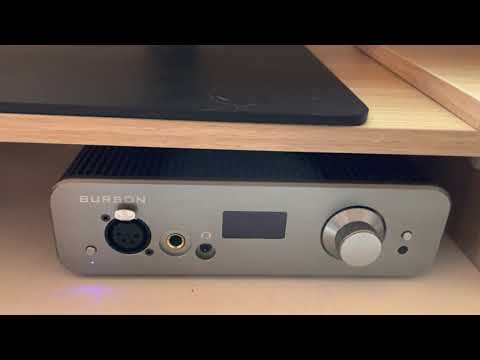 I had a bad experience with a Burson Fun amp. The results from the product, the dealer and the company all sucked.

But maybe the more expensive pieces are built better. I would never touch them again. Every so often I read a review and I go, “That’s pretty cool”, and then I remember my experience and move along.

I understand the jump I’m doing is crazy but I don’t have time to progress slowly from 700$ to 5000$ gear, I’m sure of what I like in sound as I tried to explain above and just want to come home put on my headphones zone out feed my soul in the limited free time I have and move on. So please help me make my dream all rounder system

So I totally understand the desire to move higher to the top quicker, but honestly I don’t know if it’s the wisest choice without hearing the 1k ish range of headphones and medium quality source gear

Out of what you have, generally what would you say you enjoy the most, and what traits from that are the most desirable to you? Generally the headphones you plan to be shooting for would all actually likely accomplish your goals, but in different ways from each other. So I’d want to know what sort of technical aspects you might want to prioritize the most. Since first figuring out the headphones is worthwhile and then source gear comes after that

So the 430HA is hit or miss for most, and really depends on the headphone at hand. Generally the 430 ha is a very non offensive, neutral warmer smoother relaxed type of sound. Really great tonal density, impressive impact and slam when called for, decent control as well, reasonably resolving. Spatial recreation is interesting, it is almost slightly artificial in presentation and tends to push things forward and in front of you, which can be desirable to some and not others, and it could either improve or interfere with some headphones’ spatial recreation. Dynamically I do think it’s good, but at times can feel a bit blunted and limited in this regard in favor of being non offensive and relaxing, so basically it can sometimes feel a bit too chill for some and it’s presentation doesn’t always mesh with everything

I would second the Clear recommendation

I didn’t propose the Elex’s as he discussed Euros, so I thought the Elex would not be applicable.

Thanks all for the suggestions.

Out of what you have, generally what would you say you enjoy the most, and what traits from that are the most desirable to you?

For the 58x I liked how natural it sounded but didn’t like how the treble felt grainy and the very small stage.

For the Nighthawk I liked how it was never offensive, the loudest volumes I ever tried. Bass was good but not exciting, also have mixed feeling about the floaty stage, so sounds good just kind of boring (lacks excitement in short)

For the 1990 I liked the stage and imaging style, bass impact, wearing style. Hated everything else (too studio like).

So I would say out of what I tried something natural like 58x with more exciting bass and smoother treble (that can sparkle) and more of a 3d stage and imaging (keeping the natural sound of vocals and instruments as much as possible).

Well I didn’t find anything appealing in this range other than BF2 and LP (most of the gear I saw is either clinical or on the dry side), and I know for sure I will not stay there as I hate to pay 3 times to reach the same destination (from your descriptions and others for example Amber3+MZ3 I liked the most but what is similar that is cheaper? couldn’t find so I jumped to that)…
Also for example out of Zmf stuff the VC appealed to me more (not because of price but how it sounds and all that), out of Hifiman the hekv2 appealed more (than Arya or hexv2) and so on…

If I must lower the jump then what about the pontus 2 instead of holo cyan or soekris 1541 and others in the range? is it good with things like the pendant or v280 (the warmish amps)

So out of what’s been mentioned, I do think that either the VC, LCD24, or HEKv2 seem like pretty great options here

The VC will sound the most organic out of the bunch, but won’t really be as technically impressive compared to the other two. It does have a good sized stage with lots of depth, a pretty smooth midrange and treble without sounding grainy or lack of detail or clarity, dynamics are decent, impact is a touch light but it does have enough bass to satisfy from a quantity and quality perspective imo, and fairly tonally dense. Generally pretty tonally pleasing and decently forgiving considering the range it sits in.

The LCD24 is going to be a warmer more rich forward sound, it’s going to be a fair bit more immersive in stage and out there, detail is pretty high without being in your face, dynamics are impressive, and impact hits with authority although not the most organic there, timbre surprisingly solid. Reasonable tonal density. Great speed and control overall.

The HEK will give you a very grand and large presentation overall, and it’s signature is something I’d call “balanced”, I would say it’s a bit less organic than the other two, but also very technical without sounding in your face or “off”, pretty well extended, very fast, reasonable impact and impressive microdynamics

Basically I think if you want something a bit more organic and inoffensive, something that is slightly relaxed depending on the amp and pretty lush and smooth, the VC is great in that regard

If you want something more warmer smoother and immersive with a very large stage and slightly forward fun, with impactful bass and great technicalities, the 24 makes good sense

If you want something that gives you a very grand and in front of you presentation, with lots of technical performance but not shoved in your face, the hekv2 is worth a look

Generally to me the VC and 24 seem slightly more up your alley than the hek, but I still think the hek is worth consideration. I think the Diana would place too much source gear demand and might be a bit too no nonsense

For source gear for the three, I would say keep it around or under 2-3k all in, depends on the headphone you would want to consider though

Thank you very much. Can you think of any amp and dac that are good match with the 24? I can only think of v280 if keeping it around 3k for the source.