I just bought these during the Hifiman Black Friday sale. Got them for $700 apparently they are still on sale. for some reason I was unable to complete the purchase off of Hifiman website. so I went to headphones.com which had the same sale and bought them there.

I’ve been wanting these headphones for a long time. I really like the look of Hifiman’s egg-shaped headphones. the driver in these headphones are massive and I wonder how they compare to say electrostatic headphones like the Stax or the Koss 95x. is it similar? should we perhaps call these ear speakers?

I heard that these headphones were originally supposed to be the Edition X V3. But it seems the Edition X V1 Edition X V2 and Massdrop’s Edition XX are tuned very differently from the Ananda. Go figure.

Anyone got a mod or solution to introduce some cup swivel to this headphone?

I had no problem with fit - did you recieve it?

not yet. they created a ticket at UPS but never sent it to UPS lol. So i had to email them and they said they would check on it. then i got nothing back. emailed again today so lets see what they say

I Wish you Good luck!

Ok got my Ananda today and wow. big drivers FTW!

Ok lets get the lame stuff out of the way. box it came in is very nice. i can tell its particle board covered with a leather like material. stitching on the outside with a large plastic plate. Inside is a silk like fabric. its nice and every headphone that costs over 400$ should have it. but the company’s will probably use this as a excuse to drive up the price. i would gladly accept a cardboard box if it was 50$ cheaper. it has no handle. i wish they would come with a handle. 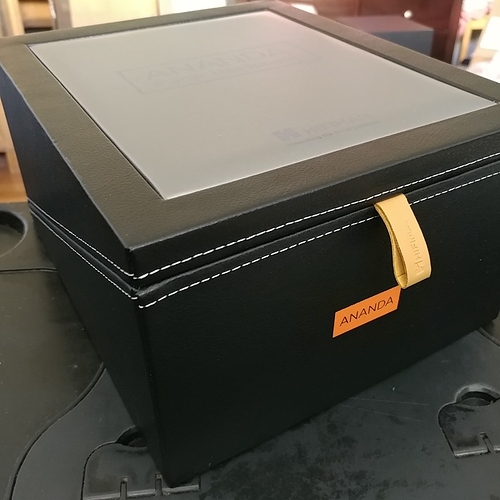 the cable is a little strange, clear plastic, a little janky but thin and long so the jank is good. the headphone fits fine and i dont think theres any leaks even though it has no swivel. But i can feel it on my jaw, not sure if this will cause issues for long term wear. Its BIG, going back and forth to the Elex is like going back and forth from a Sports car to a RV.

Ok sound. i thought at first that this would be a little like the Stax headphone. i mean it is a massive driver. but no. I dont think it has the detail and nuance of the L700. But it has more than the Elex. It plays music big and fortunately i like big music. and it sounds good for this. Songs like Simple Minds Utopia, Radioheads Burn the witch and Tears for Fears Working Hour sound really really good. I love how big sounding this headphone is. 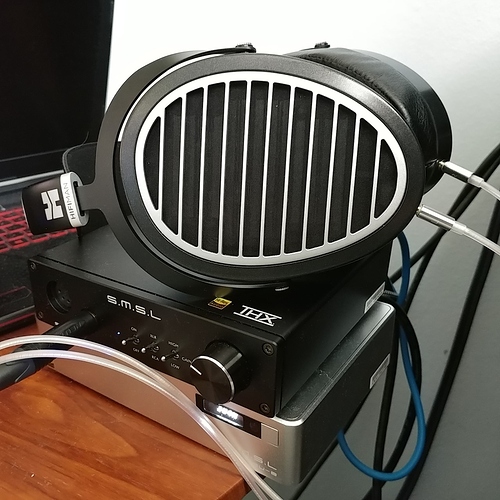 ok now because of the volume and treble. it doesn’t sound so good on certain songs. This may not be a headphone thats kind to older stuff, and i need that. i love the new wave 80’s and i want it to sound good. Newer stuff is better. And Moon shaped pool 48kHz/24bit sounds pretty good on it. its seems ok on better recorded and newer music.

The lack of midrange is unpleasing. The Elex and the Ananda sound close to each other except for the midrange. The Ananda has more detail and nuance. So its large presence and detail vs midrange. The treble and midrange are a problem. especially on older recordings. I took a look at the frequency response from DIY audio heaven. and from that raised the EQ 1.8 and 2.5 up for midrange, and the 7k and 14k hrz down for treble. The 7k down made it much less painfull. i think it sounds better but not sure. maybe sonar works or someone has a way to fix it better. Arya is more balanced though. If you got the cash go for that. But i love this headphone. Its great. 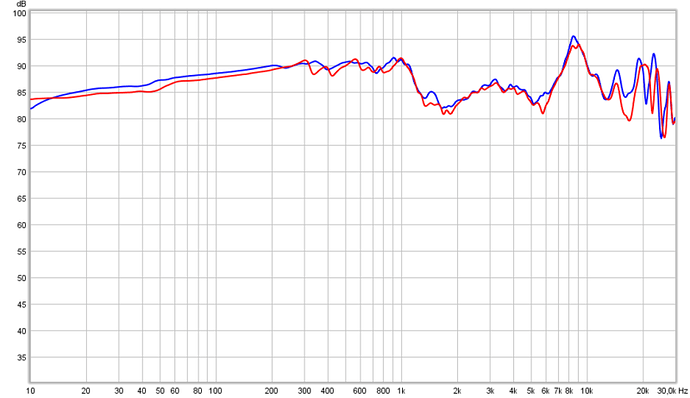 So overall, how do you feel about them? I get the sense you have some overall mixed feelings. Also curious to know how you’ll feel about them after a couple days.

I like them, a lot. if i can get the EQ to work i think they’ll replace the Elex. And it seems to be working lol. also older stuff sounds a little better, maybe burn in? The nuance is great. like the end of burn the witch, the decay, i can hear more there than the elex.

For the future i’d like to try the Arya’s. their frequency response is more balanced. I might want those instead. and I still want the L700’s

How is the build quality?
Are they just “okay” or do they look and feel like something that is sturdy?
Beyerdynamics are often labeled as being build like a tank and that I have never seen re a HifiMan HP. So curious about how they hold up in that area.

build quality is ok. the headband is metal, the grill is metal the cup itself seems to be a plastic unfortunately. the pleather headband is nice and thick. the pads are ok, pleather sides and cloth top. not memory foam. but these are 1000$ headphones. build should be a little bit better. dont know why hifiman likes to cheap out on their headphones but its much to their detriment. now they got a bad rep

but ive got to say. and i know this is gonna be debated. but with drivers, if you got a good headphone, bigger is better. it just is.

You are correct that it is going to be debated lol

I wasn’t saying I was going to since I already said my opinions on the matter, but other people might lol

Just because you keep repeating it doesn’t make it true

bigger is better. it just is.

My wife said that doesn’t matter???

I also find the treble hot. I have gotten used to the big driver HFM, but none of them from the Ananda to the HEKse have as much concentrated bass explosion as a HE-6 - instead being more diffuse - which is sometimes better, but not always). The HEX and Ananda both have tall soundstages - that are not that wide, but a sensibly modified HE-500 has a soundstage width about 40% wider, but shorter, more speaker like - rectangular and outside of ones head - also more in front - less in the head.

Until you get to killer cans, its all a trade-off. I too like the Arya, but I’m waiting for about a year when they are $900 or less used - but they have to be rev 1’s - forget this SE/Adorama bull crap again.

This is a forum mostly for people trying to figure out this whole hi-fi thing. I don’t want to be that head-fi/SBAF dick, but I think we’re getting to the membership point where someone needs to start calling people out for stating opinions as facts. I don’t agree with your blanket statement here at all, but that also doesn’t mean I disagree with you other opinions. There are a lot of new members here and I don’t think think they need to be influenced by your personal opinions unless stated as such

I’m getting confused, are we still talking about drivers? It’s not a euphamism for something else, right?