This is the official thread for the Hifiman HE500 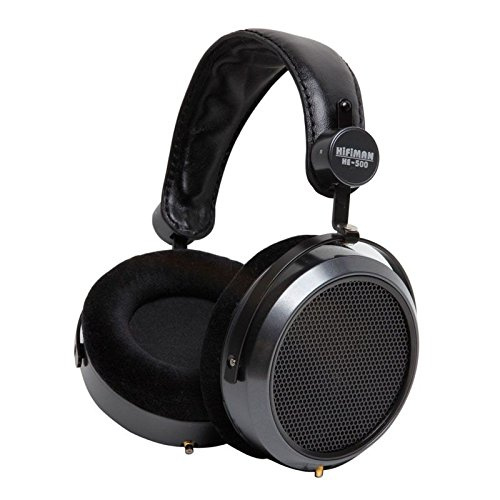 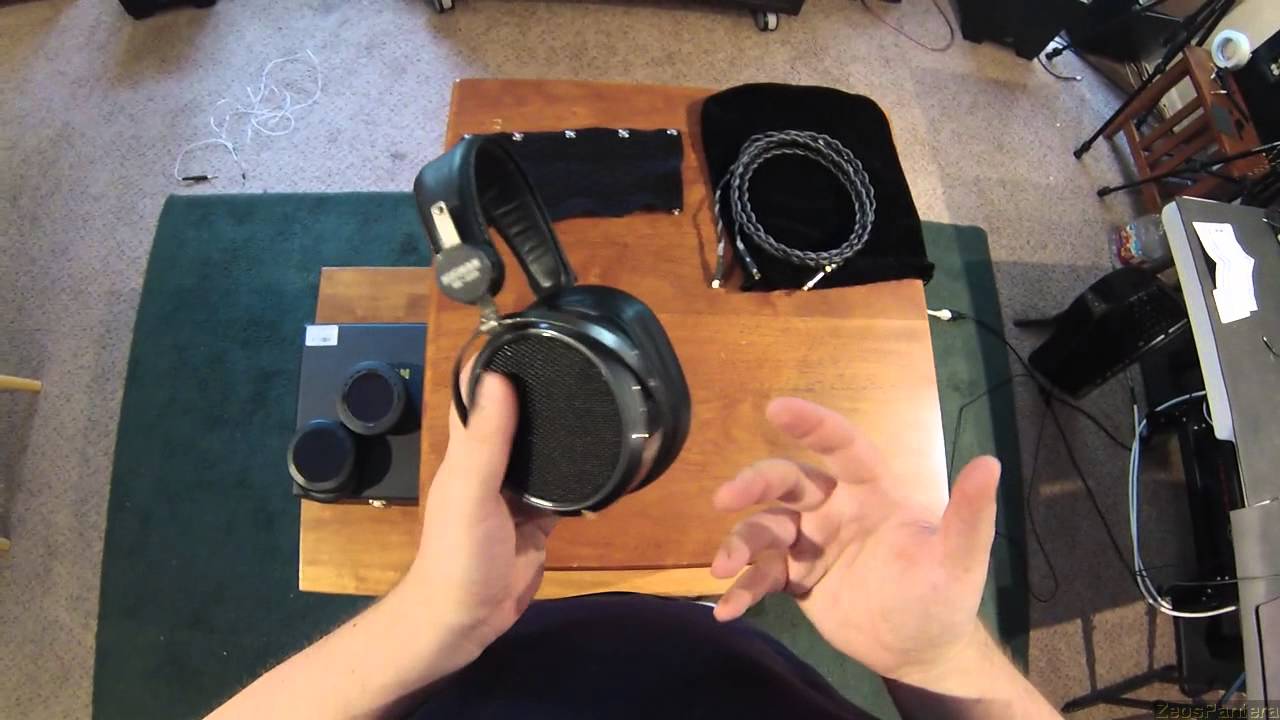 About time, killer headphones and will never part ways with mine. Much more efficient than HE-6 but still require a powerful amp.

On paper (HE500: 38ohms, 89 dB/mW), the HE500 needs 1.26W at 38ohms to drive it to 120 dB SPL. The CTH pictured below provides 1W per channel at 50ohms, so it probably covers the HE500 power requirements at 38ohms. So, again on paper, one does not need a beastly amp to drive HE500 up to 120 dB SPL (ear-shattering levels that should also cover any transients around normal listening volumes of 70-75 dB). With the CTH, Magni 3, and THX AAA 789, the bass of the HE500 can be described as slightly wooly, which is fine by me since it thickens up the HE-500 sound. That said, to my ears, when driven off speaker taps of a 55WPC @ 4 ohms class A/B power amp, the bass of the HE-500 tightens up considerably, it becomes more dynamic, and it starts to slam at an intensity approaching that of its older brother, the HE-6. To me, I think that most of the headphone amps on the market do not offer enough power (read: current) to control the drivers of the HE-500 to the level that more powerful speaker amps can.

As for mods, I just did a pad swap (velpads) and headband swap (Audeze’s comfort strap headband). The only additional mods that I would do is probably replace the back grill with something that’s more open. I know of the blu-tack mod to seal the drivers in the cups and the fuzzor mod to provide smallish wave-guides in front of the driver. I don’t think I will perform those mods since I really enjoy the slightly warm yet lush stock sound. If I want a cleaner HE-500, I’ll just reach for my HE-6. Too bad the mids of the HE-6 (driven by a speaker amp) aren’t as wonderfully done as they are on the HE-500. Just my opinion.

As for the CTH, I like 6C8G tubes like the one pictured below (Sylvania JAN VT-163 (6C8G)). IMO, they provide a more tubey sound than the stock 6922 and the bugle boys 6DJ8 that I’ve tried. The thing that I like about the HE-500 pairing with this tube+amp is that the relatively insensitive HE-500 (and Arya for that matter) seems to dampen, if not eliminate, most of microphonics from 6C8G’s; these 80 year old tubes are somewhat notorious for exhibiting more noise and microphonics than the 6SN7GT’s that eventually replaced them on the market. In contrast, the microphonics of the 6C8G are more revealed, and considerably more audible, on more sensitive cans like my HD6XX, and even on my LCD-2 rev. 2. 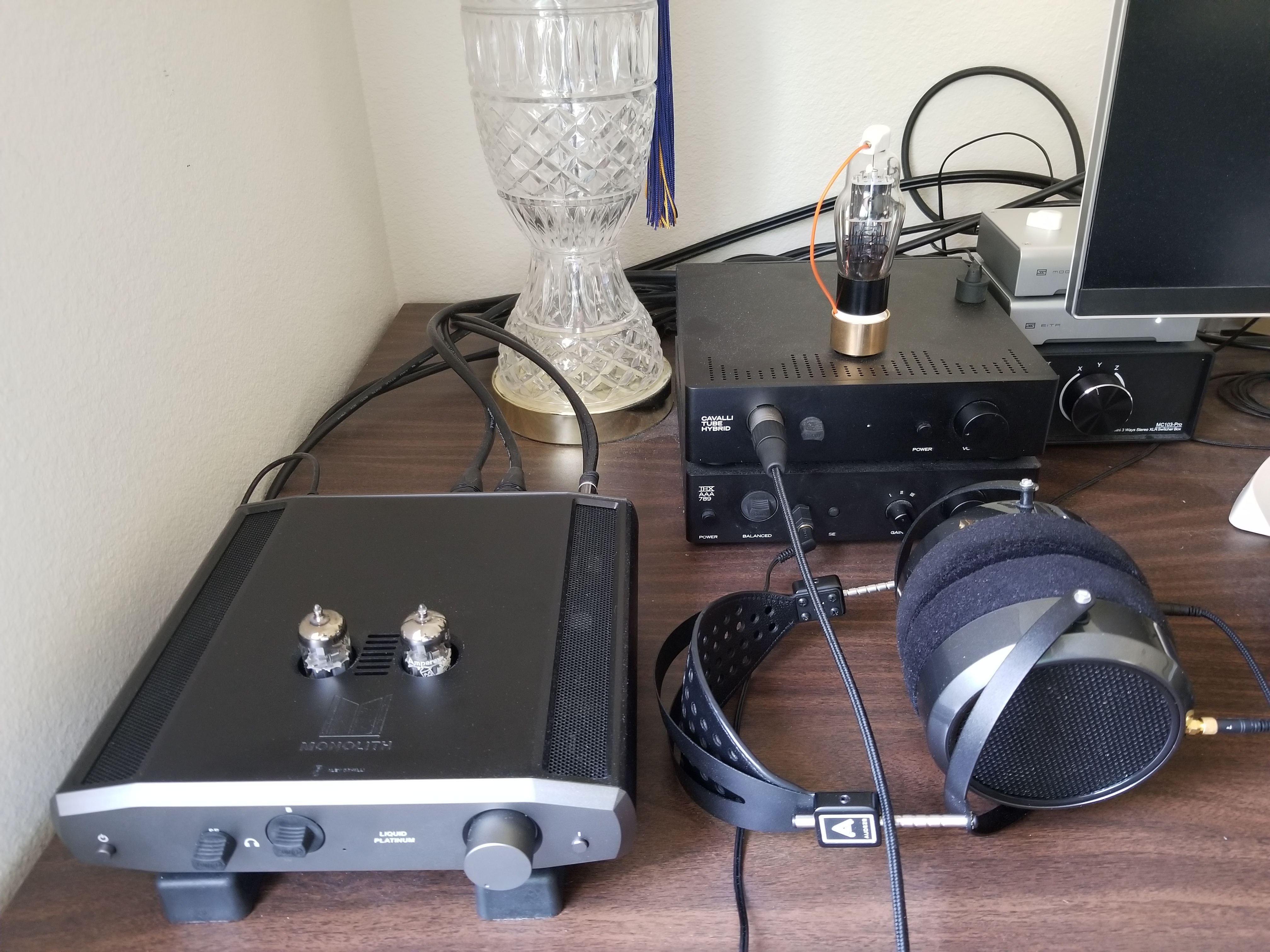 This is what I’m using with mine at the moment. They typically are better suited to solid state and hybrid amps but the Woo seems to have zero trouble driving them 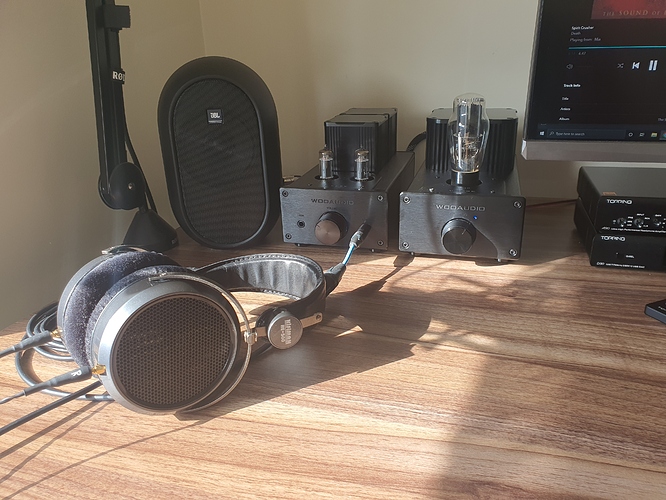 Nice looking setup you have there. Your WA6-SE is a pretty powerful OTC, so it should supply enough current to drive the HE-500 just fine.

How does the HE-500 sound on it? I wonder what is Woo Audio’s sound signature for their OTC’s.

Its definately less etched than the A90 and a bit slower. Low end is still fairly tight and controlled, but too early to give a final verdict. I used to have a Woo Audio WA6 in the past (going back about 5 years) and from my experience with that amp in the past the sound of it varied HUGELY depending on the tubes you used. I remember being rather disappointed with it out of the box with stock tubes and rectifier with the HD600 I had. Not so with the WA6-SE seems to sound great even with the out of the box tubes but it could just be new toy syndrome.