I’ll try to be as brief as possible, but I’ll also try to give some details on the situation. Pardon me if the post is too long.

I went to the USA last year, and I was really excited because I was going to buy a new headphone and amp that I coulnd’t find on my country. I bought a HD660s and a FiiO K3. I really loved it, it was supposed to be the endgame headphone for me. In May of this year, I was listening to it, normally, put it down, went to the kitchen to take something to eat, when I came back, the left side of the headphone was silent. Tried different cables, different sources, it was just dead.

They told me that the left side driver was dead, the voice coil burnt for some reason, and I agreed to pay for the taxes and shipping to get a new one.

I also wanted to try a new kind of sound, a more open and bright sound, specially for classical and soundtracks. I found a store selling a AKG K702 and I bought it. I was enjoying it, quite different from the HD660s. 3 days later, I picked it up and the left side was dead. Okay, weird. I got a refund from the store, but I started investigating what it could be.

I was most suspicious of static electricity, because my room had carpet flooring and I had a steel desk (coated with epoxi but still steel) and also I was suspicious of the FiiO K3, maybe not powerful enough, causing clipping? I don’t know.

I actually changed the carpet flooring for vynil flooring, I hated that carpet since the day I got my feet on this apartment. I also sold the K3 and bought a FiiO K5 PRO, much more powerful, should drive most headphone without issue.

In the meantime, Sennheiser started selling audiophile headphones here in my country so I would sell the new one coming from the USA and buy another one here to have proper warranty.

The new one arrived, and working properly. When the one from USA arrived, I managed to sell it pretty quickly (actually impressed me).

Now, last saturday I was playing some games, listening some music at night, using it normally, and then I unplugged it from the amp, hanged it on my little headphone hanger, turned off the amp, turned off the pc and went to bed. Next day, I turned on the amp, plugged the headphones, raised the volume and the right side was dead. Without even giving a signal.

I don’t listen to loud volumes, I’m getting rid of my steel desk (it’s probably not it but whatever) and I don’t freaking know what caused it this time. I’m already in contact with Sennheiser and they’ll probably give me a new one, but I’m afraid it will happen again.

I’ll call an electrician to take a look at my apartment’s power, but I’m not sure it’s that because, as I said, the headphones never gave any signals of something going wrong, and my other electronics work just fine.

Does anyone have an idea on what can be causing this? Just bad luck or I should call a exorcist?

EDIT: Forgot to tell, but, everytime the headphones died, I switched back to my Sony WH-1000XM3, that I use most of the day actually, because it’s really noisy here during the day, and I always use them plugged into the amp as well. So far they are surviving and also never heard anything weird coming out from them.

The fact that a similar thing has happened with 3 different headphones means there is an issue - it’s not just bad luck. The fact that it happened with 2 different amps means you have to look at the only thing that is constant - you. How loud are you listening? You may be frying them.

I don’t really listen to it loudly. That’s why I use the 1000XM3 during the day, I don’t want to fight the background noise with loudness.

To make it more visual, the FiiO K5 Pro dial turns from 7o’clock to 5 o’clock, I never went past 12, but usually when I have to turn it up a little bit is when the source is a lot quieter, and it’s always at low gain.

Shouldn’t I be able to listen to it crackling, clipping or distorting if it’s too loud?

This is how I’m using them with the Sony, the HD660s just needed a little more volume to be as loud as the sony. 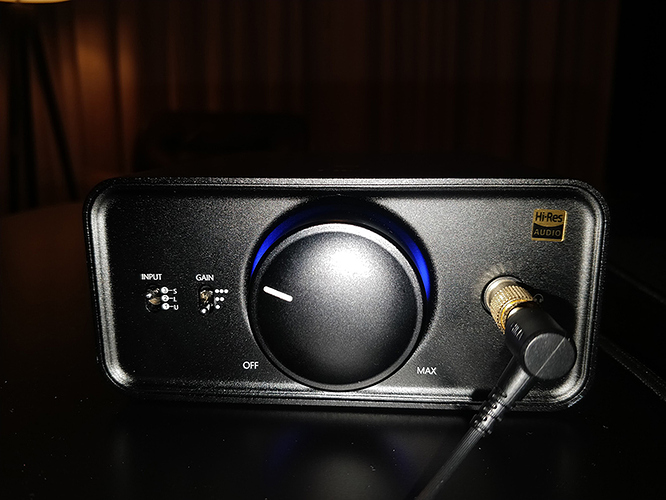 let me think on this a bit…

Do you regularly plug/unplug the cans while the power is still on and the volume is not all the way down?

I always left the first HD660s and the K702 plugged into the FiiO K3, and just turned the amp off. The second HD660s I lowered the volume to 0, unplugged the headphone and turned off the amp. Did the same on reverse to turn it on.

The K3 and K5 has the power switch on the volume dial, so to turn it off the volume is all the way down already, not a separate button like some other amps.

Btw, thanks for trying to help me solve this mystery, it’s been something that is on my head since the first headphone died and I never managed to find a solution

Ok, the proper procedure is to not unplug the headphones until the device is off. And to plug them in before it’s turned on. Basically no plugging/unplugging while device is powered. The volume should be all the way down in both cases.

Usually things aren’t so finicky but given your situation we have to look at uncommon potential causes.

I’ll think some more on what else may be the issue.

My guesses would be power surge or static electricity. Even without carpet or other environmental factors, some people just generate the stuff, just ask @LeDechaine

But that should give another reason to why the first one died then?

I still have the second HD660s with me, I’ll only be able to send to Sennheiser after the holidays, put there’s a chance that it’s just a loose connection inside the headphone. The AKG I never knew if it was the driver itself that gave up, the store that I bought it would not give me a diagnostic on it.

Thanks again, really appreciate it

EDIT: When I turn off the amp with the sony connected, I can hear a little pop 3 seconds after its off, and a little pop when I turn it on, also, I noticed that I can listen to a very faint buzzing that goes away if I touch the amp, I can only hear it when the ANC is on, probably never heard it on the Sennheiser due to background noise.

This is also possible. Any electric abnormalities you’ve noticed in your home?

Not really, the power here is not great but I never had any problems. I never had my PC randomly crashing or lights blinking when someone turns something on on another room.

It’s storm season here, but last week there wasn’t any, and when the first headphone died, back in may, it was winter, so no storms.

I really want to call an electrician to do some tests here, but covid is making it hard right now

Do you use a surge protecter?

Yes I do, my PC, monitor and the amp is connected to a pretty good surge protector, I spent quite a lot on it actually. It’s a pretty reputable national brand here, that does alot of stuff with surge protection and electrical installations.

The pieces of the puzzle are missing the connection.

On unbalanced TRS, Left is Tip. Worst case, Tip makes contact with all poles during insertion/removal.
However, Tip and Ring are only connected to Sleeve. Sleeve is the last contact to mate, after Tip and Ring.

I find ESD hard to believe. Surely, at 12kV, you would have 80 Ampere flowing through the voice coil. Unless the duration is long enough to heat up the copper to melting/vapour point, this would not kill the driver.

LTT and Electroboom recently tried to kill a RAM module. Was not easy.

Using a XLR female to 1/4" male and leave it always plugged to the amp and get a XLR cable to the headphone would solve this issue than, right?

But what I still can’t understand is why the first one died then, because it was still plugged in and running, I just left it on my Mousepad, went to the kitchen and when I returned it was dead, and the sennheiser technician told me the coil was burnt. Btw, I was using it with a 2.5mm balanced on the Fiio K3.

I saw that video, I really doubt it is ESD too, but I changed the carpet anyway because I hated it, it was just an excuse, and I got afraid that it would damage my pc in the long run.

Using a XLR female to 1/4" male and leave it always plugged to the amp and get a XLR cable to the headphone would solve this issue than, right?

But what I still can’t understand is why the first one died then, because it was still plugged in and running, I just left it on my Mousepad, went to the kitchen and when I returned it was dead,

This is what I meant by “missing connection”.
Behaviour like this points towards a fault with the amp, not to anything related to connections being made.

To my knowledge, the K3 is Op-Amp based. Except for a select few, most Op-Amps can’t kill a headphone by themself (current too low).

Depending on your willingness to tinker, you could get a TRS (or TRRS 2.5mm) jack and a pair of 100 Ohm resistors. Then you would measure the voltage accross the resistors.
It should be the same value and be close to 0.

Behaviour like this points towards a fault with the amp

The OP changed amps and had another can go bad.

Looks like the K5 is also op-amp based. I don’t really know what this means but unless both the K3 and K5 are faulty, the amp should be crossed out of the list of possible culprits?

I still need to know what exactly happened to the second HD660s, I’m hoping it’s just another problem and not related to the first can and it just be terrible bad luck hahaha

I think I’ll get a XLR adapter and take the whole thing about the way to plug the headphone to the amp out of the list too.

That is why there is a picture of the K5 here…

Might aswell break out the Ouija board at this point.

I’ll call an exorcist. I’m having a ridiculous amount of bad luck with electronics since the end of last year. My Dell monitor went bad, I had 2 OLED TVs that I had to send to warranty, my ipad had lines of dead pixels . But having two headphones die faster than cheap supermarket cans made me quite frustrated. And die without giving any warning, that’s the worst part, specially knowing they the 600 series is know to be reliable and last for years