Secondly I had a Emotiva ERC-4 in my sights. I have trust issues with it, but for $600 it’s got a balanced DAC output, digital outputs/digital signal converter, & a CD player & remote.

Third discovery was the Rotel CD11 Tribute. It’s $600, & has a built in DAC with RCA output. It also looks awesome. It’s got hifi heritage too.

Next in the search came the Denon DCD 600NE at $430 with an RCA DAC output & some proprietary processing. Would it be competitive with the Rotel CD11 Tribute in SQ?

I’ve checked into Tascam & Denon pro multimedia players that have balanced DAC outputs that are both in the $500 range.

I don’t care about gapless. Never heard of it until last week. Why would you want songs back to back without pause anyway?

Is there anything else I should put on the list to increase my indecision?

Because I have DACs, and DACs are plentiful and evolving — my desire is for an affordable cd transport that has a digital output that doesn’t also try to be a DAC. I’m waiting for great feedback right there with you.

Why would you want songs back to back without pause anyway?

Some albums like Dark Side of the Moon are recorded so that the songs flow into each other. To me it just sounds wrong with gaps.

I would just get something with a good CD drive and use coax or optical to go with an external DAC.
The DACs inside CD players might be okay but in that price range a 100€ DAC will probably outperform whatever is inside those players.

What’s the CD player’s role in your line up? Are you looking for a CD player that you can plug headphones directly into and listen? Or feed an Amp to power headphones/speakers?

you’ve spent tens of thousands on CD’s…give them justice and do this upgrade the right way!!!

The CD player is for playing my CDs. I already have everything else in my system that I need, except a source.

Currently I’m using DISH/SiriusXM as my only audio source, but I own a bunch of CDs. They’ve mostly been in storage between 10 to 15 years, yet they’re my 3rd CD library I have accumulated. The first one I sold to Hastings in the 90s. The second one was abandoned.

I’ve also got around $500 worth of new 180 gram vinyl records, but no functional record player. I initially planned to only listen to vinyl. That will be at least $1500 to get a record cleaning machine, player, phonostage, static brush, going the budget route.

That’s why I pulled my CDs out of storage. It will be much easier to get a CD player in my system than a record player.

The Rotel is really the only one I’m confident would have good SQ on its own. Budget wise it fits right in with my preamp, & power amp, but the Emotiva has more features for the same money. The Denon would leave me some funds for a few new CDs or a Topping D10 balanced DAC. What is most important to me is SQ for the money.

There are loads of CD transports. Not sure what country your based in but here in the UK we have
Roksan Attessa
Audiolab 6000cdt (AUDIOLAB 6000CDT REVIEW! WHY THIS CD TRANSPORT IS A BUDGET CD PLAYER KILLER - YouTube)
All less than £500GBP.
The Audiolab is a killer and the cheapest of the lot.
If your after a player you have loads of choice from the likes of Marantz, Denon and the like.
With the investment you’ve made in disks, I’d go transport/DAC route as this allows the best upgrade route.
Get the best transport you can afford and get a cheap DAC and live with it until you can afford to upgrade the DAC …high quality dacs can be had for not much money these days…we love n fab times if your a music lover.
Enjoy the journey

I owned the 2010 version of this for about a decade. Very good sounding DAC. Using RCAs > HeadRoom desktop AMP > Headphone. I wouldn’t hesitate a bit in buying more NAD products if I needed them. 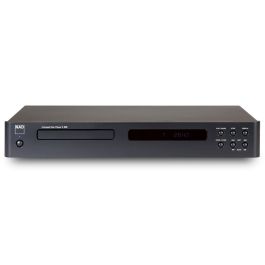 For over 45 years, NAD Electronics has earned a renowned reputation for creating great sounding products at amazingly affordable prices, and nowhere is this more evident than in NAD’s CD players. When it comes to CD players, NAD’s veteran engineers...

Fluance makes good players ranging from $200-500. Plenty of vintage players out there that are as good or better than a good amount of sub $1000 modern players.
https://www.fluance.com/turntables

Record Cleaner $80
Record Washer System by Spin-Clean | Deep Groove Record Cleaning Helps in Reducing Pops and Crackles | Album Cleaner May Fix Skips That Have Lingered for Years | Proudly Made in The USA https://www.amazon.com/dp/B002UKSZUU/ref=cm_sw_r_cp_api_glt_i_7KNZG1AQ6V9X5H5RRN8M?_encoding=UTF8&psc=1

Spent 20 minutes on a reply that vanished. Im out.

If you can do the normal size of the player, you have many options. That NAD C538 would do it for me if I could manage that size. But I personally am constrained by the fact that I am on a desktop. So, it’s gotta be small!

There is another thread regarding CD players. @Ohmboy thanks again for that suggestion of the Pro-ject CD transport. The sticker makes it a no go, but the footprint is about right. I have my eyes on a couple that may do the trick. The Denon DCD-50 looks just about perfect. I have had a DCM-380 for 10 years plus now in the main system and it still looks and runs like new. So, I like the brand. The DCD-50 has been discontinued, but there are still some new ones out there at a reasonable price. I should probably snap one up while I can.

@AntiWoke Good luck on your hunt. Given the budget I would take a serious look at the NAD.

Sorry I went a bit off topic there, I just wanted to make the possibility of adding the turntable setup less daunting/ expensive. Hope you find a good

At multiple different times I’ve had the Emotiva ERC4 or the Rotel CD11 in my online cart & all I had to do was press order. I can’t seem to do it. I’ve got the funds. I just can’t let them go as some emergency could & probably will occur as soon as I spend the extra money I have.

The NAD CD players are out of stock with unknown ship dates at the places I shop.

The 6000CDT is a dedicated CD transport incorporating the same slot-loading mechanism as Audiolabs flagship CD player the 8300CD. Extremely robust and reliable it uses a read-ahead digital buffer to reduce disc-reading...

I’m terrible at saving so if I want something within reason I buy.

Coming from the perspective of someone who owns close to 600 records, 500-600 on a player seems highly resonable considering the amount of time I spend listening to my records and how much they cost/ are worth. If I was in the same position with CDs and that was my main source of music listening I wouldn’t hesitate to spend 500-600 on a player that is going to bring the best out of those CDs. You have twice as many CDs as I do records so I think you know My vote on what you should do

I know the Rotel will sound fantastic, but I can plug in other digital sources into the Emotiva, such as Satalite box, Bluray player, computer.

Trying to compare the two different DACs, all I seem to get are stock tips.