I have purchased Beyerdynamic DT 990 Pro (250 ohm) and looking for an Amp Dac to drive it.
I had already made my mind to go with ifi ZEN DACV2.
However, the seller told me the Zen DAC V2 doesnt have enough power to drive DT990’s to their full potential. They suggested me to go with Aune Audio X1s Pro. I am little hesitant to go for Aune Audio as its little out of my budget and I didnt find enough reviews of it online.

If anyone has used any of these two amp dacs with DT 990s please let me know your views.
I am open for other options within $200

whether the Zen v2 is adequate depends on the model of 990’s you bought, since you can choose from three different impedance levels. the lowest would work okay…the two higher, nope don’t get it.

I have the Zen and LOVE it, but…that said, I notice I have to have my volume turned a bit higher to drive my 50 ohm headphones vs my 35 ohm headphones…so you would have to crank it more cause I think the lowest 990’s is 80 ohm?

you would do a lot better getting something like the Asgard 3. it oozes power!

My DT 90 pro is 250 ohms. I spoke with ifi audio folks and they redirected me to Headphone Calculator on their website. The results are shown in the image 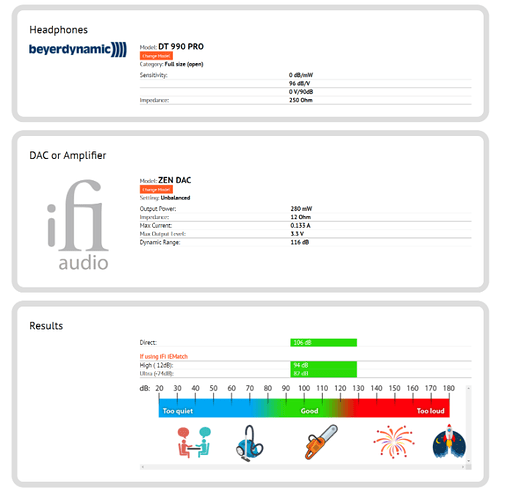 When I showed this to the seller they said Zen Dac would drive the DT990’s but at lower volume levels. Also, signature sound might be lacking

yeah, the 250 ohm model would not be good to pair with the Zen. you would do much better with getting something powerful like the Asgard 3 from Schiit…or perhaps the Liquid Spark from Monoprice. the 990 is treble sensitive, so it’s usually best to pair it with a warm DAC / Amp. the Zen is definitely warm, but not really enough power. the Liquid Spark has power and is a warm amp as is the Asgard 3. having a DAC is good, but the amp in more important in this case. To use the amp without a DAC, you plug it into the PC’s audio out, but have all the volume levels in the OS and software you use turned to max and then use the amp’s volume control to adjust the sound levels as needed. I did this for some time with a Schiit Vali hybrid tube amp I had, when I didn’t have a DAC.

@Marzipan
Thanks for this information. I checked and both the options you mentioned are not available in India

If this is the case may be I have to get the Amp first and later think about Dac when I have the budget.

i run hd600’s off of mine and i LOVE the pairing. you do have to crank the nob to about noon-1 oclock to get loud(imo anyways). with older recordings, that are recorded at lower db levels then most modern is, you have to crank it a little more.

i also have the new ifi 5v power cable coming tomorrow, will let you know if that gives more headroom on it. i also have a balanced cable coming, been running SE which has less power.

edit: running off of usb power and SE atm.

link us where you shop. makes it easier to see whats available to help you out.

edit: also, that aune is a perfectly fine amp. pretty good actually. its just not really a value purchase these days as you can typically get as good for cheaper.

@joshua_g
Sure. This is probably the only online store in India where some of the most popular Dacs amps and headphones are availablehttps://www.headphonezone.in/

edit: mt602 is a very nice amp and has plenty of power. if you can swing the xduoo and zen, even better. but honestly, the donald dac is not far behind the zen at all.

a hybrid tube amp would be good, as they are warm sounding, which will help tame the 990’s peakiness.

i like my 880’s off of zen feeding crack. i agree, beyer treble is a bit much for me w/o tubes taming it some

edit: i can also hear a mouse fart. so i may not be the best judge of volume potential as i listen to stuff i think a lot lower then most. loud to me isnt loud to others a lot of the time is what i guess im getting at.

@Sanketthor i think the zen dac + mt602 will make you happy. try to swing the tiny xtra over the aune if you can. in the mean time, get the mt602 and use on board dac if you have to. its the best option imo from that site in your price range for an amp to match with the beyers

edit2: and everyone gives pc dacs crap, but they honestly arent the worst. their only real pitfall in this day and age is potential interference from other parts in the pc. i agree with marzipan that an amp will make a much bigger difference then dac to start. windows also has a mixer to tweak the sound some in the meantime if you feel the need.

I checked and MT602 are not available readily.
Sorry if I sound too dumb here, but If I go only with an Amp first, how would I connect it to my PC?

3.5mm to rca. posted wrong thing on last one.

i think, of the options, its worth the wait of 3-4 weeks. tell them to order it and you will pay for it when it gets there. buy the zen dac in the meantime and use its amp. it will drive them. most likely at least loud enough.

if they wont order without paying ahead of time, go with the zen dac and save the little bit more you need and order the mt602 when you can. the zen dac does have an amp, that will have more juice than pc 3.5mm jack.

This sounds a lot convincing to me.

Edit: I can get Zen DAC first and start using my DT 990’s.
When I have additional budget in a month or two, can request the seller to get Liquid Spark if possible.
If not, I can order MT 602 to pair with Zen Dac and complete my setup.

and as far as the zen dacs amp, a lot say its under powered, and in some regards it is. but i dont find volume to be one of them. it has fairly narrow soundstage, which i think helps it to drive harder to drive things. for reference, i use roughly 1 oclock on the volume nob the vast majority of the time to drive my t60argons on the zen dac’s amp. on high gain on the lyr3(roughly 13 times the rated power on SE, hell maybe even more then that) im at the same 1 oclock to get the same volume.

edit: now, other aspects are waaaaaay behind the lyr3. such as soundstage width and depth, overall speed is much slower. but the lyr3 is a 500$ amp. i would expect it to be better lol. point though is the zen dacs amp can drive just about anything to decent volume in my experience. i will admit the amp lacks in other aspects quite a bit compared to dedicated amps.

that is a fantastic game plan to me! but thats me lol. know that your getting, what i call a traditional sound, with the zen dac. what i mean is a very warm tuning. im a bit older, and there was a lot less sound signatures to choose from when i was younger. there was warm or warm or warmer lol. companies were making more linear sounding things, they just were not available anywhere close to me. and i didnt even know they existed until i got older and the internet showed me them lol.