Is the Hifiman HE-R10 series a joke?

So I have no experience in anything audiophile but I just bought a HE-400i ver 2020. Later, I started looking at this oddly similar headband headphone (HE-R10P) which cost $5000+ on Hifiman’s website???

I was thinking like what on earth is Hifiman doing? They can’t just change the material of the headband and make a $5000+ headphone out of it, it’s just stupid. Like there is no difference between my he400i and it if I upgrade to it, it’s just sound quality.
At that price, it should be considered a luxury item and made with exotic materials and probably hand crafted. It’s just not worth it if you ask me.

I then started looking at people talking about they are just clones of a ~10 year old Sony that are priced like they are artisan products.

So now I know Hifiman also has a history of just copying other headphones and really overpriced their stuff which is odd considering they make one of the best headphones out there.

Any thoughts about it? Or just talk crap about it before it has a official thread (probably only reviewers will get it, don’t think anyone would buy) or its officially for sale.

Condidering it’s not the most expensive headphone that hifiman makes, nor is it even close to how much other headphones cost, $20k +
I could totally see people wanting it, especially since its a close back from hifiman, and it has that old Sony r10 charm to it. Im all for headphone companies competing, but yea pretty much looks like the Sony. But others, like ZMF, have used similar parts of the r10. That Sony is like a “unicorn” and has inspired many other headphones. I say get er done hifiman. Buts thats just my view on it, your opinion is totally valid

I don’t like the new headband which to me is cheap and uncomfy, and I don’t like how they ended up handling this when it came to “paying homage” to the classic sony mdr-r10 since they both said it was and wasn’t doing so. This being said, generally hifiman stuff is pretty sweet sounding that many like, they do make good products despite some of the questionable choices they make at times.

I’m not going to make any comments on their r10 since I haven’t heard it. Was thinking about picking up a pair, but after seeing what it has ended up being I am skeptical if it is what I would want (I was just hoping their planar r10 would be a closed susvara and that doesn’t seem to be the case), and I also don’t know how I would feel about owning both the real r10 and the hifiman “interpretation”

Also keep in mind that while this is 5k list, I suspect that it will end up selling around 2.5k used mint or open box (or less) fairly quickly. Like the susvara, which retails for 6k but can be commonly had for around or under 3k. Most higher end hifiman end up having a bit inflated list price and are more reasonable once they become available used or when dealers start to drop on heavy discounts

Personally I don’t care too much about build as long as it’s decent (I would consider the build on the susvara and hek to be decent but surprisingly comfortable), but it will be a deal breaker for some, but I do not like that simple style headband at this price

I digress , so do you think it’s worth the sacrifice for “more durability” as people said? I was tempted to get the he400s when my seller said they would not be in stock soon, I made the choice to wait (~3 weeks

Also keep in mind that while this is 5k list, I suspect that it will end up selling around 2.5k used mint or open box (or less) fairly quickly.

Oh yeah, now it kind of clicked, I saw how expensive Hifiman were selling the he400i and they were so much cheaper when I got them from my local seller. Got it now.

so do you think it’s worth the sacrifice for “more durability” as people said?

I mean there are indeed less things to break on the simple headband, but personally I prefer their suspension strap styles like on the higher end like the arya or their older he400i or he560 (the original woodgrain one) since they are more comfortable to me and really the new reinforced ones are somewhat sturdy (the older versions of this headband were prone to snapping at the yoke but new versions have fixed this for the most part)

Oh yeah, now it kind of clicked, I saw how expensive Hifiman were selling the he400i and they were so much cheaper when I got them from my local seller. Got it now.

Pretty sure the 400s has been discontinued, so I would be surprised if they were in stock

Surprisingly yeah, they were in stock when I bought my he400i ver 2020. Probably the seller can’t sell them for some reason. (guessing original he400i were more popular) 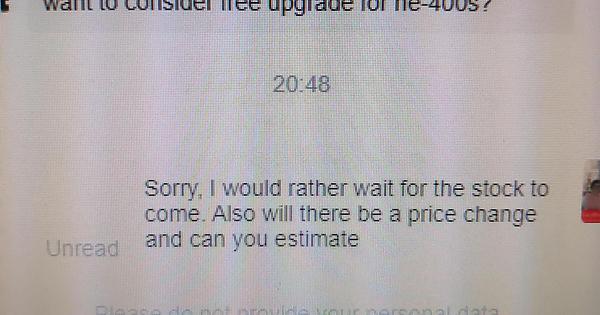 But others, like ZMF, have used similar parts of the r10.

That a good point. I hadn’t noticed how similar looking the Atticus and Eikon are to the r10. Especially back when they had silver ends on the headband and silver yokes

I can definitely see the appeal of making a new production R10, prices have skyrocketed in the used market where imo even mediocre quality examples are starting to push that 10k barrier which is crazy if you compare to their selling prices in years past, and personally I don’t think the r10 are really worth 10k for most people looking for a higher end headphone (that’s getting dangerously close to he90 money as well)

So the demand is there, but I guess having someone like hifiman try and make one has left a bad impression on some, and I can kind of see why. First, the dynamic hifiman r10 is really going to be hit or miss, hifiman doesn’t have a lot of experience in making dynamic headphones, and less making closed backs, so personally I don’t have the highest expectations. The planar version has the potential to be good, but also most likely will sound nothing like an r10, which might defeat the purpose, but I do have more hope for that one. And I guess secondly, the Sony r10s craftsmanship and care that went into that headphone will most definitely not be conveyed through the hifiman, it just won’t, and that is going to be a major turn off for some, since the hifiman r10 will most likely feel cobbled together in comparison with the build and craftsmanship of a real r10. And finally just the hifiman company itself, and all the things they have floating around about them just isn’t going to really jive with the people who would actually be looking to buy a modern r10 reinterpretation in the first place imo

But who knows, all of this could be wrong, no idea until it actually comes out

@M0N is there anything on the market similar to what the r10 is that hasn’t been so blatant about it?

I mean there are the other lower end Sony’s like the CD3000, CD1700, CD1000, etc of those in a similar family but they aren’t produced anymore and have started to become outrageously expensive as well. But for currently produced things, personally I can’t think of anything that has captured what the r10 has to offer

Wow, great info. Really explains why people are mad about it.

People just seem to view it as more of a fake or ripoff than a modern spin or interpretation, and I think that’s the most egregious offense in their eyes and why it’s getting so much push back

Has anyone heard these yet and care to comment?