Is The PSB Alpha P3 a Good Replacement To The Micca RB42?

Lately I’ve been itching to upgrade my desktop speakers. I love my Micca’s but sometimes they come off a bit bright. I also am worried that I’m not getting the most out of my components. I have a JNOG->A90->Vista Spark. I’ve heard the Micca’s can scale but after hearing about the performance of the PSB Alpha tweeter, I’m intrigued. The price and size also are big pluses, along with relative acceptance of being near a wall and preference to near-field.

I’ve seen other recommendations but they tend to be bookshelvess meant for longer listening distances and the recommendation seems like more of a guess or because they only have listened to that one pair of speakers. I can’t really go much higher than $200 as I have a lot of other things on my wish list for headphones and my living room system. Is it worth it? Or is there something else better for a similar price?

Be the trailblazer and give us your impressions.

I think I will!

Be warned this could lead to collecting bookshelves.

Fluance reference look great but didnt get a good review over the jamo 803 and the sony SSCS5, klipsch R15 came in 4th which i think sound better to my ears and play louder than neumi or miccas. Paired with a small sub im not sure the price gap of the klipsch can be justifiied over the miccas or neumis.

I was looking at small passive bookshelves for my desk and ultimately came down to the PSB P3’s vs. the SVS Prime Satellites. Ultimately, I chose the P3’s and I’m beyond happy with them. They are amazing for the price and size and measure fairly neutral with a little mid-bass Harman bump. They also hit surprisingly low for a 4" woofer. I have not personally heard the RB42’s, but I know ASR and a few other sites prefer the PSB Alpha’s over them. The P3’s should not be as bright as the RB42’s based on measurements that are out there.

Right off the bat, having easier speakers to drive was a nice upgrade. Gives me a lot more headroom, and the prospects of tube amps come to mind. I turned them upside down immediately, and was disappointed in the realization that the product info labeling and vinyl wrap seam is on the bottom. In retrospect it should’ve been obvious; oh well. Other than that they look awesome. The speaker grills are magnetic so you can just flip them to make them right-side-up. They are just as tall as the micca’s but aren’t nearly as deep.

For sound, I’m not confident in analyzing in depth but I’ll say that there is a mid emphasis and it sounds great. These tweeters are the real deal. I don’t feel a drop in bass quality compared to the miccas. There may be a slight decrease in the bass extension but I can’t really tell so I consider it negligible. If you want proper bass, get a subwoofer. These are desktop speakers after all. But most music doesn’t really rely on low-lows, so try them solo first. I was worried that I’d “hear” the cabinet more in the P3’s compared to micca’s as the P3’s aren’t as deep and have thinner cabinets; it’s obvious when you knock on both of them. Luckily, I don’t hear any of it, even when pushing to uncomfortable volumes so it’s a non-issue to me. Compared to the micca’s, I would say there’s an improvement in coherence between the two speakers and the sound stage came a lot easier to the P3s. This, along with more capable tweeters, gives the P3’s a step up in overall believability.

Lastly, positioning. I think they are very reactive to positioning, although this probably isn’t news for desktop speakers. Initially, I had them around my computer screen. They still beat the miccas in the above aspects, but when I spread them to the edges of my desk, the sound stage blew up! They have the detail in exchange for a forward sound if you toe them in. If you want them to chill out, toe them out. These also aren’t sweet-spot picky so that’s nice. But put those tweeters at ear level!

P.S.: These “image” well I think. And are great for movies!

I don’t think I’ll need to replace these for a long time. 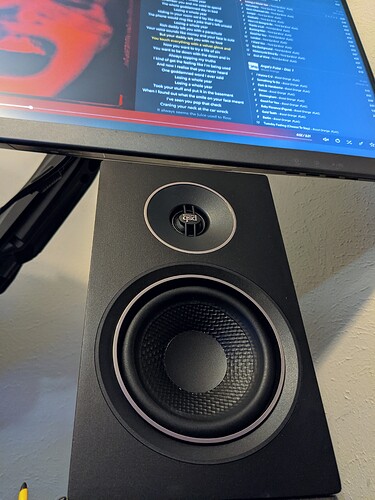 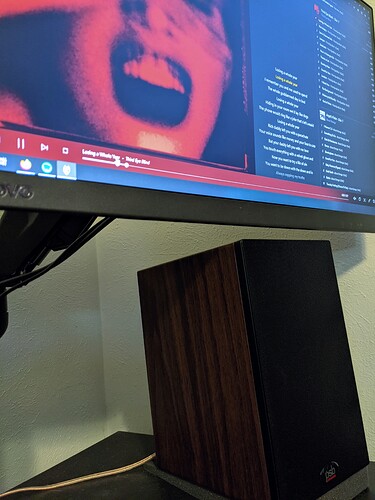 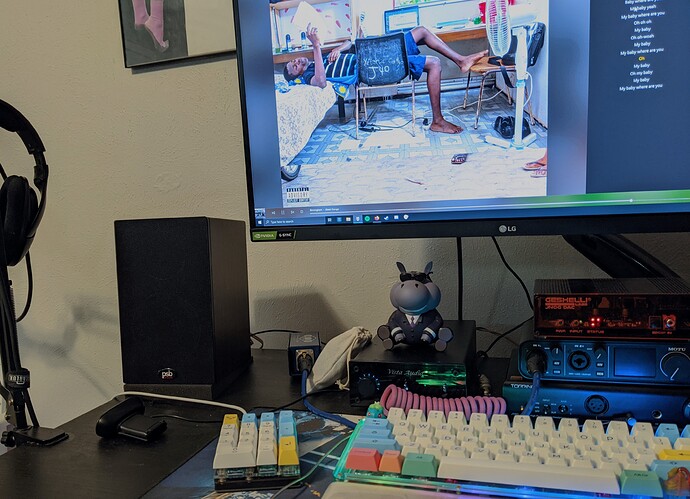 Glad you like them. Totally agree with your thoughts. The upside down design and the label and vinyl seam is really my only negative.

Goodlooking speakers are they wider at the base ?

No, it’s symmetrical. I just have it propped up on some foam wedges.

If one would be brave enough.
The “face” of speaker might come out from the cabinet. Then turn the tweeter 180.

Also a vinyl wrap would make look all nice.

Best to try after warranty.

I wouldn’t dare mess with any tweeter placement. It’s probably placed in the most ideal spot as is.

lol
What i meant was the tweeter probably has 4 screws under the cover so flipping it 180 = logo being right way. It would not change any positioning.