Hey guys, new member to your forums, I hope I posted in the right section

I own the Fiio FH5, and though the sound quality is stellar, Fiio’s cable has disappointed me slightly.

I own two OEM cables, and on the first and older one, the MMCX plastic housing straight up shattered around the left port. This was under normal use, never dropped them, stepped on them or hit them with anything, so I suppose the plastic used for the MMCX plug housing is just brittle.

The second and newer cable is OK so far, and while it was nice and soft when I bought it a few months ago, it all of a sudden hardened as if it was made of plastic, not rubber mesh (or TPU whatever it is). Every individual wire that leads to each earpiece (after the splitter) now feels so stiff, as it would almost be able to hold the weight of each headphone. I suppose the problem here is that the TPU they used for newer or more recent cables is different from the one used on older ones, as I never had this problem with the older cable. The problem with it hardening is that it increased microphonics considerably, because the noise from every tap of the cable travels better to the earpiece housing, not to mention mobility sucks.

I noticed in one of Z’s recent reviews, that this cable was recommended, and seems to be a great deal, however, I have a couple of questions for some of you who might use it:

• On Amazon, someone mentioned that the cable has microphonics, however, someone else states the opposite in a different review. I suppose this is subjective, but has anyone noticed this to be a problem? I should mention that I’ve purchased an aftermarket cable a while ago for my Sennheiser IE80, and while it looked silvery and shiny, it turned out being extremely stiff and had horrible microphonics, to the point where it was unusable if you moved even slightly, so I am now hyper-aware of this issue.
• The MMCX connector version of this cable appears to have straight connector plugs, whereas the connector plugs on the OEM Fiio cable are slightly curved to “lead” the cable towards the back of the ear. I was wondering if anyone used the MMCX version with the Fiio FH5, or FA1, or FH7 headphones, to know if that kind of wire plug shape would work well (comfort/fit-wise) with the headphone shape/housing?

Thank you guys, looking forward to hearing your thoughts!

I just ordered a 2 pin 4.4 mm version of this cable, so I’ll report back when I get it. Microphonics can depend on the way that the iem was designed as well, so that might be why there are contradicting reviews. Don’t own any of the fiio’s though

Thank you, that would be appreciated

Just got it and its pretty nice. Very nice feeling with essentially no microphonics, although I did shatter that slider because I didn’t want it on there. Otherwise confirmed it is in fact a balanced cable. No comfort issues to speak of. The loop does go around my ear just fine

Thank you for the follow up, I appreciate the detailed info

This cable is even better. Super soft and flexible with a smoother 16 wire weave. Also comes in brown and black, 0.75 two pin, 0.78 two pin, and 2.5 and 4.4 balanced. And no microphonics on the tin T2 and P1 at least. I doubt it would be a problem on any IEM since it’s so flexible, soft, and smooth. 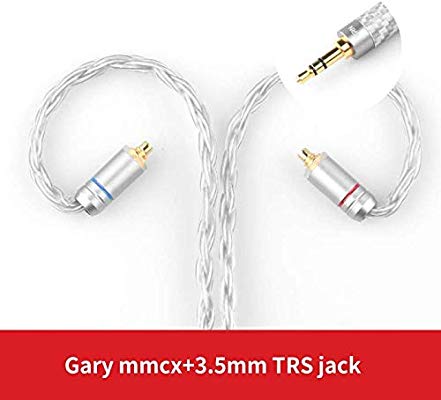 I have bought this specific cable before a couple spares in fact - mmcx & 2pin 0.78.

They are indeed a very nice cable, no microphonics, but I have one issue with them - the heat shrinking around the ear hooks don’t seem to be done very well. For me they aligned weirdly and twisted outwards of my ears so they end up pushing my iems out. I managed to fix the issue though by using a hair dryer and reshaping the thing.

The cable I got has the ear hooks being rather tight. But for $20 you can’t really complain. Especially with both balanced options being the same price as 3.5mm.

I just cut off the plastic shrink by carefully using an exacto knife, it works but you have to be careful (if that’s what you are talking about)

Just did this to mine. Actually a great fix.

Yeah, I just don’t like the plastic wrap up there, makes it so it doesn’t properly rest on my ear

Hello i have the Fiio Fh5 work whery gut with the stock cable 3.5 jack.
I have a earstudio es100 with balance output.
I have a balance cable 2.5 when i use this cable the sound is not balanced on the left is whery silent, on the right is normal.
Bat if i use this cable with my old shure se215 work fine.
I not understand