They’re big players at the entry level, we keep seeing them in the hands of reviewers from time to time. But what about their high end?

I myself was a little set back by the surprise that they’re actually doing high end because i’m so used to seeing them at the entry level, like, what, Little Dot???

I was intrigued because they had made an economy version of their ultra high end 4000usd amp, the LD A1 but for only a fraction of the price at 1500usd, the LD A2, they say it shares the same circuit board but removed both the DAC portion and the Lundahl transformer, without being an engineer or just familiar with components in general this seems like a pretty huge price drop for very little change. 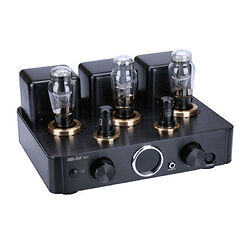 Been thinking of getting into tube amps for the very first time lately and the thought that this may be trickled down 4000usd kind of audio is a rather exciting prospect. Does any of you have any experience with Little Dot’s high end offerings?

id love to hear what you guys think about it!

Hello,
In principle, there is nothing to be said against it.
The important thing is that you must now look at tube amp before buying that there are tubes for it.
There gint only a handful of manufacturers still which reproduce which, but still have somihre problems.
Some, however, are very good.
In the Nos market must necessarily pay attention.
If tubes become rarer, the prices rise, even for not too good tubes.
This is somewhere a mess, which I just experience with the Feliks Euforia.
There are 6SN7 tubes for the and are also good, but for the second version 6AS7G mainly scrap tubes that do not justify the price.

Therefore, look on the market before you even think about buying a tube amp.
Familiarize yourself with the tube family so that you know what you can still use.
And compare the market from the price and selection.
If all this remains in the affordable framework, you can also buy the amp and the tubes.

There is nothing wrong with my Little Dot 1+, I like it, never ready to have bought it.

I was thinking the exact same thing when I was researching my little cheapie (LD MKIII).
I am very impressed with my new purchase and have no urge to buy any more amps in the near future. However if (when?) I get the itch I will certainly look at going higher up the LD chain.
I had never even heard of most of their amps before.

Have you looked around for any reviews?

Transformers have as much, possibly more impact on the sound than every other component in transformer coupled amp.
So “JUST” removing the ludahl transformers could be a big difference. I note they don’t specify what they replaced them with.

Also I don’t think Lundahl transformers would justify the $4000 price tag unless they are custom wound, they just aren’t that expensive (unlike audionote transformers).

The input tubes are only available NOS but seem to be cheap and plentiful.
Lots of companies make 2A3’s and 5U4’s, a pair of 2A3’s goes from $100 for low end new production (what’s in the amp) to $600+ for decent new production, to $1000’s for the best NOS and new production.

man, it’s tough even finding a mention of them, let alone a review

Thanks a ton for your insight, really helps out when someone more knowledgeable can nudge you along!

I thought it was odd too that they did not specify what they replaced the Lundahl piece with, i asked them and i’m currently awaiting a reply

Thanks! I’ll take that with me! I just learned there are lifespans for them which was an weird realisation for me

thats what they replaced the Lundahl transfromer with. is this good?