Might be the most informative and detailed product page I’ve ever seen, and indeed looks quite cool. Fully discrete R2R and FPGA, looks like?

They go into a lot of detail, then leave their voltage reference as a black box

And they left out the option of changing the input voltage to the R2R ladder for volume control or I don’t understand this graphic correctly: 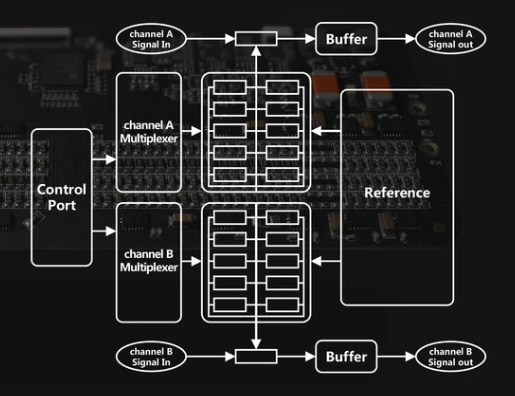 So with the school of thought being R2R needs to time warm up and should be kept on all the time, doesn’t this negate the purpose of portability?

I was wondering the same thing lol. IDK since the ladder is so close to other hot components and smaller resistor size might make it warm up faster? I wonder how bad the battery drain would be on it

Good point. Lol re battery, could be why they added the caveats “in case of single-end output of non-high bit rate files played at normal volume when the screen is off” in the battery life section.

So I get to try one of these soon, although it’s actually the even more beefy Ti version so I’m pretty excited to see what they have done

Welp I just had to buy one to try one, oh well lol. Anyways, it’s pretty huge lol, like big for a dap, not quite like a micro bl or hugo 2 but it is sizable for sure. Also non touch is kinda strange but honestly once I learn to navigate it more quickly I might like it more. So initially I had issues with my sd card, but swapping down to a 512gb card seemed to fix the issue (also I found out there is a cap for 12k tracks and 512 gb sd card which is a bit let down, but I hear this will be increased later). First thing I did was plug in some iems and almost blast my ears out lol, the volume must be pretty exponential because it just hits a point and takes massive jump in volume. Set it to nos mode of course and initially it’s actually rather neutral and forward, not what I was expecting, although as I listen to it this is changing more than I would expect. Some things that jump out to me are the dynamics, spatial recreation and layering, and also constantly improving timbre. Treble also seems kinda meh but it does seem to be getting better. Really can’t say anything on sound yet since it just keeps on changing lol

Edit: this thing gets pretty warm

More hours in and this thing has started to open up almost, it has gotten pretty dang neutral but very organic at the same time, and it’s still changing lol, I have a feeling that there might be a pretty long burn in ahead. Now the treble is really opening up a fair bit, and bass and midrange is getting really good texture and impact, a ton of body. Now it’s almost like a neutral slightly warmer sound with excellent depth, separation, layering, and also very good dynamics and impact that just feels right where initially it felt a bit more soft and not as far reaching bass and treble. Super void background, extremely silent and really great, no hiss even with stuff like the sarda. This right now is pretty easily outperforming my lotoo paw gold 2017 and qp2r right away from memory, but I won’t do any real comparisons until the burn in period ends

What is the power on the amp section like? Like can it drive harder to push headphones or is this like something you shouldn’t put something like a Harder planar or high ohm headphone on?

Only tried iems on it so far, will try out headphones later, but from the looks of it it’s not super powerful but we shall see

So swapping on some headphones, and admittedly it doesn’t really have as much drive and control, trying with stuff like the diana v2 or aeon 2 closed (stuff that I might take portable) and it really isn’t as good of an experience, this is really mainly for iems here

That’s too bad. I have trouble with IEMs (fit, ear pain etc) so headphones are more my tempo. Still, very cool dac.

They make a larger dap like the lp6ti or other lp dacs that are more suited for headphones, but they are a fair bit more expensive

Just looked it up. Wow that’s a lot for a DAP

Yeah lol, if you wanted to drive headphones you would honestly be better off with a hugo 2 or other daps that are more suitable, but they prob wouldn’t be r2r

Aah but it does come with a “free” leather case lol.

Wow continuing to leave it on it continues to change and impress lol, it’s honestly been getting more transparent sounding and organic at the same time, overall it seems the general sonic character is a bit more warmer bodied but it’s still a fairly neutral sounding player. This is easily the best spatial recreation and natural presentation I have heard on a dap, and honestly might compete with some dedicated desktop dacs like an ares ii or holo cyan, but I have to line out to other amps first to confirm, but man this thing just keeps on delivering. Still gotta get used to that volume though lol