First thanks to @joshua_g for finding these. I took a leap and bought them.

Build: The right speaker with the amp in it is hefty, even the left speaker is pretty hefty for being devoid of electronics.

Connections: On the back is the A/C power cord, about 6ft, is attached. Input has RCA and banana plugs maybe? I’m not familiar with them, and standard speaker out to the left speaker, the power switch and the port for the woofer. On the front of the right speaker is the volume knob with a satisfying click to turn them on and off with a small unobtrusive power light next to it. Also is and Aux input and headphone out via 3.5mm jack.

I have them connected via RCA to my new iFi Zen DAC V2 set to variable and the volume knob at 50% with the speakers set to 50% as well. I control individual applications volume using an external audio deck.

The first thing I listened to was the 1812 Overture via Apple Music at 256kb using a program called Cider for Windows. It uses the Apple API’s to mimic the Apple Music program on a Windows PC so you don’t’ have to use iTunes to listen. As you can see from this pic 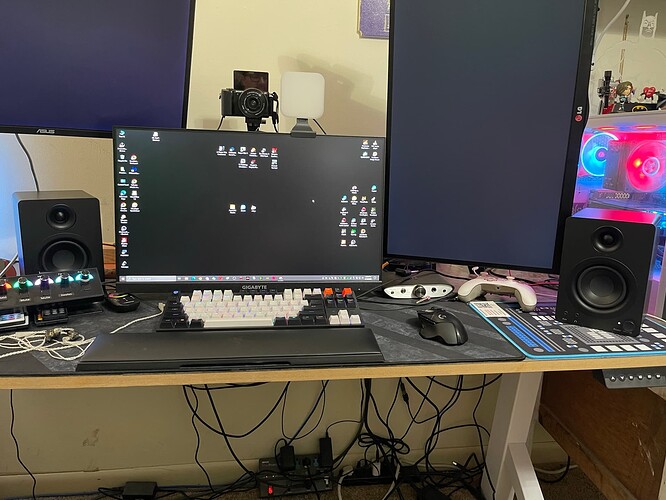 IMG_21211920×1440 209 KB
proper positioning isn’t a thing yet, I gotta figure that out. The overture was … muddy. the bass rolls just kinda rolled into each other. They are ported out of the rear, so I have open air behind the left speaker while the right one is firing into the side of my glass pc side panel, not the best of listening options for acoustics. So I did what I used to do as a kid, I covered the ports with my hands and it sounded MUCH better. Interesting. On to the Darth Vader March theme song. It seemed kinda far away sonically, so I turned on the PowerMatch on the iFi and that brought it to life more. The bass was clearer and not as muddled as the Overture, but the bass drums also aren’t rolling constantly like in the Overture either. In the upper range, turning on the PowerMatch made a huge difference. The tweeters are lively and sharp and I didn’t notice any distortion on either song.
Song 3 I went back to my 20’s when everyone wanted a slammed S10 with 15’s in the bed and 1000watts of bass amperage

I loaded up Techmaster PEB “Bass Computer 2000” album and let it rip. Gotta say, they have a surprisingly good low-end mark. Again, not the best positioning for them where they are. The highs were sharp and clear, the lows were individual and pronounced. Deep and throaty. Again, I covered the ports and the bass notes sounded much more distinct. I’m starting to notice a trend.
Further musical testing was some Shinedown, Fleetwood Mac, the Halo theme song and others. It handled everything very well. I am extremely surprised for a small $79/pair set of speakers from Monoprice. Also, I got up and moved around my room and this oddly made them sound alot clearer.

To recap, plug the ports and it sounds better

If anyone has suggestions on positioning considering the current desk setup, please speak up.

I’m not a writer and don’t pretend to be, so I apologize for the horribly formatted wall of text.

Granted, the more I listen to them, the more I might find things I dislike. Like right now I’m listening to Volbeat - Lola Montez and the guitars seem more distorted than they should be and maybe this just needs some EQ work. I will do some gaming on them and see what they sound like.

And the more I play with it and listen, I’m definitely getting distortion from the sound going out the rear ports and just bouncing around on the wall, the monitors and my pc case. I put a sock in each port(yeh I know not terribly acoustically sound) but it helped some. Maybe sound panels behind the desk is in order, I should do that anyway due to streaming and YouTube recording.

i have port plugs in my kef q150’s. they just sound muddy no matter where i place them otherwise. not all ports are great.

hopefully some break in will help as well.

The ports are maybe 1.5" across, which should be fine for the box size. But I got a few days to play around with it and see if I want to return them and try the Mackies or the Presonus ones.

you can try throwing some folded up hand towels under them to act as temporary isolation pads. see if that helps any.

edit: and as far as placement, you got them about the only place you can without shifting things.

not all drivers like being ported. there are many drivers that sound better over all without a port. even if that means some low end extension.

I am planning on moving the pc to the left side of the desk, that will open up air space behind the right monitor, just gotta find time to do it.