Need help with planning a setup!

I am new to hifi as well as HifiGuides (pls dont judge me XD). I really love listening to music and wanted to try hifi. I have started my journey with the koss kph 30i and ifi Zen dac. I couldnt believe how much the music listening experience improved!

A little note about me is that I plan a lot, and I mean a lot, in advance.

So I decided to watch some reviews and have made up a plan on how to achieve my “dream” setup. This would involve buying certain things along the way and upgrading them from time to time. The plan will ofcourse change from time to time.

However this set up wont be just for music, it’ll be for watching movies, youtube and even playing games. 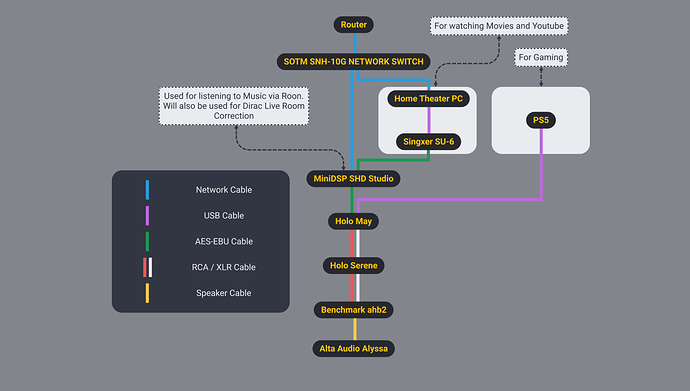 I had a couple of doubts about firstly, whether this gear would be compatible and work well with each other and secondly, whether watching videos, movies and playing games would have some delay between the video and audio.

Would be really appreaciated if someone can help me with this.

So right off the bat, I wouldn’t look this far ahead. While it’s a good idea to plan ahead, you don’t really want to jump multiple tiers at once without any experience into the step before. You really want to hone in your preferences, develop your listening skills, and also take things somewhat slowly to get the most out of this hobby imo. It’s fine to bypass a tier once in awhile, but I wouldn’t plan on making this drastic of a jump without having experienced stuff at least in the 1k+ range.

To comment on that actual setup though, it looks nice, some changes I might make would be to use optical on the PS5 (if it still has it I don’t recall, or get a driverless DDC for it) to isolate it from potentially injecting noise into the system, typically I wouldn’t suggest optical for best sound but since it’s not your main source here I don’t think it would matter as much. For least amount of delay make sure it goes directly into the may and not run through the minidsp. (you also might have to disable the internal PLL but I don’t remember needing to do that for the casual gaming I briefly did when I had mine)

I do think the holo stuff is best fed via a nice usb source like a streamer + usb relocker but since you want to use the minidsp for room correction it won’t be an option, but it shouldn’t be all that problematic either since the holos have a good internal PLL. I don’t think latency would be too bad here for movie watching so you should be good, but I’ve not tried a may + minidsp + su6 all in one chain together, as separates, but you should be fine I think for movies. If it doesn’t work out you can always remove the su6 from the chain and just go into the minidsp via USB (I think) or just add an offset in the movie playing software (typically a feature)

Not heard the serene so I can’t comment there

For the benchmark, I personally don’t think that amp is worth it’s salt but some enjoy it, but I’ve not heard the altas so it could be a magic pairing for all I know (but I’d be skeptical lol)

But I still wouldn’t suggest sticking to a setup like this blindly as a future goal, as you get more experience your tastes and preferences will further develop and you might find yourself better suited to a different setup, no real way of knowing beforehand, there’s lots of great stuff out there especially at this price point so I wouldn’t try and lock yourself to a specific “endgame” setup until you are absolutely confident it’s what you’d be after (which is something you can really only tell from experience)