I’m looking for something to upgrade to from a FiiO K3, above all else I’m looking for clarity and neutrality, I also want something with a balanced out that also is fine for using low impedance headphones(so solid state). I was thinking of perhaps the Jotunheim with 4490 dac, B-stock for $419. Is this a good choice?

The new topping a30 pro is basically an a90 with slightly less power and lower noise floor. If you’re not using incredibly hard drive headphones it’s probably the cleanest most neutral amp out there. I don’t really consider the jot 2 to be that neutral and personally hated it (I know lots of people love it, but I didn’t). I do think the price is a little high on the a30pro but if it’s anywhere close to an a90 and you don’t need a90 power I guarantee you’re not going to be disappointed.

What about the a50s? It’s quite a bit cheaper, and 3.5W per channel will work fine for what I am wanting to use it for.

A30pro has balanced in and after going full balanced I will never go back. Also everytime you try to save $100 in this hobby you end up losing $100 after you get a taste for the good stuff and upgrade and lose money selling your old stuff. The a30pro spec wise is basically endgame neutral for 99% of headphones. If you’re patient you might be able to pick one up used soon or on a sale.

Actually i don’t think that the new a30 pro is a fully balanced, it seems a single endend circuit with a fake balanced output, better check it first if you’re looking for a fully balanced amp.

789 wasn’t true balanced either but it pulled it off plenty well i think. my biggest gripe with the 789 was the noise floor but doing an a/b with balanced/unbalanced in to balanced out on the 789 was definitely noticeably better on balanced in. idk what kind of trickery they do to make it work, but it worked there and i have no doubt topping can do it too. if i can find the a30pro on amazon soon i’ll give it a try but i have faith its really really good.

edit: now that i think about it, the a30pro is basically a direct replacement for the 789. its really close to the same power and with a90 levels of cleaner sound so just better. close to the same msrp too (though we all know how cheap the 789 can get sometimes)

edit 2: yeah, 0.1 ohm output impedance so its just gonna be amazing for everything i think. forgot it had a ground loop switch too. thats a ton of features.

I never checked the 789 'cause I’m in europe but now I was watching the specs and the pcb and is fully balanced, 100%. About the sound signature of the topping 30 series I personally will wait some review and feedback 'cause they are pretty different compared to the 50 and 90 in terms of topology, the a30pro and d30pro may sound very different compared to the others topping products. Low output impedance is not alway the best think.

i dont have the slightest clue how to look at pcbs and know so thats my fault. but i was thinking the low output impedance means iem friendly and good for a huge majority of headphones out there. sure theres lots that wont like it but impedance adapters exist to fix that problem and those only work one way, so you can never go lower than the amp outputs.

If you want dead neutral, I’d just go for a Magnius (not that I think that is the funnest choice).

I found it a bit dry compared to the Magnius.

THX amps in general are not neutral. They sharp. The elevation in treble is easily audible.

But isn’t the 789 supposed to be basically a wire with a volume knob and be one of the most neutral amps out there?

Yeah, I thought the whole “gimmick” of THX was that they were dead neutral and had like 0 crosstalk of output impedance. I just ignored the comment tbh, it came across as extremely subjective. I’m guessing they’re used to a less neutral sound with less treble and hearing the 789 at neutral treble was too hot for them. Idk, I’m used to something pretty neutral so I don’t think I’d be able to relate to that specific experience.

You can compare Topping DX7 and SP200 (THX). I’m not the only one saying THX is not neutral. “Wire with gain” is just what Drop says.

I can search for more comments on THX but I’m too lazy. I just wanted to point something out that many people heard, even though the measurements don’t say anything about it.

Yeah, the Topping’s usually claim to be pretty Neutral.

According to the specs, the A90 is more linear than the 789 with most configurations. Better SNR, and in turn, more than likely better Dynamic Range. And of course significantly more power. The frequency response range is really the only thing that’s actually debatable. I think I’ll definitely put the A90 on my things to get list rather than the 789. Plus, I like how Topping gives you their full comprehensive specs. 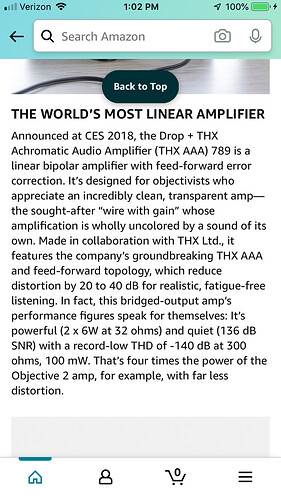 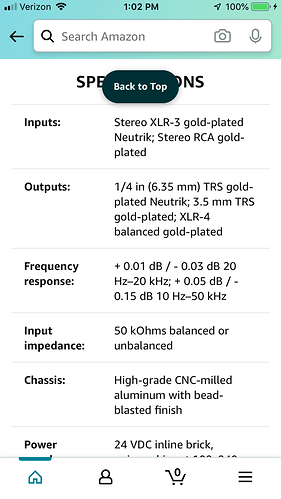