Newbie wants to upgrade and begin his journey

Hi all,
I was casually searching for a good sound system and stumbled uppon Z Reviews channel. After many videos…, it was his addcition that got me into the rabbithole.
Now I changed the game a little bit.
I just built a new PC and will upgrade my very old sound system, as long as you would call it so. This will be done in two steps.
First the headphones and later the system itself.
The old system I am using is the Logitech Z3e… This will be exchanged to Adam T5Vs.
The hp is for everything. My whole entertainment system is my pc. Listen to music, watch movies and play games.
For the hp I don’t mind using a AMP/DAC combo, i need one anyway for the t5vs. It would be nice if I could combine that point.
I don’t have a specific budget to go for but as a total noob I think spending to much is just a waste of money to start with.
The only good gear I have right now and I am used to is the Koss Porta Pro. Bought them 20 years ago. I like how they sound, so a hp in this direction would not be bad but any kind of stepup is my goal here.
There is a little problem, it’s quite hard to get gear from Drop here in Germany or you have to pay way to much to get it over here.
Any kind of help would be really nice.

Edit: To narrow it a little bit down a hp with detachable cable would be nice but is not a must, mainly used for music. Comfort is very important here, they should be over the ears. I have a small head and relative small ears. Bluetooth could be a feature as long as the sound quality is good. In this case you cant buy the pandas here in Germany.
It should be capable for gaming too. I mean for fps shooters on a casual level.
For the budget, there is no exact limit. If the best of the best is the gl2000 and everyone is just saying buy them, I would go for them. But I am used to my porta pros and I am just asking for a good or even much better upgrade for them and i don’t see a use for a complete overkill hp.
The speakers are just right now in my mind. Nothing fixed jet. So in general I am looking here for a complete system and i will start with the headphones.

Hope this helps bit more with my question.

What about the Beyerdynamic DT 1990 Pro? Would this just be a complete overkill as an upgrade to the Porta Pros? Is there a cheaper option to consider? What do I need to power the DT 1990 Pro?

. For the needed DAC is there one that can power 2 T5Vs studio monitors balanced aswell? (Sub from adam will be addet much later, if the bass is needed)

Well the T5V’s are indeed a great choice (I run them on my sim rig) and yes they are connected by XLR but that is not really balanced per say. They can be connected via RCA or Trs 1/4. I do recommend a sub as they are of course only 5inch but you may find that just right.

What kind of DAC are you using for your T5V’s or what would you recommend for them?

On that particular system I have a Schiit Jotunheim multibit…

I looked it up and sadly didn’t find a seller here in Germany…
The monitors will be bought later this year, so I do have mutch time to inform me later about them.
But my main question here is what headphone should i get

?
After looking into some more reviews about the DT 1990 Pro I think it will be just a litle bit to much for the start…

What about the Beyerdynamic DT 1990 Pro?

Since you’re in Germany beyerdynamic, Sennheiser plus the near-by AKG and Philips seem like obvious choices. Jumping straight to one of beyerdynamic’s premium models seems a bit of a gamble. For example, the DT 1770, Amiron Home and T1 all share the same basic design, superb build quality and comfort. But they also have very different sound signatures. Being familiar with the Porta Pros is a good start. But to triangulate on the best sound for you, you need more than one reference point.

If you’re comfortable buying, using, than re-selling a better strategy would be to try some other great budget performers like the other Koss models, the Creative Aurivana Live, the Philips SHP-9500 and X2HR.

It is expensive (and likely out of stock):

My Main system has a Schiit Bifrost 2, Asgard 3 and Monoprice liquid Platinum, Totally different then that one… As for a headphone it would depend on the sound you are looking for… This hobby is a rabbit hole and can if allowed bleed your wallet dry quickly… Start with something inexpensive and work from there.
Do you have access to Amazon? They have a excellent return option if you don’t like something however make sure you do not abuse that policy… Also check out the used market… I have purchased many of my headphones used and they were either new never sold or VERY lightly used.

EDIT: if you can do Amazon then I would probably say the IFI zen dac/amp all in one. and maybe a Hifiman Sundara?

Oh wow, didn’t expect that it was so much…
Will look for an cheaper one to start witch.
Amazon is not a problem here as well as good hifi seller in Germany. Just Drop makes here some problems with the costs to get the product over.
So i get the point to try a lot of things and exchange them to get a feeling for it.
Lets begin the journey

Dont worry about that, I will maybe just start to collect them. This will cost alot of time but this is the way

.
Still looking for the startpoint, Hifiman are here in germany at about 350€.
So they could just be a start. Let’s dive into more reviews

.
On the other hand it would be better to buy the DAC first I guess. Is there a relative cheap DAC to use for alot of headphones or am i here asking in the wrong category? A balanced output would be nice and maybe the possibility to put the T5Vs into it aswell

Balanced Dac / amp is probably gonna be in the 500 plus range… Since I am in the states it is kind of hard but you could look into choices of Lake People / Violectric or Topping… I do not recommend any of the the THX amps unless that is the sound that you are after.

It would be so nice to get the ModHouse Argons here…
As mentioned from MaynardGK the only sound i am used to is the Porta Pro through a 3.5 on my pc. So i don’t know now what i am looking for. I have to try more and more.
To have the option to experience the balanced part is something i am after. I just want to know if this is something I like or not.
If I get the DAC do i really need an AMP at the start too or is the DAC able to power a majority of headphones?

So a DAC does not have the power to produce sound in a set of headphones. So you will either need an all in one unit or get a stack. Source>DAC>amp>headphones/speakers

Man I can’t help but suggest a Grado SR 80 with Geekria pads and a Beyer headband. All in I think less than $115. Guys are right, start slow and inexpensive so you find your sound. I started at Koss as well. 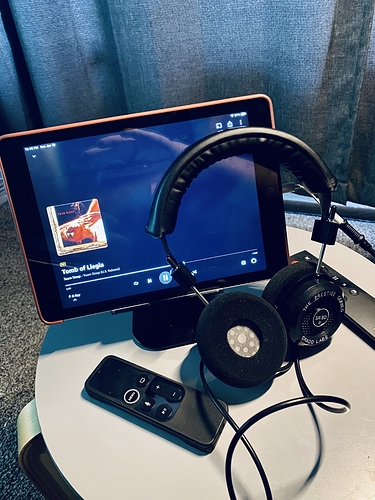 I would still try, of course buy from somewhere with a return policy, I think Amazon sells them. Pad swap is a must, headband is for comfort cuz the headband is shite. I’m on an Apple dongle into an iPad now and no complaints.

If you end up wanting to go down the cheaper grado route, the sr80e can be had on Amazon uk in like new condition for £75

. This could start to improve the experience aswell. Found a decent low cost DAC/AMP to play with around.
iFi Zen DAC and lets just lock for the right hp. For 149€ it’s okay to play around with.