Oculus quest yes or no?

Hey guys ima be getting a quest soon! And I’m so excited. Do any of u already have one? Do u like it? What games should I try?

I have one and it’s pretty great. The tetherless setup makes a massive difference over the PSVR, Vive, or Rift, even if they may technically be more competent. I’m a little sensitive to motion sickness, so I don’t play for long stretches when it comes to the more motion based games like Robo Recall. Beat Saber is the obvious recommendation, and I also like Thumper for a music rhythm game even though it gets too difficult for me after a certain point. It’s not much of a game, but Richie’s Plank Experience is good to have to show it off. Sports Scramble, Moss, Superhot, I Expect You to Die and Job Simulator are all pretty good, and Accounting + is one of the funniest games I ever played, but it doesn’t last too long. I hope you enjoy it!

Ima pick it up friday and I’m so ready for beat saber!!! I wrote all those down and will be making my way to them. Thanks! I’ve been nervous about spending that much on a vr headset but I feel like it’s the right time.

Also how is the 3d painting app on it?

I’m not very artistic, but it seems cool. You can load other people’s art and watch how they did it from start to finish all while changing views and moving around in the virtual space. I’m referring to the google Tilt Brush app. I believe Oculus has their own app also, but I didn’t check it out.

All in all, VR is still finding it’s footing. Most of the game experiences are pretty basic and relatively shallow and I’ve made some wasteful purchases along the way. But it’s still unlike anything you’ve ever seen, so any remorse from being an early adopter gets counterbalanced by the experience. As much as I don’t love Facebook, the fact that they are the ones pushing the tech means it’s not going anywhere anytime soon. They are investing a lot of money into it, and the wireless headset is a huge leap forward in making it more mass appeal. Keep us updated when you get it, I’d love to hear what you think.

Are you stuck in VR? I just downloaded the new Vader episode that came out today and it got me wondering how you were making out with your new toy

Well to be honest I haven’t been able to get to the store to get it lol. I work in a chemical plant and have been working 8days on one off so I haven’t had the energy or time to go get it but I’m getting some off time soon and going to get it lol. When there is overtime to be had gotta soak it up lol.

Good for you. Get that OT! Oculus just announced that there is something coming in November that will let you play desktop Rift games on the Quest as long as you also own a VR-capable PC. That’s big news for me, because the Rift games are a little more advanced but I don’t like being tied to my desktop. Still not sure how it will work, whether its a software update or a physical device, but if you have a decent gaming PC the Quest library essentially will quadruple

That’s cool! I’m guessing it will be kinda like what nvidia has with wireless streaming to the quest. Ether way it will be cool! I did get ahold of a samsung gear vr from a friend and have been watching movies in it lol

Apparently it’s done with just a USB 3 cable from PC to Quest. I was expecting it to be streaming as well

I have a rift S, been really enjoying it, if portability isn’t imperative I’d wait on the vive cosmo tho.

I know this is an older topic, but I just picked up a Quest and am wondering what audio solution y’all are using? The built in audio is passable, but a SLIGHT downgrade from what I usually use to game or generally listen to.

I use the onboard audio. I agree that it’s lacking, but having my girlfriend grab my arm to get my attention because I couldn’t hear her was terrifying.

Haha, fair point. I’ve tried using some Hyper X Clouds, but I don’t like being completely isolated for the exact reason you mention. Any of my IEMs have the same issue and my open back headphones can’t really be driven by the headset.

I also don’t really like having to put on a set of headphones as I find it cumbersome. I really liked the audio setup on my Rift (CV1) and I also like the deluxe audio strap for the Vive. There’s a Frankenquest mod to use the Vive DAS with the Quest, but the DAS costs as much as the Sennheiser HD25 mod I linked above right now on the secondary market since HTC stopped making it.

Have you seen these? I haven’t heard anything about them, or if they work with the Quest, but $250 isn’t obscene: 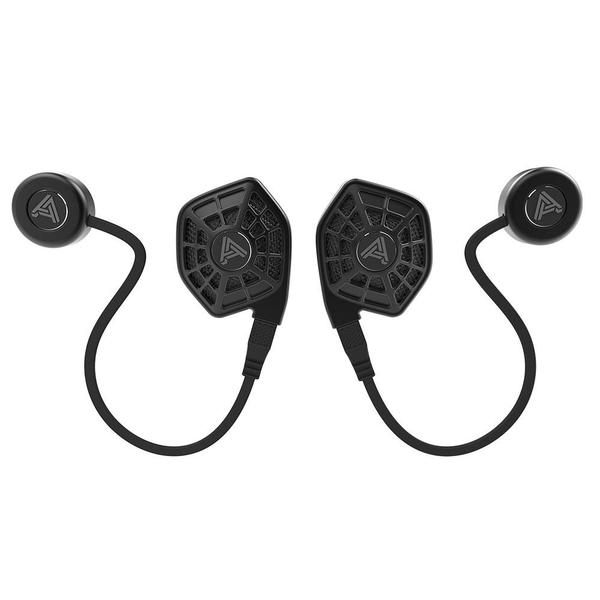 The VR edition is the perfect size to complement your VR headset experience without being difficult to take on or off, or clunky when moving around. The world’s best headphone for Virtual Reality – Audio plays a significant part in the VR experience....