This has happened to me twice now, so I feel like a PSA is worth it.

tl;dr, these things can ruin your experience, make sure they’re not faulty before trying other things.

Got my Sundaras today (fantastic headphones, will post elsewhere about them), and their 1/4" adapter is faulty. This is the second time in a month, last time it was the adapter that came with the DT 770s. 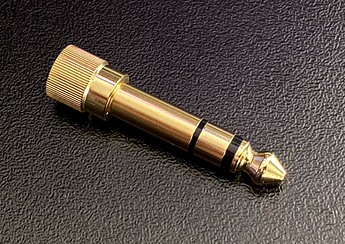 Both times the adapter would end up blending the two channels. Sound-stage would collapse to the center, separation would naturally disappear. With the DT 770s, I actually had to push the adapter hard to the side to get it to work properly. The Sundara adapter works if you rotate the 3.5mm jack a bit.

It’s such a small part of the chain, yet it can make the biggest difference.

If you just bought a new pair of headphones, and you’re using the adapter, and they don’t sound great, or near what you expected them to, make sure to try another adapter. You may be pleasantly surprised.

Welcome to rule #1 of anything that relies on physical links:

another good reason to not buy a no name or the cheapest option. not that you need to spend a bazillion either, but buy accordingly.

another good reason to not buy a no name or the cheapest option.

The problem is bigger, I think, when you’re kind-of a noob and don’t have specific expectations. This was the adapter that was included with each pair. If you’ve never heard that headphone or similar ones before, you might just think that’s how it is.

This happened to me with the DT770. I had no expectations, so initially I just thought that was how they sounded, until I instinctively messed around with the plug a bit, and BAM, wow, the sound became so much better!

Audiocheck.net is a good resource to spend a few minutes with for any new cable, amp, DAC, ect. Just do a few tests. L/R, tonal sweeps, ect. You can adjust your Windows channels as well to mute one side and repeat for any crosstalk.

Since being more technical person.
Usually those adapter are rock solid and internal wiring/connection probably are correct. Never had or seen a actual faulty one.

Mentioned problems otherwise could be invert polarity / channel or channels being connected wrongly.

But the amps/dac headphone output. That is a different story.
Those i have found might start to cause issues and not connect correctly to plug. Like mentioned on first post. Technically not the plugs fault.
Happens more often in household of young kids… plug in hard and not fully straight, plug out hard, plug in hard and so on. Nice little game that has caused damage to output after sometime.
Technically still not the plugs fault.

Or being more common “user error” and using wrong type of plug in gear. Some are more picky than others when using balanced / unbalanced plugs, causing issues.

But still, there might a 1/4 plug that is faulty. It is a possibility still.

I’d accept that the amp is faulty if the experience was repeatable with multiple adapters. But my other adapters work fine

The DT 770 one might have been an incompatibility with the Hel socket, since the adapter did seem to have a very slightly different shape compared to my other adapters. But the Sundara one, you just had to swivel the 3.5mm inside a bit and it’d change how it sounded. Switched it to my other adapter, no problems at all.

Like the 1/4 to 3,5mm adapter that came with my Audeze. It’s absolute shite as the connectivity is wonky and the inner “tube” physically moves upon insertion or removal. You really have to be careful and push it it in properly. The cable is also way too stiff and heavy for most 3,5mm, really makes you wonder how much the gear could take before breaking.

Thankfully I have a pair of Grado 1/4 to 3,5mm. To this day I haven’t found a better adapter than the one that Grado makes. I’m much more pleased with that one adapter and their extension cables than I am with their headphones in general lol.

and the good thing is, if it would break.
You can almost literally have the same one as Generic part or under Sennheiser (Like 12$ or so).

Specially in black colors. Only the look is different.

Luckily the nearby hifi store actually carries Grado extensions and adapters. Not that I think they’d need replacement. They’re nigh indestructible, had them for nearly 20 years now.