OK so I have an odd problem.
I have Sinead O’connor cd that I have copied to a hard drive but the track listing is not only partly in the wrong order but names some tracks that are just not on the album,
I’ve tried renaming them correctly on the hard drive but when my Node 2i re indexes the hard drive it completely ignores the renaming and reinstates the previous erroneous listing … any suggestions as to how I might correct this?

wash the Nodes mouth out with soap for lying!

Did you just rename the file, or have you edited the ID3 tags inside the file?

I just renamed the files.
The ID3 tags don’t show up so not sure how to edit those.
Do need specific software?

Yes, what operating system are you using?

Here is one freeware program that came up, http://id3tageditor.com/

I’m not a Windows user so I can’t vouch for much software on that platform, but take a look at that one, and see what others here recommend. You can also search ID3 tag editor Windows 10 and see what comes up.

But these programs are what you need to correct your album’s information so they’ll index in accordance with your expectations.

Cheers.
It kinda worked but it’s now indexing duplicates and not all corrected ones…I’ve disconnected the shared drive and reconnected and then re indexed again but still getting duplicates…this just might be a Node 2i issue. 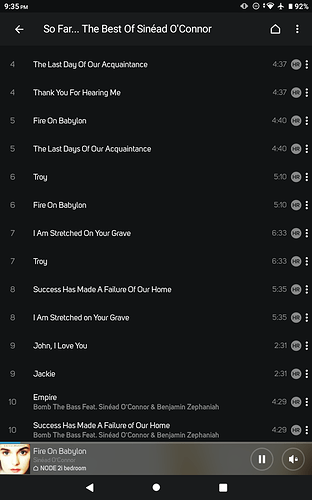 If you open your album up in a different program, like Windows Media Player, VLC or something, does it display correctly?

Yes it does…gonna clear the cache and storage from the Bluos app and reindex . Let’s see if that solves it.

No. It was very odd behaviour.
Windows media read it correctly on the laptop but if i copied it to the hard drive media player read a load of duplicates and incorrect track names despite having deleted it off the HD before copying it back over.
I have managed to sort it out though im not sure quite what i did that solved it