Anyone else here into rhythm games?

At the moment I’m playing Intralism since @Shiivu recommended it. I’ll do a brief review of that later.

My all time favorite game series remains Guitar hero. Today the series lives on as fan made version of the game called Clone Hero. My number 2 favorites are the Hatsune Miku series on PS4. Aside from that I’ve played on PS4: DJMax Respect, Taiko no Tatsujin (that drum game), and Superbeat Xonic. When I was in college, I used to be really into Dynamix, Cytus, and Deemo on Android.

Yeah I also love Clone hero tho i play with a keyboard so im not all that good at it.
But I also really enjoy intralism very different rythme games that can both be very difficult in their own regards. You will have to tell me how u like Intralism, Maybe play with me sometime. I love how many songs there is for both games, Clone hero quite hard to get into due to the setup can be tedius if u dont have a guitar. And the maps can take up huge storage haha. But is very fun, wish i knew how to setup online for it.

I’m guessing you never played GH on console? I would recommended trying CH on controller. But those aren’t so easy to come by these days. If it was a one time purchase, I’d say it’d be worth spending the $80 for one. But those things aren’t made to last lol. The thing I hate most about rhythm games is dealing with nonstandard controllers lol. In the past 12 years, I must have spent like a $1000 on controllers for the various RB/GH games. I hadn’t tried it’s online mode yet. But yeah apparently you have to deal with port forwarding and what not. Let me know if you want to try that with me
Tutorial: https://youtu.be/B14jpvfECHw

For the price, Intralism has a great number of good songs. But I’m not a fan of the weird centered track design lol. Maybe it won’t bother me if I get good at the game.

I have played GH, Rockband ect. Had the wii version of it still got some controllers but cba paying the money for the adapters haha. Loved the games was so much fun. Played the PS3 version with drums and shit thats also loads of fun.
Plus if u wanna play with me on intralism hit me up im down. Im currently trying to learn to play with 4 fingers 2 hands in a different keyboard layout but atm im simply better with 3 fingers on 1 hand. lol but if i really wanna get competative 2 hands is best.

Also I doubt it will bother you as u get good at the game I can send u some settings that make the game feel alot smoother if you want?

Once I get good enough, I will join you. I actually set mine up to work with controller. So I’m using two thumbs only lol. What settings are you referring to? The game seems to run pretty smooth already.

Oh haha i was using arrows but moved to , (left) . (right) and l (down) o (up)
Yeah here arc destroy delay turn that shite off. As what it does is when u hit an ark it delays its disppearence and its stupid it will help once u get rid.
But im change L and O to K and I

Been playing a lot of Muse Dash lately. Fun game with a lot of Japanese and Chinese Music in it. Super cheap as base game, but around 20-30 bucks with the full DLC that has some 100-200 songs by now and continuously adding more with each patch.

Recently bought Musynx at the Steam summer sale, but haven’t gotten that attached to it, will see if it clicks as much as Muse Dash did, but it was only 3€ so whatever

Been interested in Deemo on Switch too, will probably grab it during some sale.

I had forgot about Muse Dash. I didn’t realize you actually got that much with the DLC. I had stopped playing it partially because I wasn’t that into its music. I may have to revisit it later now.

I went ahead and bought Musynx since it looks like it’s a more traditional style rhythm game.

What page are u up to on official maps so i round about know how good you are haha.

I’ve been playing random songs (not very well) at around a level 9-10 difficulty. Keep in mind I’ve only have less than a couple hours total playtime lol

Rhythm games are awesome. I used to play GH and made a few charts back in the ‘burn custom GH3 song lists to DVD’ days. I play Osu every now and then, but most of the time I play Hatsune Miku: Project DIVA Future/Colorful Tone on Ps4. 200+ songs and that sweet 60 frame goodness.

Recently saw a game called Project Heartbeat on steam. Seems like a clone hero for Miku. Going to keep my eyes on it for sure.

Heyyyyy, another Future Tone player. Did you see the that the new DLC came out recently? My favorite song from it is ‘Jigsaw Puzzle’

I just looked into in Project Heartbeat. I really hope it becomes successful. Right now it’s being developed by a single 20 year dude from Spain. So unlike an opensource project like Clone Hero, it’s future is on shaky ground.

PPD was another fan made game for the series. But it’s janky as hell and I don’t think it’s being actively developed. It also doesn’t have built in controller support. The one thing it’s got going for it is it’s existing song library.

Oh shit! I didn’t actually know they released another DLC for it. I admittedly have been away from my PS4 for bit in current year. I will have to check it out though. I’m glad they are still adding songs. It’s really going to make the next version of the game they make work hard.

Yeah, my fingers are crossed for it. It would be nice to have an open-source project like CH, but till that happens I can only send my energy to the dude in Spain.

I actually haven’t heard about that one. No controller support seems a bit rough though. My Gen 1 ps4 controllers are finally dying though so maybe it a sign.

Woohoo! New Future Tone DLC is out. New songs are Greenlights Serenade, Bless Your Breath, Bring it On, and Dramaturgy.
The DLC is $10 but I’d say it’s worth it since they’re all great songs.

DLC pack is finally on sale again, so I’m gonna nab it. Been playing the basic version for 2 year lol.

Good headphones = better play. Used to play with freebie Samsung earbuds, but now (well, not now but once I get my replacement) I can hear everthing I ever want with the ESP/95X. I hope Drop ships my replacement soon lol.

On another note, I miss playing DDR and SDVX at the arcade… Haven’t gone since the start of COVID.

I’ve played Muse Dash but I quit since I wasn’t into the music. The two games plays I still play now are Clone Hero and Future Tone. If I were you, I’d look into getting a high quality home DDR setup. Though I imagine it’d be pretty expensive.

But honestly, I should do that one day, if I ever will have the income to support my hobbies.

There’s a big sale on steam for DJMAX RESPECT V that ends shortly. I own it on PS4 already, but the content prices are so much better I went ahead and got it again with most of the DLC

Someone animated a montage of a bunch of rhythm games. 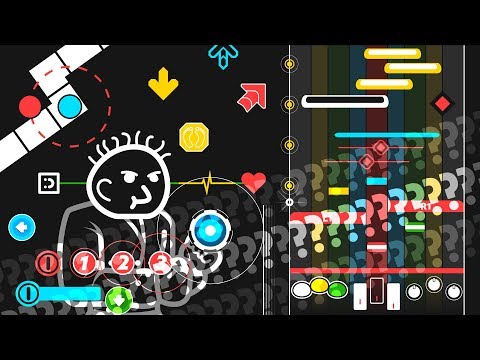 I recognized like 60% of them. I’ll have to check some check some of them out