I’m hearing crazy distortion on this track on Amazon music. I checked on youtube and the distortion isn’t there. Can someone listen to this on Amazon and let me know if you hear the distortion? It starts coming in strong around the 1 minute mark.
https://music.amazon.com/albums/B07XKWSQS3?trackAsin=B07XPJ5ZY5&ref=dm_sh_ef49-e32d-1fc8-78f7-d6d8f

I know…it’s a bummer. When I heard that voice I stopped what I was doing to listen, and then that nonsense started

Since Dave’s question has been answered, mind if I derail the thread slightly?

I’m having an issue with Amazon Music also. When I load my music library (my flac files on my hard drive, not my Amazon cloud library) none of my album art shows up. Every other music player I’ve used automatically finds the image files in the album folders, but Amazon is ignoring them entirely. Anyone else encounter this issue? 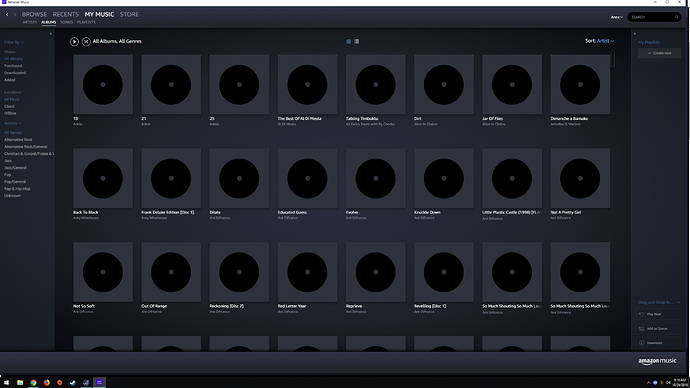 I think we’re all participants in an open alpha… That’s what it feels like anyway. I see the same thing when I view either artists or albums

OK, thanks Dave. I just wanted to make sure I wasn’t missing something.

The app is extremely un-customizable. I really like the app layout though, and the service is a no-brainer for Prime members. I’m going to stick with it and wait for updates.

Hopefully we’ll get exclusive mode at some point too!

Oh, and thank you for restraining yourself from mocking me and my Ani Difranco albums.

I really like the app layout though, and the service is a no-brainer for Prime members. I’m going to stick with it and wait for updates.

wise for me to sack off Tidal.

Obviously most apps recognize the cover due to being in the same folder but have you tested using something like mp3 tag to embedd the album cover in the file? Just curious if that works

It’s not enough of a discount for Prime membership if you ask me. Looks like it’s still very early stages but how does it compare to Tidal?

There is a feature in the Amazon Music app where you can select a picture and assign it to the whole album. But I have something like 600 albums. I don’t have that kind of free time!!

The app is still better than Tidal. I’m hoping the experience will get better, though. It’s somewhere between Tidal and Spotify. There’s no MQA, but there are a surprising amount of 24/192 tracks, with the majority being 16/44.1

Ah okay haha i get that!

finally.
Now if they can just publish an API, so I can build a simpler UI that works on touchscreens.
It’s impossible to set the volume in the current one.

Not too sure about that, I use Amazon HD on my MacBook Pro and check the the Loudness normalisation in the General-Advanced settings?

Amazon uses MP3 encoding, and MP3s encoded without headroom can decode with clipped peaks if careless decoder implementations are used. Anytime you use a web player for MP3s, just assume it’s carelessly implemented and expect to hear clipping distortion where none may be present in the original file. (Had the same thing happen with Google Play.)