How much difference do you feel DACs make with speakers vs headphones??

It depends, I think generally source gear changes tend to be more apparent on speakers overall given equal tier comparison of headphones, but that being said depending on the headphone setup it can make an equal difference or possibly easier to hear on headphones. This entire comparison was done with headphone setups being the only thing used to evaluate for example. Depends on the tier of the headphones and the tier of the speakers as well. Imo a dac is going to make a larger sonic impact on a pair of midrange speakers rather than midrange headphones for example, but I think getting into the higher end side of things it can equal out at some point. But overall speakers just have a higher performance ceiling so eventually it will lean much more toward speakers as you continue to go up.

I seem to notice a much more apparent difference with floor speakers than headphones. Is this normal or do you all find that you hear the change in DACs with headphones as well?

I can easily see that being the case depending on the specific setup at hand. Also really depends on what sonic aspects you are looking for. Anything spatial recreation wise is going to be more apparent on speakers than headphones imo, while perhaps let’s say resolving power might be more equally apparent on headphones and speakers. But it’s hard to make generalized statements that end up being mostly true, so I’ll just boil it down to it depends on the setups you are trying to compare imo

thank you as always MON.

I remember Elac when they launched their Uni-fi UB5 that people were raving about at shows, they had a lot of high end hardware upstream for that very reason. Some midrange speakers can scale VERY well.

I think a midrange speaker that can scale insanely well is the magnepan LRS, you can absolutely pump that thing up to crazy amounts source gear wise and still get rewarded for it (but that can be a problem since it sounds pretty bad with lower end source gear, double edged sword)

One I’d love to have in a collection. If I downsize to an condo, I’d seriously consider them simply because you can pick them up, move them to where you want when you listen, then move them back when you’re done.

Spring 3 DAC is now ready to order for those interested…

M0N got a shout out from Z’s vid today on the Soloist 3XP. Nice for him to give a bit of credit to your hard work! Even if he can’t hear differences between Dacs 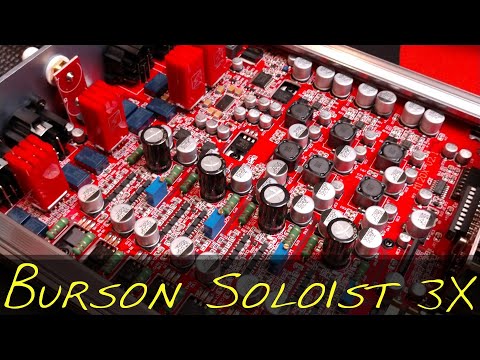 Spring 3 KTE w/o preamp module in the queue

The price of my Burson Conductor 3XR just went up. It’s an even better amp and power section in that. Maybe it’s time to sell!

Hope mine comes earlier than yours! lol kidding

I got w/ preamp mainly for future proofing and resale value. Plus I am curious how good it really is…

Got my shipping notice today. 11 days from order

If I had to make a list of dacs to start off with I would want to include that I have had adequate experience with (confident enough memory to compare against each other as long as it wasn’t super detailed comparisons), it would be the following (all can be found used less than 5k):

So this is totally selfish and silly, but I ended up buying an Exogal Comet Plus, so now I kinda want to see it included in the comparison whenever that happens, lol.

Spring 3 KTE w/o preamp module in the queue

Also, I’m definitely excited to hear from you all who bought the Holo Spring 3 when they arrive! I hope you love it!

EDIT: Linking to the Holo Spring 3 thread since posts got moved over there:

This is the official thread for the Holo Audio Spring 3 DAC [image] This thread is for discussion and reviews. Balanced R2R Improved Input Implementations from Gen 2 3 Levels, Preamp Option

This Spring 3 has been damn impressive so far to me. Really enjoying it!

There is no bypass option, but I was told that setting it to 94 will do the same thing.

Be interesting to see if the price point remains the same for new units, also what the upgrade will cost.
I saw a yggy earlier today and thought about it. I have not heard one but I would like to very much.

From what Jason recently posted the YGGY 2’s are waiting on motherboards and analog boards to ship again…its been a long wait time.

Also Mike and his partner Dave have each picked an analog board and will see if both of these are offered as well as the original ?

Price ? Have no idea.

So this is totally selfish and silly, but I ended up buying an Exogal Comet Plus, so now I kinda want to see it included in the comparison whenever that happens, lol.

Hmmm we’ll see, that could be arranged lol, been really busy lately but working on it

Also nice grab on the people here who bought a spring 3, hopefully you all are enjoying it

Going to be able to get a spring 3 kte in to borrow, will end up including that and seeing how it holds up to the may kte as well (at least from memory), should be interesting