I just read something confusing, so explain how dBA works…EMLi5.

a sound around 50dBA is compared to the roar of a jet engine…or the fan cooling system in a server, but, in an article talking about stuff for homeschooling, they suggested some headphones for kids that max out at 85dBA, which they said is the maximum audio level recommended.

jet engines are damn loud…so loud I do not want to be around them for very long…unless it’s a fighter jet or something where I can watch flame. anyhow, I digress…explain how 85dBA is the recommended maximum we should ever listen to when 50dBA is as loud as a jet engine, which you don’t want to be around as it’s so loud it hurts.

dB is foremost a logarithmic scale, it is often used for audio because our hearing works logarithmic too.
(Actual unit is “Bell”, the lowercase d is the metric prefix for 10)

The capital letter after the dB is the weighting.

As for “how loud stuff is”: 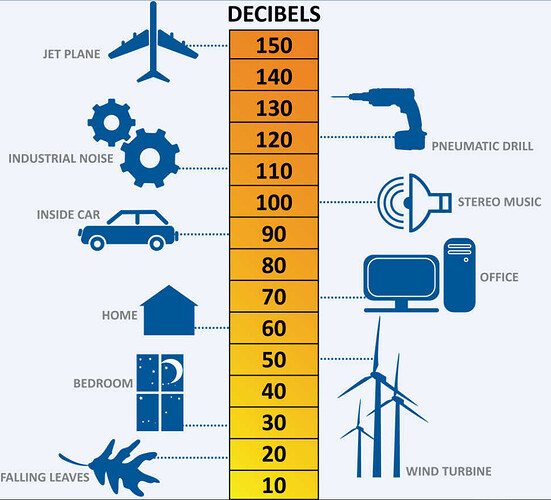 OSHA says 90dB(A) is max allowable for 8 hours per day. Take that as the absolute max ever.

what is meant by ‘weighting’?

and it seems I was off regarding how loud a jet engine is…but if 53dBA fans are so loud to be offensive, how do we enjoy music at 80dBA?

if 53dBA fans are so loud to be offensive

Offensive to whom? As defined by whom? Some may find it calming. Turn a fan on in your house and measure how loud it is. Then decide if a fan at that loudness is offensive to you.

I don’t know anyone who likes being in a server room because of the howling fans cooling them.

what is meant by ‘weighting’?

I don’t know anyone who likes being in a server room because of the howling fans cooling them.

dB is to determine if the sound pressure level, to check if it is safe to be around.

For determining how annoying a sound is (like the piercing whine of 1U rack fans), you would use Sone instead.

what dB do you personally listen to music at with headphones?

…but if 53dBA fans are so loud to be offensive,

Anecdote on fans:
I live in a small single-level condo with an open floor plan between my utility alcove and my living room. My furnace is about 30 years old with a blower that has always come across as “loud” to me relative to…well…being a furnace blower.

I recently dug out my old Radio Shack SPL meter and measured ~52-54 dB at my listening position in front of my TV when the furnace is running. That’s “loud” enough for my ears that I often have to raise the volume on whatever I’m watching to make out the entirety of what’s being spoken.