So… I finally decided to sell my Sonos Playbar and decided to get a pair of Klipsch rp600 m. Some have said that the speakers might be percieved as a bit bright so I understand it that a warmer sound Amp would be a good match.

The guy at my one of my local HiFi stores recommended the Denon DRA-800H
https://www.denon.co.uk/uk/product/hifi/amplifier/dra800h
720 USD
650 Euro
(Slightly more than I want to spend but I realize I might need to push my limit a bit higher)

I like that it is modern and feels future proof considering the kind of functions it has.

Well, what type of features do you want? You really don’t need to spend that much, and if you wanted that specific model, you can find refurbished receivers for cheap.

Also typically I am of the mindset that for something to be more futureproof, it would have less features on it (like a pure power amp with only analog inputs and a volume dial), so things like wifi or Bluetooth changing wouldn’t effect it (less things to go wrong)

Well you have a point there as far as future proofing. I guess I’m a convinient user so I like being able to stream and things of that nature. I will be using it for media such as Playstation and movies as well as listening to music. At first I was considering getting a surround amp/reciever but was advised not to.

I see what you are saying as far as less things to go wrong. Same applies to cars etc. More things to break once it starts aging. However… I do like the wifi connectivity option… bluetooth isnt as important

What about the Yamaha R-N303BL? Cheaper and has similar features. Although a word of warning, every receiver with WiFi has been a pain to set up and not a seamless user experience

Thanks M0N I will definitely have a look in to it! In the meantime if anyone else has any suggestions im willing to take them aswell and look in to them!

So I ended up getting the Onkyo TX-8270 after some discussion with a local HIFI dealer. He claimed that its common that Klipsch is paired with a Onkyo amp/reciever. 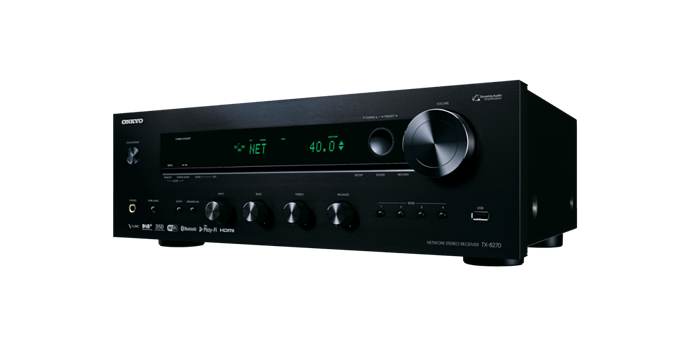 I won’t get my speakers for another 2 weeks (Bummer) so I wont be able to come with feedback for another couple of weeks.

Well, I hope you enjoy them when you get them lol

Congratulations on your purchase, I’m sure that will sound fine. Just for shits and grins I purchased a Klipsch Powergate amplifier when Amazon was blowing them out at $150 ea. At that price I was extremely curious and did not mind if it blew up. Well, I have had the Powergate now for 3 months or so, i currently use it as my primary audio set-up and I happen to have the Rp 600M’s and a set of Heressy I’s running to it as alternates. I have multiple other amplifiers to swap whenever i want but due to its ease of use currently and plethora of features along with it’s sound signature it remains my go-to. It annoys me that I have much “better” amplifiers relegated to the side and not being used almost daily. The combination is solid. It’s not “audiophile” approved but damned if it’s not fine for every day streaming and musical enjoyment. Enjoy your set-up. Cheers.

My powergate sadly overheated and just completely died. Was a nice unit for 150, but I had issues with firmware and then overheating

Ah damn, sorry to hear that. I had my own concerns and spent $15 on a pair of small fans that i mounted to either side to provide constant airflow thru the chassis. Works like a charm, no heat issues to date. Also, the software upgrades Klipsch provide recently have fixed any bugs that plagued the units. I use play-fi without issues currently. There is a ton of value in the units that are moded for heat issues and have the software upgrades applied.

Mine would cook an egg as long as it was plugged in. An update also bricked my device, and I had to re flash the older firmware. Never did use play fi though

Lookin for an amp for similar reasons. Thought i will go full tube, but maybe should get a proper solid state first. The Loxije wedge amp is a good little boy, but I have a feelin that im missing out on something.

Thanks for any ideas!

The Cambridge amps are pretty nice for the money. I would definitely if you can go for that PM17 if possible. That’s a great amp, really great sound

I actually have just gotten my new rp-600m and I’m in the same boat, realistically im just looking for something under 200 that’ll work for the time being while I save, any ideas?

Amp only? I just got Onkyo A9110 for 215 euros here in Europe. Great amp for that price, but its only an amp - your gonna need a seperate DAC.

That onkyo is a pretty great amp, definitely worth its salt

If you just want an amp Emotiva A-100 would be a sold choice.

Hi… I got a pair of the RP-160M monitors about a month ago and I’m really impressed with them. I bought them to use with my Dynaco ST-70 and they work very well with it. The Dynaco produces 40 rms watts per channel and will drive them to any reasonable level with no trouble. I also have an Emotiva XPA-3 that puts out around 300 rms watts per channel in stereo mode but I haven’t had a chance to hook the 160’s up to it yet.