so with the studio series sale I was thinking. mount a 520c on top of a 550p sub for a traditional 3 way design horn load! mount them on short stands with iso feet on the sub and thin layer of foam for the 520c

I have not read any reviews of the 520c, but based off of other centers vs their bookshelf counterparts, I would imagine the 520c sounds like the 530’s with increased low end punch from the additional woofer.

Maybe i am wrong, but to me seams like you would get a really good sounding system for pretty cheap right now doing that.

I personally think the studio 530 would just be the better choice imo, as the 520c is meant to be a center channel, not a full range speaker. Also the sub and the center may cause sound issues since you would want to cross over the frequencies, and tbh I don’t think it would sound as coherent as a 530. Also the 530 puts out a decent amount of bass (more than you would think at first)

I C, one can dream haha. was a thought, would of looked good to me together =) 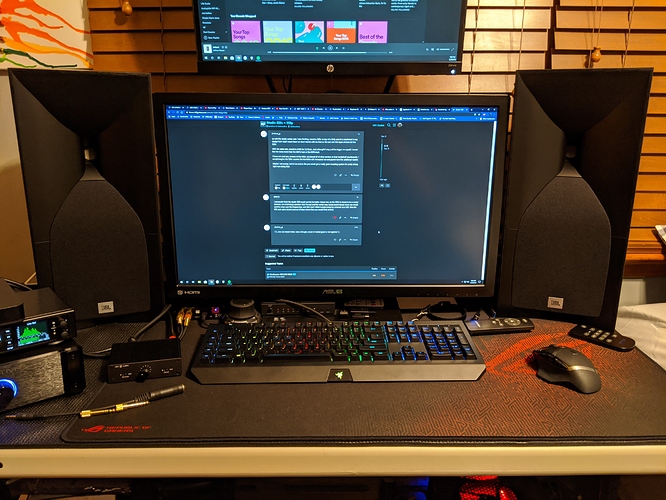 they look great man! i really need to change from a corner desk to have more speaker room lol

those are some nifty looking speakers. they almost look like some form of fancy microphone!

? What mic are you referring to (just curious)?

in the picture…that looks like a giant mic port. look at your phone…look at the speakers. comprende?

I mean, I guess I don’t see it lol. Mic port. Hmmmm

Currently running the 530s with the 550P as a sub. I would say that is the much better system. A center speaker is more useful in a home theater situation in my opinion than in a music system. Or in a very large room where your left and right might lack the power to fill the entire room. A center speaker is not the best in terms of imaging either as it tends to compress the soundstage. At least in my experience.

Yeah, I’m getting that now lol. Do not have a lot of experience with centers, did not realize they tuned them differently. Would look good though

Yeah, I kind of get ya. i found the 530’s a bit ugly at first. But they honestly look better in person, especially on the desk as a system. Might just be me though. My gf found them to look nice as well so they passed her WAF at least.