How I became a fan of SVS…

Needed some new towers a while back. Was looking not to break the bank and spice up movies at home. Had to also not have giant foot print. Was and still am really been missing movie theaters. For my health am still staying in. My front left and right were just a set of old Aiwa speakers. But all of sudden one stopped working. I thought they sounded pretty good. (I knew nothing)
After playing the debate game took a chance on a set of the SVS Prime Towers. Waited for the fedex guy ackwardly peaking out the blinds until they showed up. When they did… rushed outside… learned in that moment theyve got a lot of gravity lol. They’re built solid. Got them setup that night after being zoomed to death at work.

Man I didn’t know… first piece of music I listened to on them, they vanished… heard about speakers doing that. But gone… just great sound.

After that suddenly I wanted to listen to every song in my collection again.

They reminded me of studio monitors, but they weren’t near field… it was across the room. It’s not a small room and these things just flooded the room with sound.

This was a great discovery.

I’m not cool enough to get into measurements and that stuff, but I’m a happy camper,

My other runner ups were Elac, JBL, and Klipsch.

After a couple months though SvS got a lot more money for some more prime goodness. Passing on if anyone else is slowly wanting to build and not break the bank, 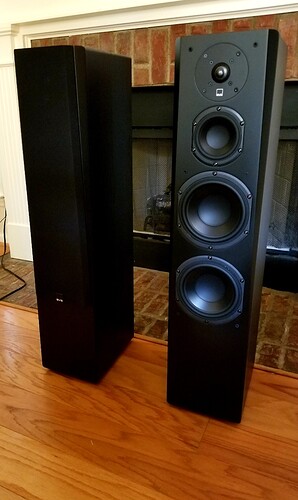