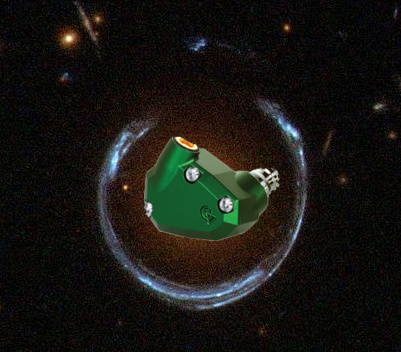 Did you know the Campfire Andromeda is so good it has a ghostly halo that can only be seen under ultraviolet light? 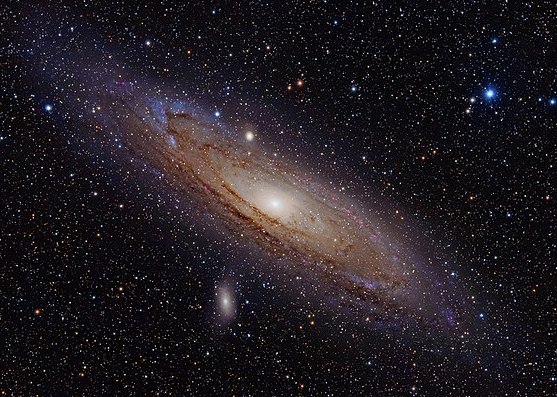 Kidding of course. I’m actually going to go on about the astronomical Andromeda. Surely, if there can be OT threads on topics like movies and whisky, why not one on the greatest real-life adventure of our time — scientific discovery? Here’s my inaugural contribution. Hope other folk will follow suit and add relevant posts of their own. 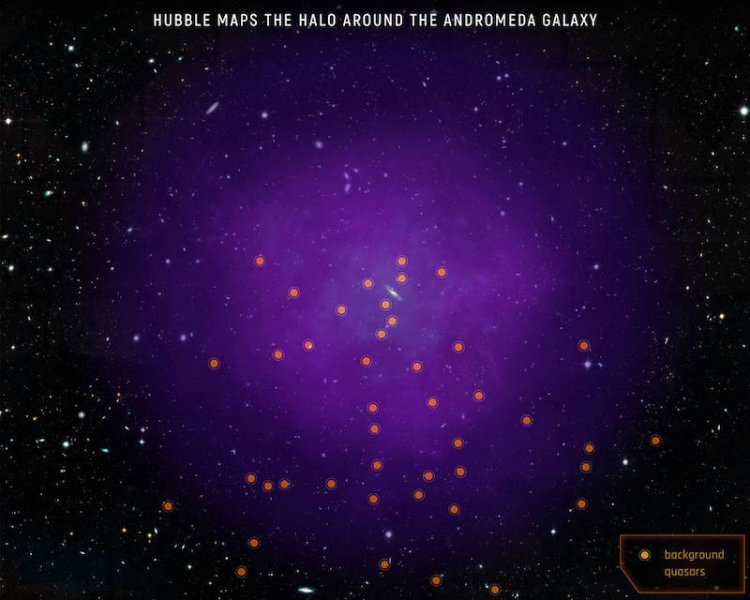 Andromeda_halo_with_quasars750×600 76.8 KB
The AMIGA project just published their findings as to the chemical composition of the million light-year extending gaseous halo around our next-door neighbour, the Andromeda galaxy. Every galaxy has a halo, or sphere of particles that drift away from the main part of the galaxy over time. Very interesting, I’m sure, if you happen to be an astrophysicist, to know what that’s made of. Nice to know there’s a fog of heavy element atoms out there just waiting to be harvested (grin). What boggles me is how they made their measurements. They merely used the Hubble telescope’s spectroscopy attachment to take the spectra of the ultraviolet light of 43 quasars located behind a broad region around Andromeda. Then they merely calculated what was missing from the quasar light, which gave the fingerprints of the chemicals in the halo gas.

When I was a teenager the word quasar, like the word quark, was this mysterious outer space enigma that Sunday supplements loved to wax on about. There were these things smaller than galaxies, but brighter, that were so far away the new and huge Palomar telescope could just barely “see” them at all let alone show any detail. Seemed impossible. I doubt there were 43 quasars located back then in all of space, let alone in the vicinityaround Andromeda.

On top of that, astronomy at the time wasn’t and couldn’t be done on ultraviolet light from other stars because the earth’s atmosphere absorbed it. Instead, radio astronomy was the big new thing, going in the opposite direction to very long wavelengths. (I thought radio astronomy would be nearly useless, given how little resolution it could provide. Boy, was I wrong about that.) 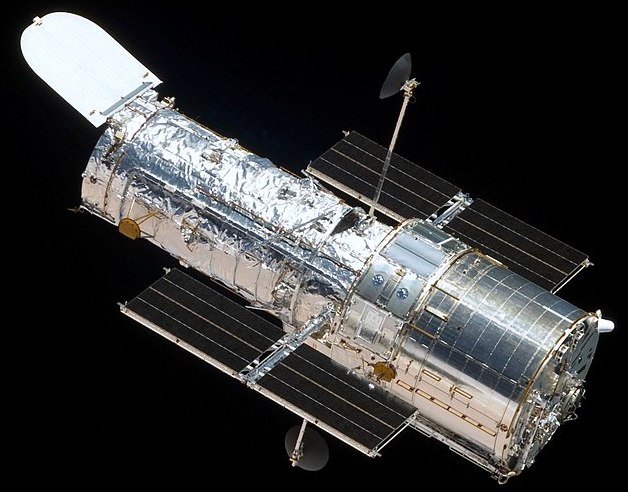 Eventually, the Hubble scope was put in orbit. I can still vividly recall the punch-in-the-gut feeling when the first testing showed the mirror had a built-in out-of-focus error to its shape. You could drink yourself silly, take off your glasses and still see better than that. Then a few years later, came the thrill of the exactly opposite emotion, when some truly wizardly computer+math work provided a pixel-by-pixel data correction that effectively put a 20-20 pair of eye glasses on the Hubble’s telescope. Everyone’s seen the spectacularly gaudy false-colour astronomy photos over the past several decades that resulted from this fix. But the Hubble could do ultraviolet? Again, if someone had told me I would have shrugged. 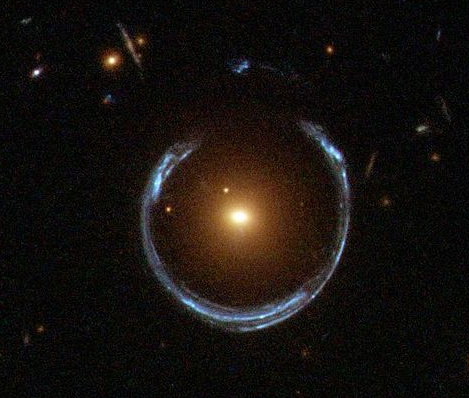 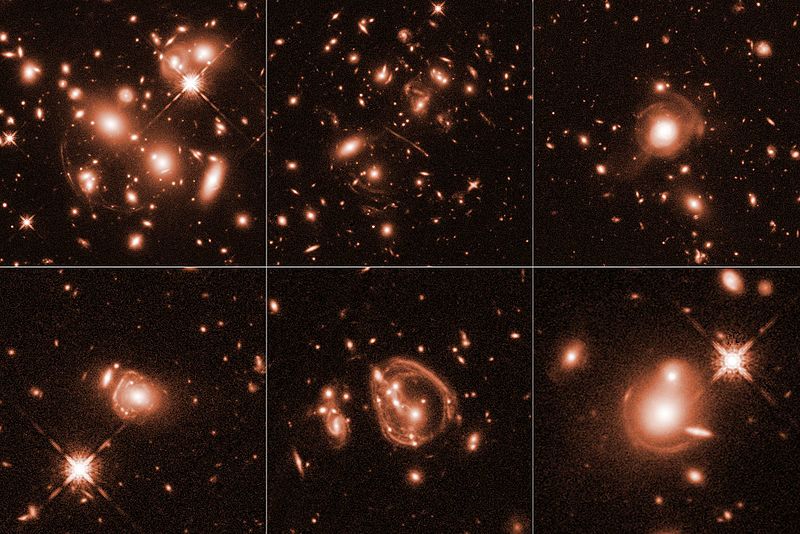 Hubble_captures_gallery_of_ultra-bright_galaxies800×534 103 KB
A similar slight-of-hand magician’s trick that’s now being done routinely in astronomy is to use the gravitational lensing effect from one massive but distant object to learn the secrets of some even more distant and fainter object behind it. In the upper of the two photos above the light from the central red galaxy warps the light from an otherwise hidden blue galaxy far behind it into an apparent blue ring around it. Gravitational lensing. The term would have been meaningless to my teenage self or any science supplement writer at the time. It would have sounded like the Galactic Lensman of E.E. Doc Smith’s space opera novel series. In fact, it’s a turbo-charger for light magnification that the universe provides absolutely free of charge for anyone with the smarts to figure out what’s going on. 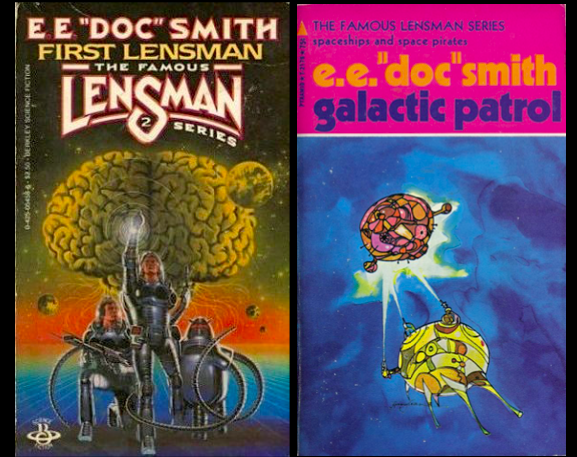 Yet the same principle — predicted by Einstein’s general relativity — was used in 1919 to provide some early proof that the theory was correct. Sufficiently strong gravity along the way bends the path light travels along from point A to point B. All you need are computers a million times more powerful than the vacuum tube or discrete transistor monstrosities of that era to again untangle the complexities of that gravity/light tug of war.

most people are aware that the Andromeda galaxy is on a collision course with our Milky Way, bu know it won’t happen for billions of years still. it’s estimated to be 4.5 billion years, but today I learned that Andromeda has already made contact with the Milky Way, in that it’s gas cloud has met with the Milky Way’s. it’s like the Oort cloud surrounding our solar system, but on a galactic scale that makes the galaxy within small. buuut…it’s so diffuse, you can’t see it.

and damned if I cannot find where I read about it this morning so I could post the source. sorry

damned if I cannot find where I read about it this morning so I could post the source.

In a landmark study, scientists using NASA's Hubble Space Telescope have mapped the immense envelope of gas, called a halo, surrounding the Andromeda galaxy, our nearest large galactic neighbor. Scientists were surprised to find that this tenuous,...

Yep, that’s another part of the AMIGA project’s findings. Using the quasar trick helped them to get a more accurate read on the size of Andromeda’s halo. We can’t know, but assuming our galaxy’s halo is roughly the same size since our galaxy itself is roughly the same size, and given the Andromeda halo covers half the distance between the two galaxies, the two halos would now touch at their edges.

So that’s like the cloud of droplets around one covid carrier who is 12 feet away from a second covid carrier. Their respective covid clouds would overlap half way between them, grin.

I’m not the only space nerd here huh? Lol

I’ve got about $5K in scopes. granted…they haven’t been used in about 4 years

now all that said, I’m just an observer, I’m not actually interested in the math behind it all. I only want to see stuff!

same as my audio…I want to hear stuff. I’m not interested in the math behind it.

I’m a manufacturing engineer/CNC machinist, so the math is in my nature lol

The most interesting thread starter I have ever read on this forum.

I’m all thumbs around machinery myself, but my respect for machinists verges on limitless. My son showed a knack with gadgets, so I urged him to become a machinist, but no joy. Is there even one aspect of our daily lives that wouldn’t disappear if some machinist hadn’t figured out a clever solution to its production?

Andromeda galaxy is on a collision course with our Milky Way … 4.5 billion years

For most of my life the Big Future Catastrophe was the sun going red giant ~5 billion years from now. Turns out the sun’s luminosity is steadily if slowly increasing. In a mere 1/2 billion years, give or take, the resulting heat rise will cause so much geologic CO2 absorption that current forms of photosynthesis will become impossible. Things get worse from there. Plus, odds are high that a star will go supernova close enough to the earth to cause a mass extinction event before the CO2 problem becomes a thing.

So the current global warming thing everyone is so hyped up about will just be a good kindergarten practice run for the real thing. If by chance we survive that and all other forms of human stupidity, the human race or whatever it morphs into will have to start getting serious about moving the earth gradually further from the sun and moving the sun gradually right out of the galaxy. This may have been a decent neighbourhood to get started in, but it’s gradually going run-down, is ear-marked for demolition, and needs to be abandoned. Timeline here.

Can’t remember what future catastrophe scenario video it was that i lastly listened but the end of the Earth. Was probably / maybe caused by 1 of the 2 different scenarios.
When the actual planet goes.
Milky way and Andromeda Galaxy “slow crashing” or things related to event’s that happen in the process.
Or the Sun expanding in the process of running out of “fuel”. Just heating everything here up to volcano land before absorbing it fully.
The gestimate was around the same, few billion years.

At least the very end come when the “crash” happens and both black holes start to meet.
Kinda would be nice to know, what will end in the end. Can be just a random simple meteor or gammaburst out of no where, also in the galactic crash scenario. Both of those and more some start to be more likely.

It would be nice to see “unified earth” or Empire of Earth. Every nation and people would be united and not ruled be some moron/morons and the big goal would be survival. In the near future just not destroy the planet and resources… in the big picture evade the 1-2 end scenarios.