This good, or something else?

I’ve noticed I have a bad habit of flipping between different projects, though it tends to be adjusting plans of some I’m wanting to do in between spurts of working on particular projects. Current project is the front end on my truck (rack and pinion have more slop then I’m happy with). Either way, audio system is still in planning, but I’m certain I want to make my own RCA cables. Haven’t locked down on the connectors, so if there’s some shorter ones anyone could recommend, that would be great.

Sorry about the rambling, as this is about the wire itself. I’ve found this:

Audtek 13 AWG 2-Conductor OFC Portable Speaker Cable 100mThis Audtek Electronics cable is designed from the ground up to guarantee the best possible transfer of signal from your amplifier to your speakers. It also possesses quality materials and...

I’m fairly dead set on using OFC cable, and this isn’t what I’ll be using for the speakers themselves. I’m aware this is more then likely much longer then what I’ll need, though it would be nice to have extra to make some to use at home or a buddy who keeps insisting he wants me to do his audio system in his car.

Now that all the details have been laid out, would this be good to use, or is there something that would be better for my use case?

I personally like using canare since it’s super flexible and made for professional setups. You choice looks good as well but I don’t have any experience with it.
Oh for connectors neutrik rean or amphenol are great. They aren’t super small but that’s good when you go to solder the wires.

personally like using canare since it’s super flexible and made for professional setups. You choice looks good as well but I don’t have any experience with it.

I’m planning on replacing the carpet(it’s still original, and I’ve tried cleaning it multiple times and can’t seem to get stains from a previous owner out) and using some sound/thermal insulation when I run the cables. I’m thinking of trying to run the cables under the carpet to the back wall where I’ll mount the amps (I’m kinda giving in on the idea of trying to do a single five channel amp and going for septate singles.) I’ll try doing the speaker wire at the same time, using the same path back up to the front for the front channels, running the power cables along the door sill back. Allot to tackle at once, yes, but I think I can manage.

Oh for connectors neutrik rean or amphenol are great. They aren’t super small but that’s good when you go to solder the wires.

I know that those are both reliable connectors, though I’m concerned about space constraints and wanting to avoid too many tight bends.

Doing all at once is the best when removing the carpet, it’ll make things super easy. 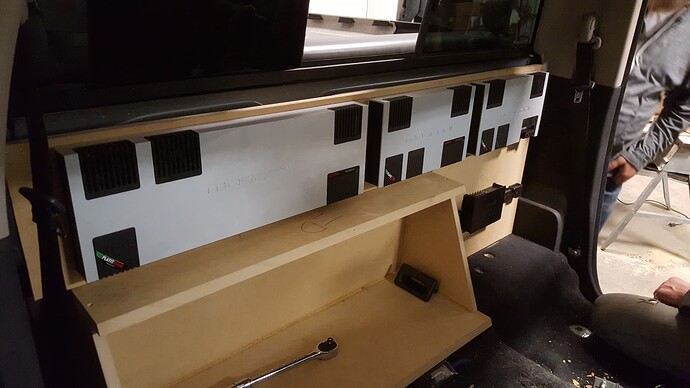 Yeah, I’ve got an extended cab, so my run might be a bit longer. I’m planning on this for speaker wire:

And this stuff for power/ground (I’ll pick up some in black for ground).

As I’m gonna do the big 3 upgrade and throw in a stronger alternator, I’m also going to grab some 1/0 cable for that. I like going a little overkill sometimes… Sue me.

I was going to say the 10 gauge might be a lot of overkill for regular speakers lol. Largest I ever use is 12 but that’s because I had the potential of sending 350w to each driver. I almost always use 0/1 for power and ground so it can support any future modifications. Plus fused distro blocks are cheap insurance and splits it down to smaller wire if you want.

If you get a chance check out knukoncepts. Their wire used to be very reasonable and very flexible.

Edit: I could go Focal Integration series, though they can’t handle the same amount of power

Are you using the mdf as a spacer? If is I found ABS sheets you can order from Amazon a little better to work with for mounting.
JBLs will be fine over the focal. I find focal on their economy lines to have really sharp treble.
Any sub in a small cab would do all though something like a JL TW6 would be great but very spendy. Also take a look at image dynamics as their sub works great in low air volume situations.

My stupid self tried going against what Crutchfield was saying would fit and got bit for it. 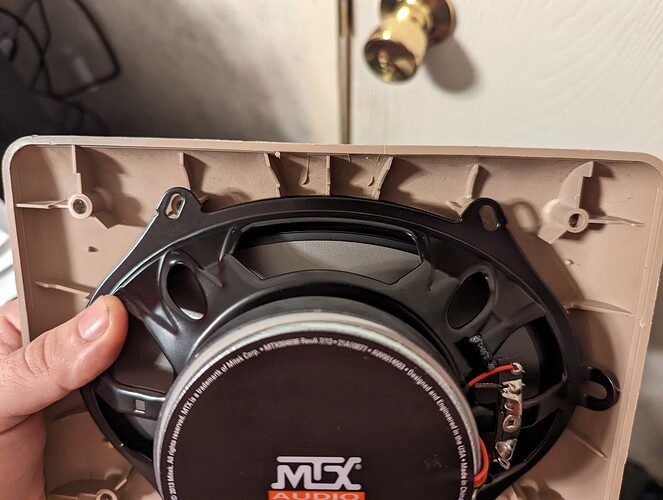 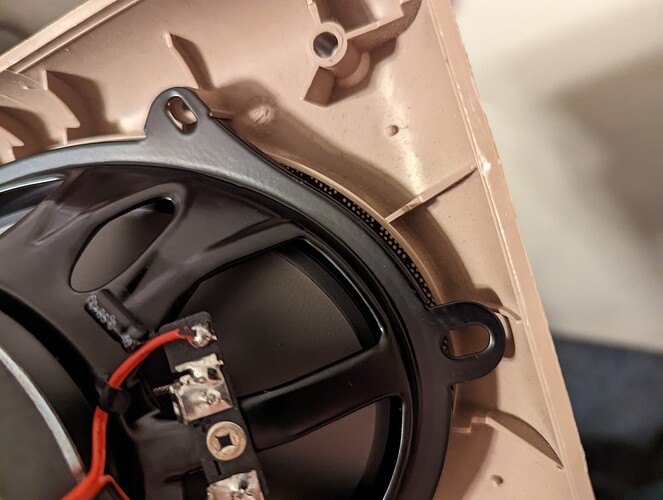 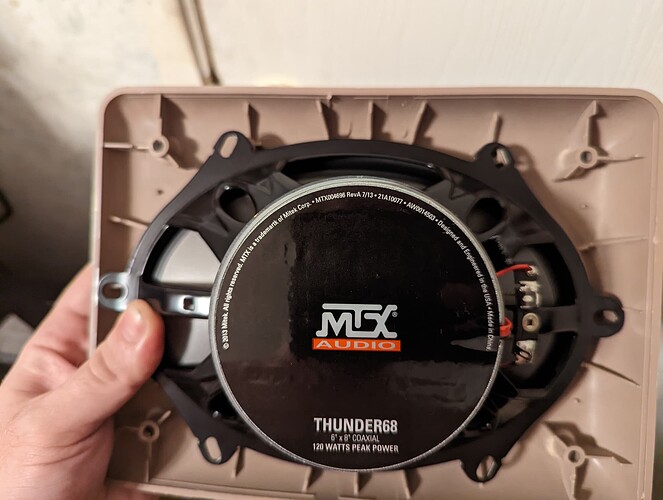 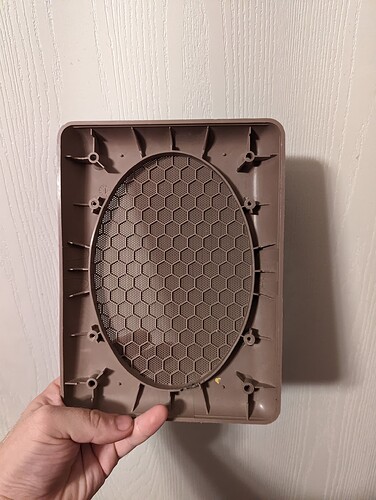 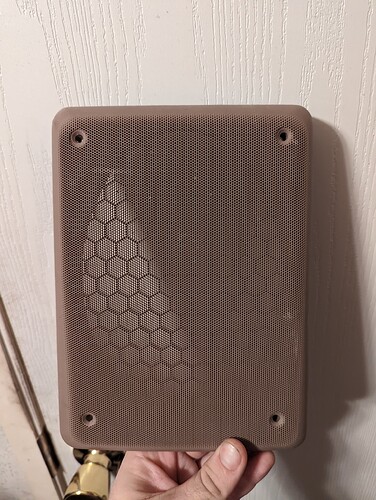 Nope. Noticed there was a question asked about the hole pattern. The distance between the holes is greater on the stock one by less then half an inch, but it’s greater either way.
Looks like I’m stuck either making my own replacements or stuck buying an adapter like this: 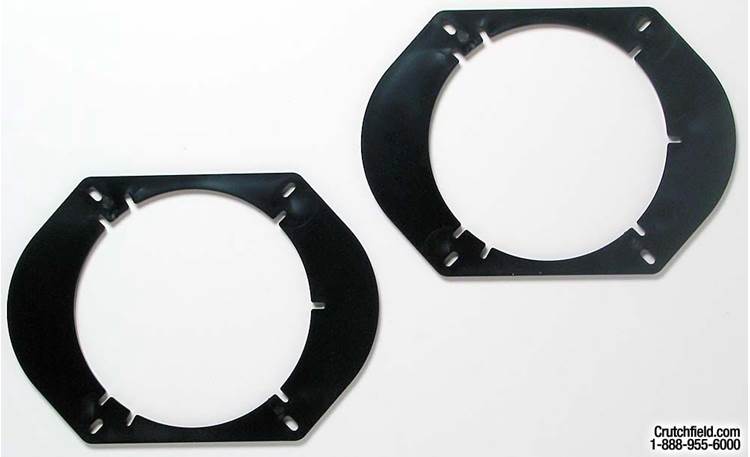 If I did a little modification, I might be able to fit this in 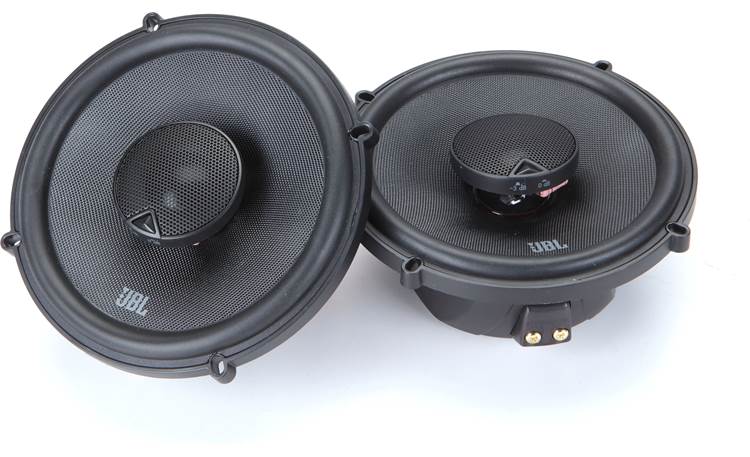